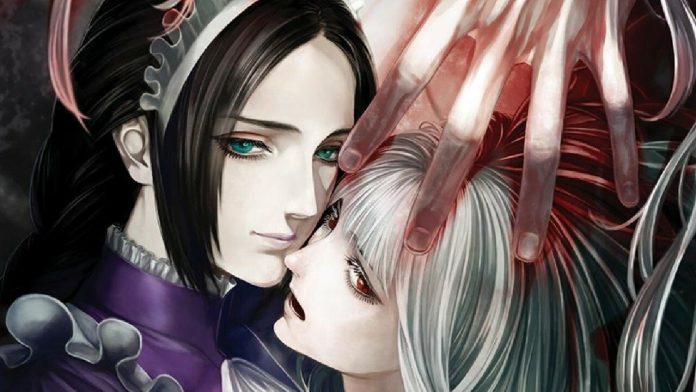 This is going to take a little bit of explaining.

There is a game called “The House In Fata Morgana” that first came out in Japan in 2012. It eventually trickled its way onto more platforms, including iOS, PS4, and 3DS, but it wasn’t until 2016 that Western audiences were able to play it. And then, just last month, it finally came to the Nintendo Switch, where it was received extremely well.

So well, in fact, that it’s the first game to ever score a perfect 100 on Metacritic. And that’s precisely why I’m here.

For the past month and a half, every now and again, I’d notice that people were prodding us about a House In Fata Morgana review. We don’t review every game, because there’s not that many of us, and we have to sleep sometimes, but the combined pitch of “people really like this game” and “ROLL UP, ROLL UP, COME SEE THE GAME THAT’S HIGHER-RATED THAN BREATH OF THE WILD” naturally piqued my interest. I pitched a review to the editors, they said yes, and a code was acquired.

After playing for a few hours, and realising that this game would probably require a bit more explaining than a simple 1000-word review, I asked the editors if I could also write a diary, of sorts, to get all my feelings across. Again, they said yes, for some reason. I think they trust me too much.

It was then, and only then, that I looked up how long the game was. THIRTY TO FIFTY HOURS, the estimates read. Do you people think that I am made of time? I am not made of time! However, The House In Fata Morgana is. What a good segue.

The House In Fata Morgana is a game that I knew nothing about, prior to booting it up. Perhaps that is the best way to play it. My cursory research — because I don’t want spoilers — told me that it was a visual novel, set in a spooky cursed mansion. The key art told me that it starred a pale lady with black hair, a pale lady with white hair, and a… hand. Of some kind. A quick, spoiler-free scroll down the gigantic Wikipedia page told me that whoever made the Wikipedia page had too much time on their hands.

So, I entered the world of The House In Fata Morgana expecting… I don’t know, really. Romance? Spooky stories? Pale women? Hands? I’ve been playing for somewhere between five and ten hours so far, and I’m still not really sure what the game is about — or, to be honest, what makes it a 10/10 game.

But I’m not disappointed. Not even slightly. I don’t think I’ve been this intrigued, excited, and utterly confused in a long time. So far, I’ve had at least three moments that made me gasp out loud, and at least one that made me loudly swear. For those in the know: the gasp was wig-related; the other three moments involved blood, a curse, and a painting. For those not in the know: doesn’t that sound exciting?!

Living up to the legend

I really don’t want to oversell this game, because part of the joy I’m getting from it right now is from the fact that I have no idea where this is going. There’s an element of time travel, which means the plot keeps changing, and my main character is an amnesiac, so I have no idea who I am, where I came from, or what’s happening, even in the game.

I am almost sure that there will be some incredible twist, because there have already been at least four twists in the two different stories that I’ve been playing, but I’m hoping that the twist will be a mechanical one, not just a narrative one.

Here’s the thing, though: I’ve been playing this for hours, and I have made one choice. It was right at the beginning, and I was asked to decide whether or not to say good morning to the Maid. I did say good morning, for the record, but I don’t think it made much of a difference. The rest of the game so far has been on auto-play, like a book that’s reading itself, plus nice pictures.

I want The House In Fata Morgana to live up to the feeling I currently have, that this game will miraculously turn out to be so brilliant that it changes my life. I’ve only ever given out one 10/10, and that was for Kalimba, an Xbox One-exclusive game from a now-defunct studio (and I stand by it, that game is fabulous), so it’s going to take a lot for me to be won over. But I want to be won over, so it’s also going to take a lot to convince me that this isn’t a brilliant game.

If you’ve read this far down in my first Fata Morgana diary entry, then you perhaps are prepared for spoilers. I’ve steered clear so far — but it’s going to be hard to write further entries (yes, I forced my editors to let me do multiple diary entries AS WELL AS a review) without telling you the story.

Let me tell you what’s happened so far.

I woke up, with no memory of who, or what, I was. I seemingly have no name, and I haven’t seen myself, despite at one point walking past a mirror. A strange, kinda-creepy Maid is my only companion, and she’s currently showing me around my house, a large, dilapidated mansion. But there’s a twist: the mansion’s doors can occasionally also work as glimpses into the past.

The first door took us into a story set in 1603, about Mell, the eldest son of a noble family, and his irritating sister, Nellie. When a mysterious-but-super-hot girl turns up one night, Mell falls in love, and so, you can forgive me for thinking that perhaps the story of Fata Morgana would be about Mell and The White-Haired Girl’s relationship.

NOPE! That story went on for a while with not much happening and then QUICKLY took a detour into straight-up incest. I wish I was joking, or being hyperbolic! I’m not! There’s a lot of incest! I spent a full fifteen minutes yelling “WHAT THE FUNK” except I obviously wasn’t saying “funk”.

Eventually, after around, I would guess, four hours of that story (of which only the last 30 minutes were incest-y), the Maid took me to another room, and another chapter. This one is the one I’m currently halfway through, and so far, there hasn’t been any incest, touch wood.

It’s like talking to an adorable-yet-coy toddler who doesn’t want to reveal where she hid mummy’s passport.

This story is about a “beast” called Bestia, who wants to learn how to love, but also really loves eating people, which is a problem we can all relate to. But guess who turns up in the middle of one of his cannibal banquets? THE WHITE-HAIRED GIRL from earlier!! But how can that be? Is she over 100 years old?

…I don’t know. I spend a lot of this game with my brow furrowed, fielding questions from my confused partner (who’s only seen parts of it, and thus assumes he’s missing some of the context) by patiently explaining that I don’t know the answers, either. The Maid who’s been narrating all of these stories just says things like “teehee, I guess you’ll find out” and “hehehe, maybe you’ll remember.” It’s like talking to an adorable-yet-coy toddler who doesn’t want to reveal where she hid mummy’s passport.

The verdict so far

But that’s as far as I’ve got. It feels, up to this point, like someone who’s just read me the entirety of Game of Thrones, and then followed it up with recounting the story of Resident Evil, except one of the characters is Jon Snow. I don’t know what it means. I don’t know anything. And I love it.

Is The House In Fata Morgana better than Breath of the Wild, though? Well, that seems like an apples-to-oranges comparison, and also, again, I don’t know. This is just Part One of the diary, after all, but I’m not sure if I’ll ever have an answer. The game changes what it is, and what it’s about, every couple of hours, and while it’s presumably building up to A Point, I couldn’t even begin to guess what it is. Breath of the Wild is full of delightful, surprising, and unexpected moments; House In Fata Morgana is an ever-shifting, diaphanous blob of WTF. I haven’t felt this thrilled to dive back into a game since… well, since Breath of the Wild.

I guess we’ll find out the answer together. Tune in next week.