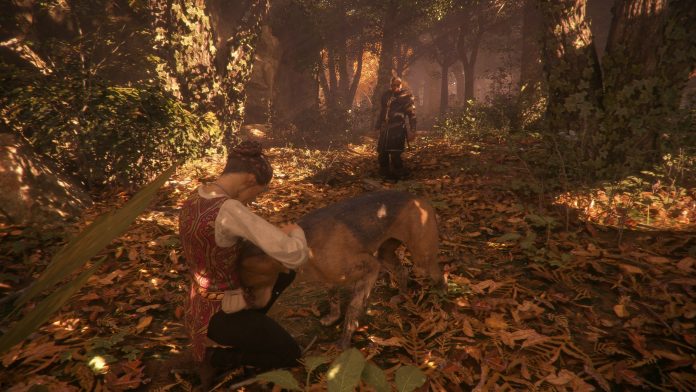 In some ways, A Plague Tale: Innocence is a triumphant narrative adventure bursting with originality, boasting a setting that we really haven’t seen in this space before. However, it’s often held back by failing to capitalise on so much potential.

Death is so commonplace in videogames that you quickly become numb to it. Our brains are smart enough to separate what’s real from fiction, recognising a gory mess of pixels as a false illusion. I can watch people get torn apart by gunfire in games for hours, but put me in front of a real life UFC fight and I’ll quickly feel uncomfortable.

A Plague Tale: Innocence questions this tried-and-true notion, making me grimace at the acts I was responsible for, navigating mass graves amidst rotting fields as the Black Death ravages 14th century France. Its world is battered and broken, echoing the hopelessness many must have felt as disease obliterated the population.

Asobo Studio has crafted a startling narrative adventure that doesn’t hold back, showing what its young protagonists must do to survive and save the ones they love. It’s undeniably flawed, held back by clumsy acting and an inconsistent story. But despite all this, A Plague Tale manages to stand out.

Amicia’s life starts off all sunshine and rainbows, but very quickly turns upside down

You play as Amicia De Rune, a young girl who belongs to a wealthy family. So far, they’ve remained safe from the plague, inside a bustling estate. Peasants cater to their every whim, ensuring Amicia will never want for anything so long as her family remains in power. A Plague Tale’s opening is a solemn moment of beauty, grounding me in a setting I grew to love over the eight hour campaign.

It’s only sunshine and rainbows for the first twenty minutes until things take a disastrous turn for the worst. Amicia’s younger brother – Hugo – is harbouring a genetic secret that’s precious to The Inquisition, a fanatical religious group with a sinister ulterior motive. They’re ruthless, killing all in sight to track our heroes down. After a bloody pursuit, you manage to escape, commencing a brutal, coming-of-age journey.

Amicia and Hugo’s relationship is the crux of A Plague Tale, informing its emotional weight and mechanical nuance in equal measure. You’ll play as both of them throughout, but when together, Amicia will have to escort Hugo by the hand, ensuring he remains far from The Inquisition’s clutches. The desperate intimacy of keeping a loved one safe is prevalent throughout A Plague Tale, a driving force behind my admiration for it.

You’ll avoid enemies by sneaking through conveniently tall grass and hurling rocks at nearby objects to distract them. Stealth is rudimentary and rarely challenging, with The Inquisition being surprisingly easy to fool despite their reputation. Things will grow more complicated later on as you’ll need to contend with diseased rat and human adversaries all at once, darting between sources of light to avoid being eaten alive. 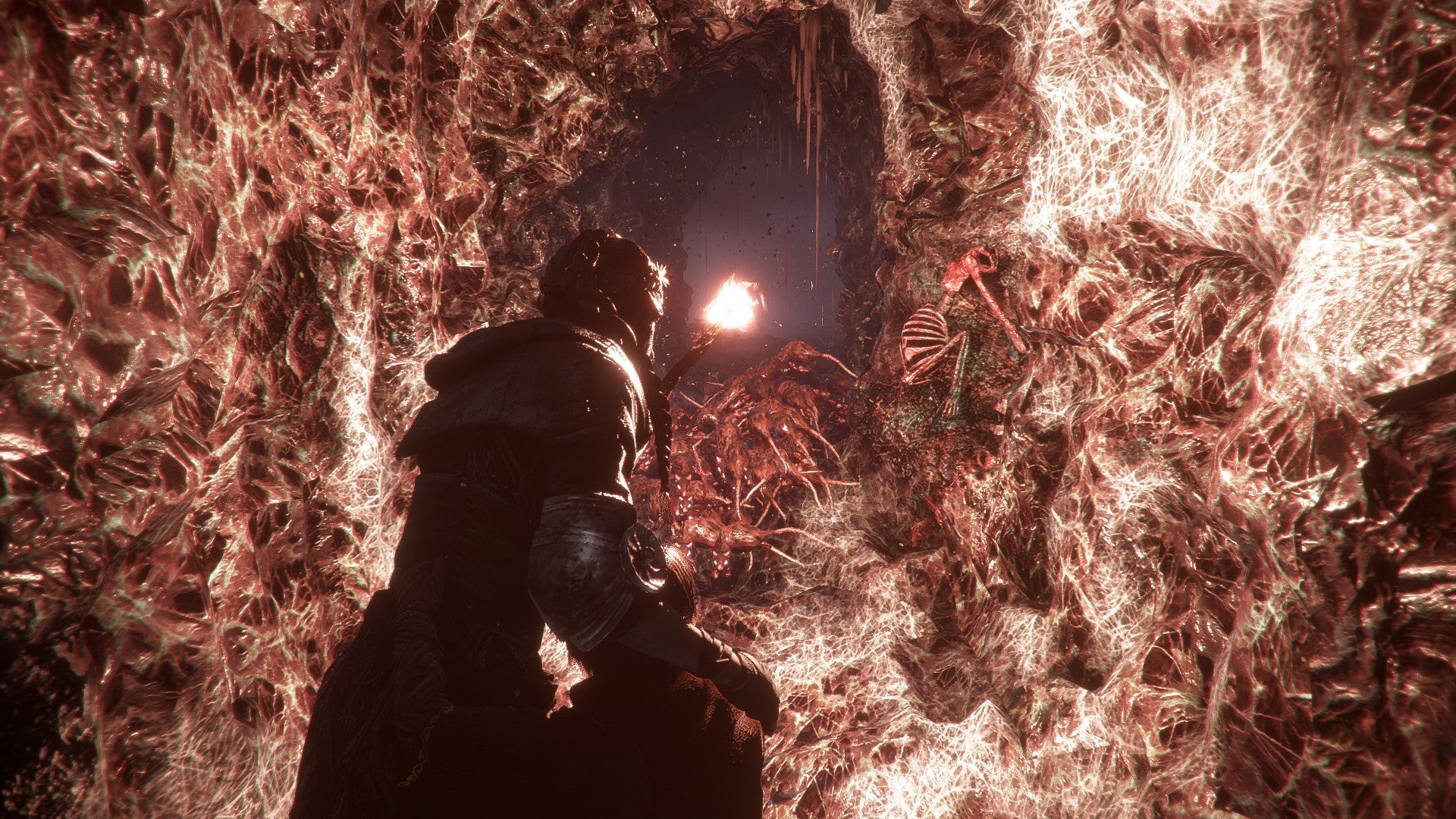 In reality I find rats to be somewhat adorable, although you won’t be stopping to stroke any of them here. Stumble into a puddle of rodents and you’ll be eaten alive, swallowed up by a diseased black mass in a matter of seconds. You’ll need light to survive, whether it comes in the form of a raging fire or a rare beam of sunlight.

The swarm technology behind A Plague Tale’s diseased rats is seriously impressive, even if they sometimes clip through the environments in vile clumps as you manoeuvre around them. If you aren’t bathing in daylight, chances are you’ll have rats to contend with. Much like with stealth, navigating your way through the game is really simple, with destinations being telegraphed enough that I never struggled to find my way.

However, not everything is handed to you on a silver platter, and that’s where Amicia’s sling comes into play. Acting as her one and only ranged weapon, it’s essentially a slingshot used to hurl rocks and other projectiles. I’ll admit, there’s something morbidly hilarious about slinging pebbles directly into people’s faces, watching them crash to the ground only to be devoured by the rats that surround them.

Amicia starts off weak, and the first moment she’s forced to kill is treated as a major hurdle. She either lets her brother die, or swallows her fear and murders the evil knight before her. It’s a powerful moment in theory, but inconsistent performances plague the entire experience, bringing down a lot of otherwise stellar moments. Given the setting, all characters have accurate accents, but this authenticity gives way to clumsy, distracting delivery. If you fancy, play it in French with subtitles. 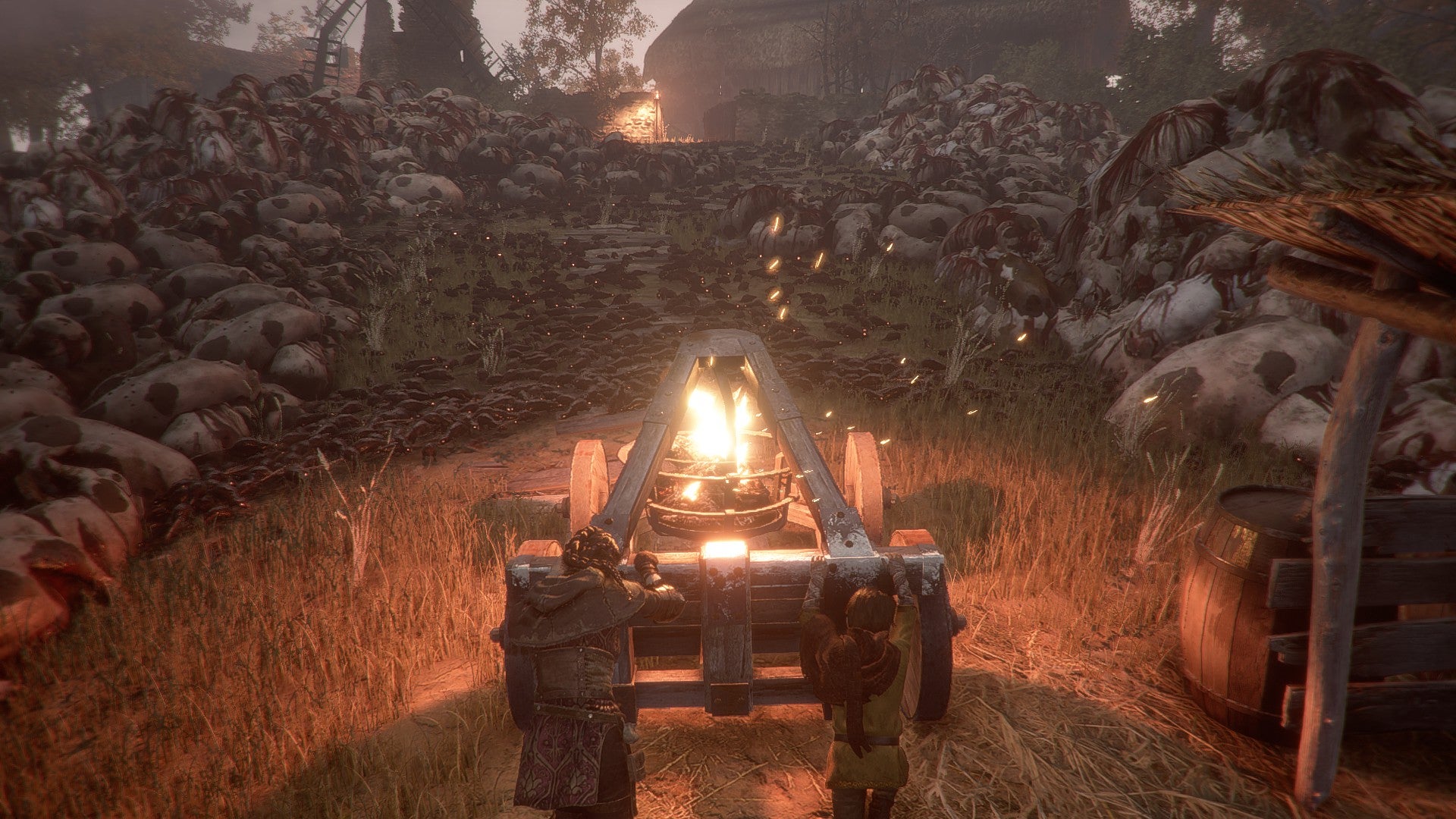 Rats despise the light, so it’s lucky Amicia and Hugo are oftentimes surrounded by it

Amicia’s initial weakness doesn’t last long once you start upgrading your arsenal. Her inventory, sling strength and speed alongside countless other stats can be enhanced by collecting materials on your journey. By the final act you’ll be taking down multiple foes at once with your sling, or using a variety of items to put them to sleep or set them ablaze. I won’t spoil some of the later reveals, but let’s just say Hugo begins to play a far more prominent role.

Outside of stealth and slinging rocks, Amicia has a range of different items at her disposal. Some can reignite dimming fires while others will force armoured soldiers to remove their helmets, leaving them open for a fatal blow. Of course, you’ll need to craft all of these, leading to a compelling layer of resource management.

Do you hoard ingredients for a future upgrade of splurge on crafting in the immediacy of an encounter? This balance works wonderfully, even if I got by without much trouble when deciding to pass on allegedly vital enhancements to my character. It’s a crying shame that A Plague Tale doesn’t give you enough open-ended scenarios to stretch your muscle, though.

A few larger, more comprehensive areas where I could define my approach would’ve been very welcome. Amicia’s cavalcade of powers felt underused as I moved through small, confined environments with only a few enemies doing their usual patrol. Instead, I performed the same old song and dance that guaranteed I reached the objective unscathed. Some items are revealed in the final act, so before you know it, the credits are rolling and you’ve hardly used them. 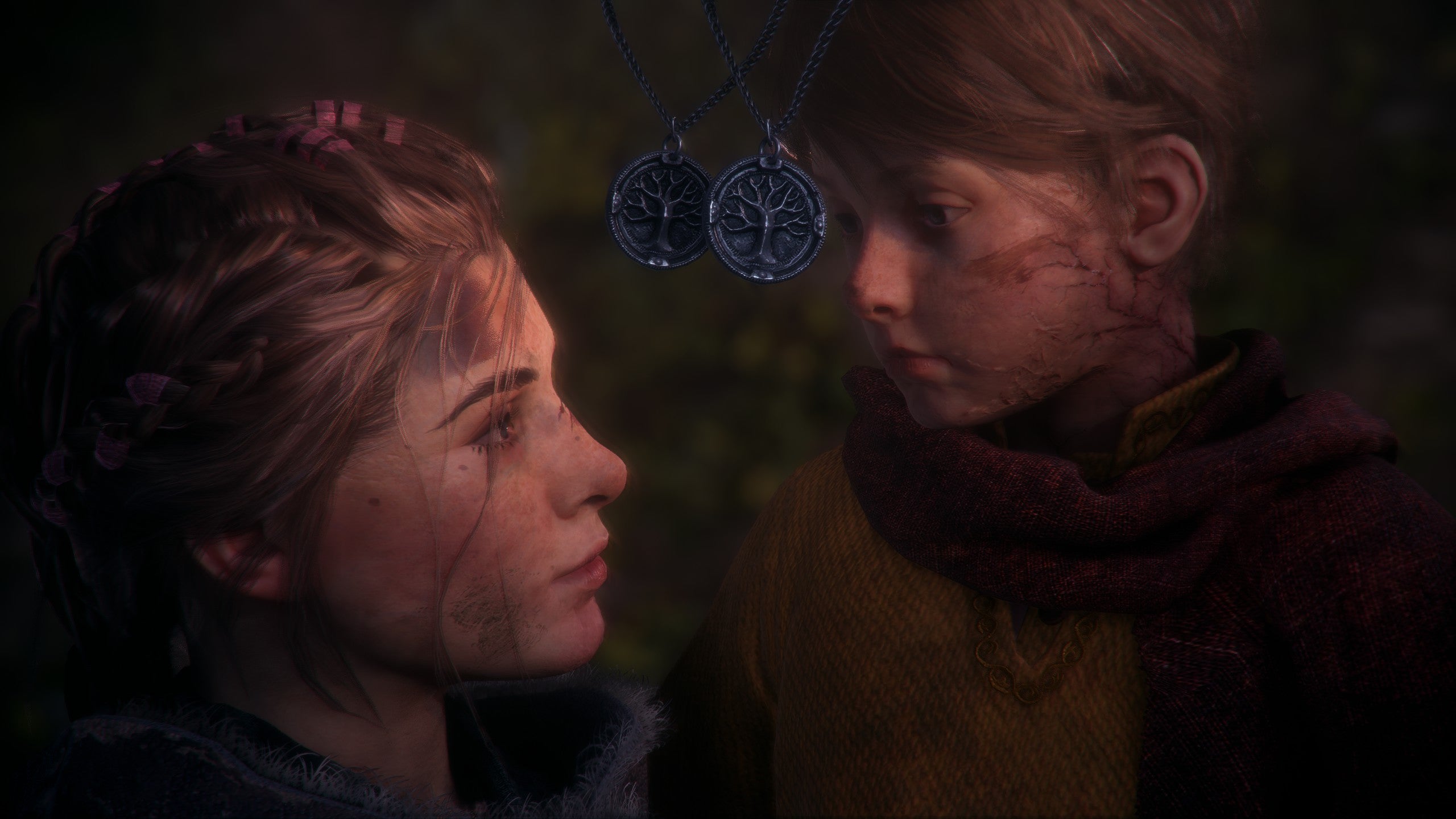 The relationship between Amicia and Hugo is genuinely heartfelt, so it’s a shame things falter by the end

A Plague Tale guides you along its linear narrative at an effective pace until the final third, when things begin to fall apart. The relationship between Amicia and Hugo remains stellar, but supporting characters are handled so awkwardly, hurled into dramatic circumstances that feel sudden and unearned. It sets up conflicts and resolves them with little satisfaction, begging the question, why were they introduced in the first place?

You’re also introduced to a fledgling hub area around the halfway point. It’s pitched as a place to store collectibles from across chapters, acting as a safe haven for you to revisit when the going gets tough. In practice, you’ll see it twice and never have a reason to return. It feels like a misstep, as I would’ve loved to befriend the cast and get to know them through side-quests and dialogue choices that are sadly absent.

For all A Plague Tale does brilliantly with its tone and setting, it’s a huge disappointment to see much of it underbaked to the point of irrelevance. That being said, the period setting is still an achievement in itself. I was suffering alongside the De Rune family, watching as the world fell apart around them, with no way of turning back.

In some ways, A Plague Tale: Innocence is a triumphant narrative adventure bursting with originality, boasting a setting that we really haven’t seen in this space before. However, it’s often held back by failing to capitalise on so much potential.

Greatness is here, but it teeters cautiously on the periphery instead of bursting forth and knocking my socks off. Amicia’s journey and the plight she endures is truly endearing, yet so often held back by mediocre performances and structure that stops the story from shining.

That aside, this is a third-person experience worth embarking on, if only for the distinctive way it subverts mechanics we’ve grown so familiar with. You can also feed evil soldiers to hordes of rats with the press of a button, which is morbidly delightful in its own messed up way.