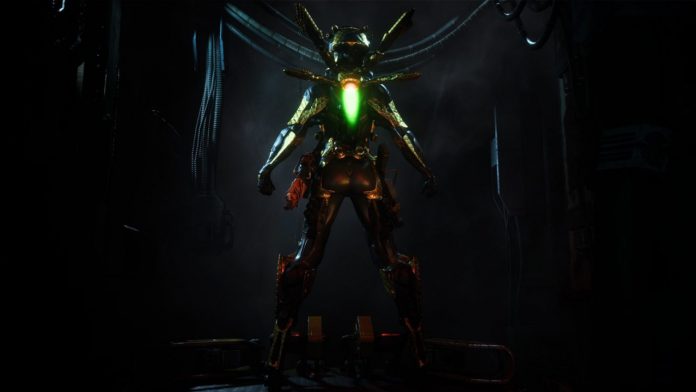 You can make some cool power armor if you put your mind to it.

BioWare nails the feeling of flight in its first attempt at a loot shooter, Anthem. Soaring over a big open landscape in your robot suit (or javelin, as they’re known here); nimbly covering ground in combat situations; snapping into and out of flight mode in a split-second burst of fireworks: it all feels great, and it’s nice that Anthem’s most unique aspect also turns out to be its best. The game also has a robust character customizer, giving you a range of painting tools and letting you swap between materials like cloth, hard rubber, and various metals to create weird and unique looks for your power armor, without locking basic coloration behind a paywall or grind like some other loot games in recent memory.

Those are the good parts. Most of the other elements that make up Anthem, from the storytelling to the loot to the basic gunplay, suffer from a range of problems or just aren’t as good or polished as you’d like, and the game as a whole has an oddly rigid, disjointed structure that often makes playing it feel more tedious and frustrating than it should be. Anthem feels like it needs a lot more attention in a lot of areas.

This is BioWare’s first brand new from-the-ground-up setting in quite some time, but it’s underpinned by the same “ancient, vanished progenitor race and the magical technology they left behind” trope that’s such well worn territory in video game stories, particularly in BioWare’s own Mass Effect series, where it already appeared in two separate iterations. The vast bulk of the dialogue has an overly performative, irreverent tone to it that made it tough for me to get invested in what was going on. Though, there is some dramatic potential in the friction between the various good-guy factions, including the lighthearted mercenary freelancers, who your nameless character belongs to, the stuffy, militaristic sentinels, and Corvus, the secret spy agency. But the story only starts to scratch the surface there (and mostly does so around the edges of the main plot) by the time it’s over, and all of these groups are just up against your standard generic evil empire trying to get its hands on the ancient tech before they do, anyway. Anthem does end with a mildly intriguing post-credits teaser that looks like it will take the game in a distinctly different direction from the story included in the shipping product, and since BioWare is promising “ongoing narrative” content starting a handful of weeks after release, it won’t take long to find out if it’s any good. Hopefully the writers focus more on the grounded, affecting style of storytelling you get just a few short glimpses of at the end of the main campaign.

These guys can be a huuuuuge pain to fight.

Actually playing Anthem is where the real trouble arises. Much of the third-person gunplay feels imprecise, a problem exacerbated by the fact that even combat fundamentals like shooting guns and enemies registering damage seem to be dependent on your server connection, so in laggy situations the game just doesn’t feel good to play. The guns are all generic military fare and don’t have much personality for a game where you’re supposed to get excited about having new weapons drop from enemies all the time, and the aspirational arc of the loot as you level up through the story feels more contrived than in games where the rarity of loot seems truly random (although to be fair, loot issues appear to be something BioWare is committed to addressing quickly). There are four distinct javelins that all play quite differently, though the game doesn’t let you try them out before you’re locked into your initial choices for which ones you want to play first. The ability combo system, similar to that of the Mass Effect games, would ideally add some more variety and dynamism to your combat loadout once you’ve settled on a preferred class, but the game doesn’t even try to explain this system in any detail, leaving you to fumble around and guess at the meaning of various icons and item descriptions if you want to grasp how combos work in any more depth than what’s obvious at first glance. And you’ll realize very quickly there are only a small handful of objectives that you’re going to repeat over and over and over across a multitude of missions. In a game with better combat that wouldn’t be so bad, but with all the other issues in play, it wears thin.

Other oversights or strange design choices drag down the experience. The game is chock-full of load screens, which are interminably long on consoles, and the various sections of the game are so compartmentalized that you frequently hit load after load just to get anything done. New loot that drops during gameplay just comes in as a generic item, so you can’t tell what it is you just got–but that doesn’t really matter since you can’t change your weapons and abilities without returning to the game’s one small town first anyway. So just to try out a new item or experiment with a new set of abilities that might combo well together, you have to load from the game world back into town, walk all the way across town, load into the loot and gear interface, load back into town, then load back into the game world again. It’s hard to say if there are technical reasons behind the simple fact that you can’t even change your weapons on the fly, but that doesn’t make it any less frustrating to play.

There’s a fair amount of grind in Anthem that wouldn’t be quite so bad if there weren’t so many problems in other areas. Gaining crafting recipes for new gear forces you to grind faction reputation, making it feel like it takes forever before you can craft anything worthwhile. The game throws up a couple of arbitrary lists of tedious mechanical challenges that force you to go out and grind a ton of kills, which isn’t all that hard, but also look for more situational things like treasure chests that can be an absolute slog depending on your luck (or your willingness to replay missions that guarantee them). Though there’s an open world, the collectibles and random events you engage with there quickly get repetitive, and some of the events aren’t balanced well for solo play without telegraphing that fact until you’ve already invested too much time in finishing them and run up against a boss with way too much health.

Maybe Spy Lady will have a more interesting story to tell next month.

Also, the game is buggy. Really buggy. Aside from standard server disconnects and crashes, I found basic game functionality would break on a regular basis. Sometimes it was the interact prompt that let me open doors and revive other players that stopped working. Frequently, it was the meter for my ultimate ability appearing to be ready to go even though the ability was actually unusable. Once, the game loaded me into a mission with one of my two guns unequipped (note that the game doesn’t actually let you unequip a gun manually). And twice on PS4, the game crashed so hard that it literally powered down my console, forcing me to repair all my storage devices before I could boot it back up. A game making you worry about damaging your hardware is just inexcusable. I don’t remember seeing this many big and small technical issues in a major release since, well, Mass Effect: Andromeda. How that reflects on BioWare’s recent track record doesn’t really need to be said.

Despite my litany of complaints, I did have some fun zooming around in some of Anthem’s grander combat situations–when everything comes together and you’re flying to and fro, coordinating your tactics with your friends (which, frankly, makes any game better), you can see how good an Anthem with all of these rough edges sanded down could be. And there are a few ideas here, like creating more combat and traversal mechanics around flight, that deserve more attention than they get in the game that’s on shelves right now. But Anthem needs more than just new content. A lot of work needs to be done on a wide variety of the game’s fundamental elements before it can join the ranks of other redeemed loot games like Diablo III, Destiny, and The Division. Whether EA will give BioWare the latitude to overhaul the parts of the game that need it–and whether it’s even technically feasible for them to do that in the first place–are questions with uncertain answers.