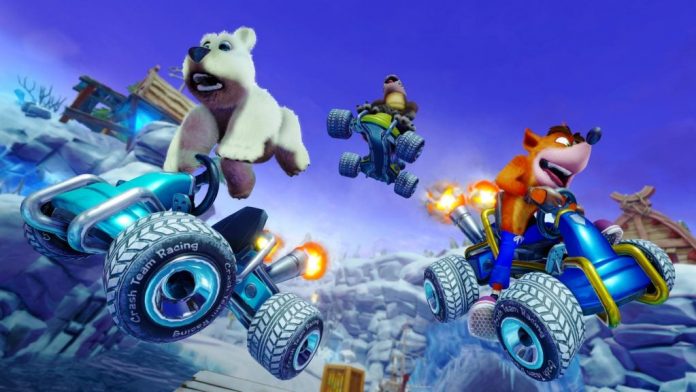 Crash Team Racing: Nitro-Fueled is an excellent remake of a kart-racing classic, potentially introducing the beloved PS1 mascot to an entire new generation of players. However, this might be a little too difficult for younger gamers, so they might want to jump on easy mode.

Mario has long reigned supreme in the kart-racing genre, its mixture of accessible racing and abundant creativity returning each and every generation to blow rivals such as Team Sonic Racing away. Crash Team Racing: Nitro-Fueled arrives as yet another contender for the podium.

Bringing with it a remastered vision of the PS1 classic alongside a welcome handful of new bells and whistles, this new kart racer adopts a similar visual makeover to Crash and Spyro’s recent efforts. Crash Team Racing proves to be both gorgeous and challenging, with the latter arguably being a detriment in the end.

Crash Team Racing is a wonderfully charming racer that’s a blast alone and with friends, although it never quite achieves greatness with a blueprint that sticks a little too closely to the original’s iconic experience. 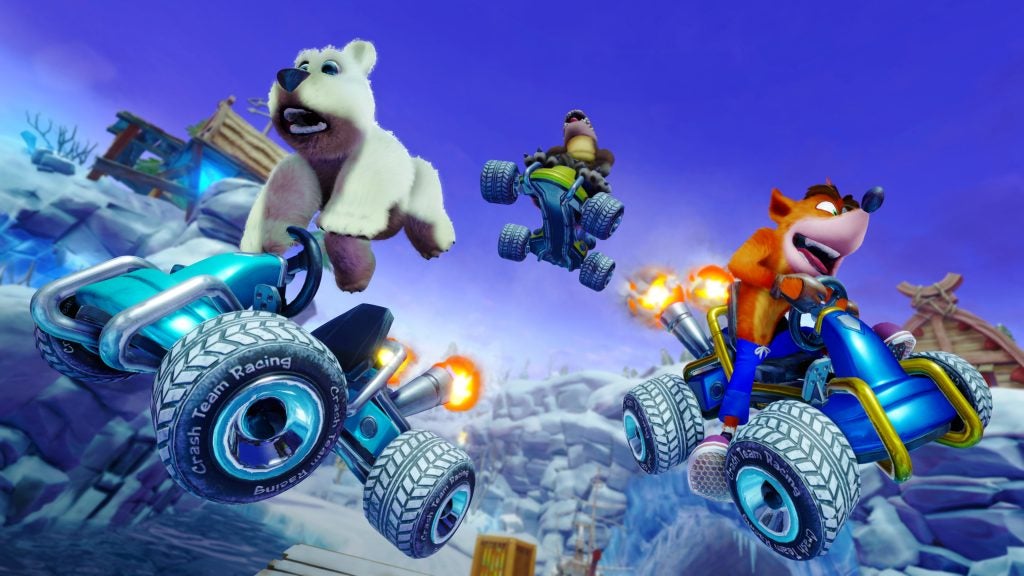 The setup for Crash Team Racing is rather simple. An alien overlord known as Nitros Oxide has chosen Earth as its battleground to prove his kart-racing prowess. If Crash and friends fail to best him, their planet will be the next in a long line to be destroyed by the evil menace. If only all hostile invaders were down for a cheeky race or two before destroying civilization.

After this delightfully simple introduction, you’re asked to pick a character before being thrust into the first of many hub worlds. Portals to individual tracks are spread across the stage, the spaces in-between offering an open space for newcomers to hone their racing chops. Having only grazed the original, it took me a while to feel comfortable with this take on karting.

Drifting, one of the cornerstones of Mario Kart and similar efforts, is transformed into a powerslide with a gauge that, once built up, can be transformed into a temporary boost with a timely button press. Nitro-Fueled is very unforgiving even on the default difficulty. I failed the first race several times before finally discovering a groove that truly worked. After that, I was blazing round corners as Coco Bandicoot like nobody’s business.

Handling feels spectacular, with just enough weight to make turning tight corners and bumping past rivals feel substantial. I must admit your foes are far fiercer than other kart-racing contemporaries, so much so that I found myself struck by several cheap shot projectiles moments before the finishing line on a number of occasions. Eventually, it just felt unfair. 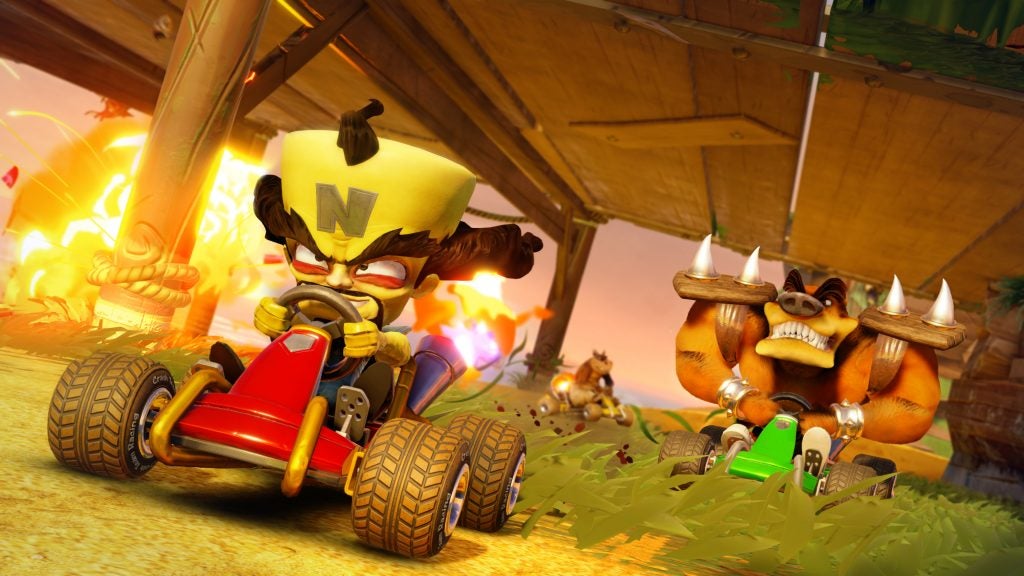 Each world contains four standard races across a variety of tracks, many of which are inspired by Crash Bandicoot’s original trio of adventures. They’ve all been jazzed up for modern platforms and look fantastic, although the colour saturation is too excessive for my taste. Bright shades on nearly everything wash out some detail, making it difficult to appreciate environments that are otherwise immaculately detailed.

Finishing each track is an exciting challenge, learning the perfect route required to dominate AI opponents. Crash Team Racing is very unforgiving, so you’ll need it to reach first-place to progress. Land in silver or bronze position and it’s right back to the starting line. This everything-or-nothing mode of progression won’t be for everyone, especially if you’re coming off the likes of Mario Kart 8 Deluxe or Team Sonic Racing. The old-school challenge remains intact, for better or worse.

Once you’ve boosted through four races, it’s time for a 1-on-1 contest with iconic Crash Bandicoot bosses. While they still consist of three laps, the road is often laden with obstacles, such as a dangerous potions or exploding contraptions. Just like before, the key to emerging victorious here is learning how the boss ticks. Do that, and you’ll be absolutely fine. 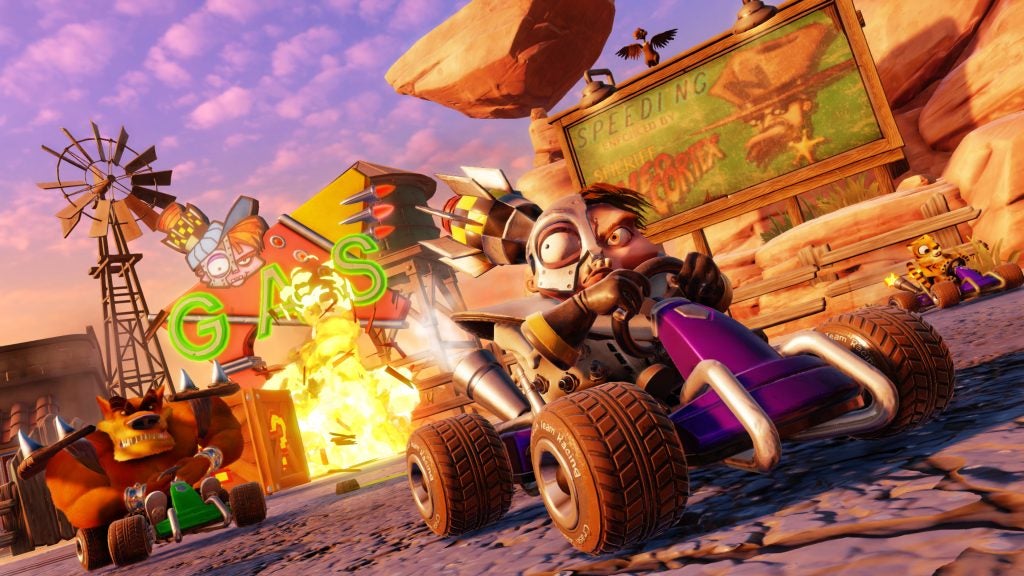 Outside of the main campaign you can return to previously completed races to tackle time trials, smashing through boxes that temporarily freeze the in-game timer. The goal is to destroy as many as possible, culminating in a time that would put other bandicoots to shame.

Another mode has you collecting letters deviously hidden amidst the course. You have three laps to collect three letters, giving you enough time to scout out locations and plan an approach. These are fun, padding out the playtime for those eager to reach 100% completion.

There’s also a robust range of customisation options for each playable character. All of them are awash with outrageous unlockable skins, stickers and kart variants. You’ll need to play as one specific character to pursue their path of unlocks. For example, I remained as Coco Bandicoot throughout the campaign and concluded with most of her goodies unearthed.

I found some spectacular skins, some creative and others which are downright weird. But they all fit the wacky, tongue-in-cheek tone that Crash Team Racing is going for. You can choose to purchase select cosmetic items with real-world money, which has become a normality in a lot of games like this. Thankfully, none of them have an impact on gameplay.

Despite this, having new trinkets added to my inventory after the majority of races kept me motivated to keep playing. Coins are earned after each event which can be used to purchase cosmetics, but it took me forever to compile enough to actually do so.

Crash Team Racing: Nitro-Fueled is an excellent remake of a kart-racing classic, introducing the beloved PS1 mascot to an entire new generation of players. However, this might be a little too difficult for younger gamers, so they’d be better off jumping on easy mode.

Once you’ve mastered how each character moves and responds, the satisfaction that comes from soaring into first place is absolutely breathtaking. Bring a couple of friends along for the ride and you’re really in for a treat.