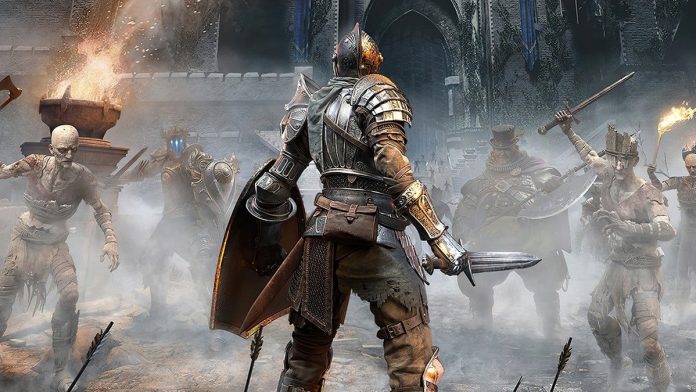 Demon’s Souls is a masterpiece. Bluepoint Games has crafted a beautiful remake that embodies everything that made the original experience so special, maintaining all of its vital elements while building upon everything that matters. This can proudly join Breath of the Wild as one of the best launch games of all time.

The path forward is seemingly insurmountable. Crimson-eyed gargoyles leap off ancient statues and wave their swords towards me, while the bloody swamps below are home to horrific abominations who can only cry out in agony, begging for a wayward adventurer to end their misery. Demon’s Souls is an exercise in morbid attrition, but the rewards that await those who persevere are unparalleled.

First released in 2009, FromSoftware’s action RPG was infinitely ahead of its time, the core mechanics going on to inspire an entire generation of imitators, alongside a slew of classics from the studio that spawned Demon’s Souls. Now, a remake has surfaced courtesy of Bluepoint Games, as a marque launch title for the PS5. It’s a strikingly authentic retread of the beloved classic, and cements it further as a confident masterpiece.

Given the impact it’s had on the medium, it’s fitting that Demon’s Souls would return to usher in a new era of gaming, showcasing a beautiful combination of unforgiving combat and engrossing exploration that morphs every passing second into a curious journey into another world. It’s hauntingly inviting, pulling you further into its masochistic cycle of defeat with each passing battle. Bluepoint Games has outdone itself here, setting a new standard for remakes and much, much more. 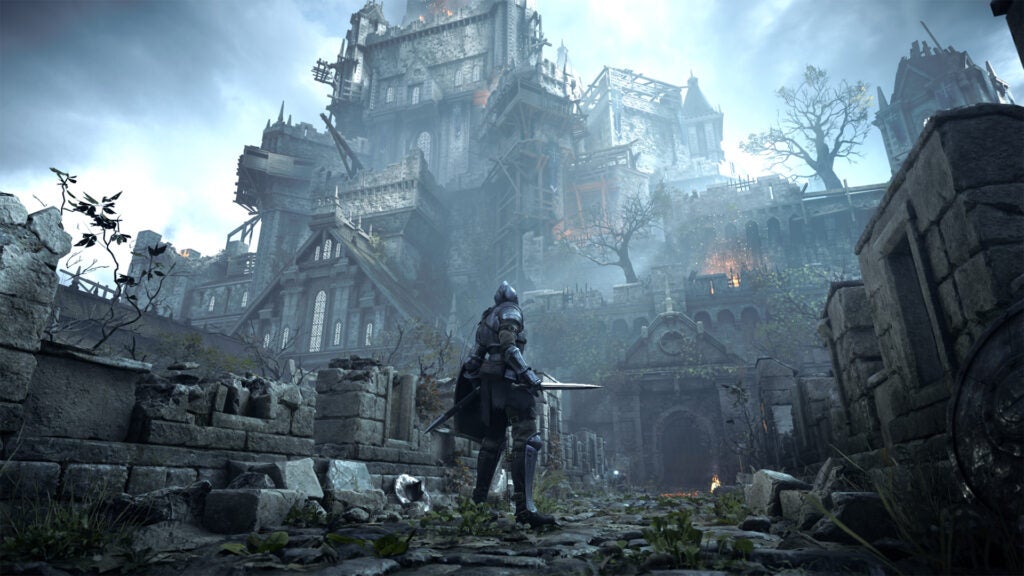 Demon’s Souls follows an untimely soul as they venture through the Kingdom of Boletaria. Plunged into darkness by an ancient demon known as The Old One, this is a world where the embers of hope have long been snuffed out. Darkness and pestilence are bursting from the seams, as deadly monsters prowl every corner, waiting to eliminate those who don’t dare convene to their own twisted ways. You never feel safe, eternally cautious of what awaits around every corner.

Upon making a character, the player is thrust into this world and left to fend for themselves. You’re weak, soulless and initially incapable of survival. This is a game where you will die, and die often – but it’s this constant failure that pushes you onward. Before exploring the variety of realms amidst Boletaria, you’ll find brief comfort in The Nexus. Acting as your hub area, this is a melancholic bastion of solitude, where anxious souls band together to ride out the apocalypse.

The characters all have conflicting ideologies and views of the world, their personal stories intertwining with one another, as they dish out subtle lines of dialogue that tease exactly what brought such an illustrious kingdom to its knees. Nothing is ever stated explicitly, leaving you to linger on the periphery to analyse every minute detail. Stockpile Thomas left his wife and daughter to die at the hands of demons, while The Maiden of Fate sits idly worshipping a god whose own falsehoods are yet to be unveiled.

Such micro-narratives reinforce the overall tone of Demon’s Souls; both that and the atmosphere remain untouched when compared to the original. If anything it feels stronger, a greater level of visual fidelity allowing Boleteria to shine like never before. Despite its grotesque nature, Boleteria is a bleak, beautiful locale brimming with imagination. Hidetaka Miyazaki’s interpretation of fantasy remains unmatched, and his original vision is respected and expanded upon here in myriad ways.

New faces will join The Nexus as you rescue them out in the world. Priests, knights and thieves will linger in the gospel halls, offering their wares to you in exchange for a few souls. Proceed with caution, since allowing the wrong individuals to mingle could result in an untimely demise for some. It feels like these people exist without your presence, dealing with their inner demons as you seek to relinquish Boleteria from its own monstrous clutches. Before you’ve even swung a sword, Demon’s Souls is downright enrapturing.

The Nexus features a selection of Archstones, which teleport you to Demon’s Souls’ variety of levels. Ancient castles, poisonous swamps and claustrophobic mines are just a few of the locations you’ll attempt to conquer throughout the lengthy campaign, all of which present their own demented conveyor belt of challenges. I welcomed this journey, even if my hesitance was obvious through sweaty palms and a racing heartbeat in my chest. 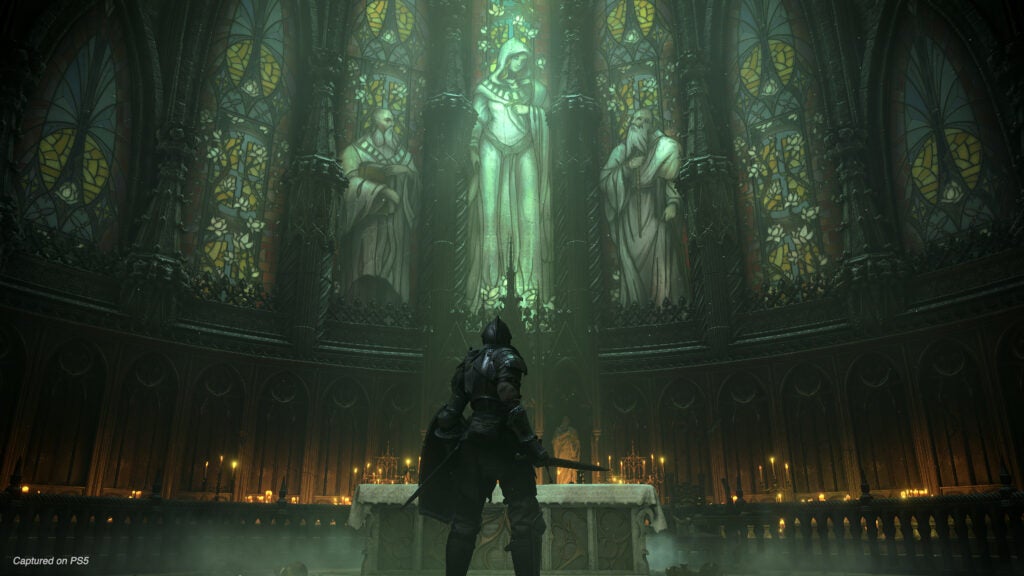 Combat in Demon’s Souls is a matter of deliberacy. It’s challenging, but never unfair. It’s simply strict, expecting you to memorise the movesets of each enemy and take them on one by one. Each encounter is a perilous duel, with even the lowliest dregs of Boletaria capable of striking you down if carelessness happens to surface.

This meant I was always on my guard, shield risen in areas I had conquered again and again in fear that my resolve would slip. Growing from a terrifying newcomer to a bold warrior upon mastering a stage brings with it an unparalleled sense of satisfaction. You feel genuinely triumphant, like you’ve ascended a mountain and claimed the peak as your own.

However, each such achievement comes with the realisation that a higher summit awaits, watching over you with a hostile, unwavering gaze. So, I returned to spend my souls at The Nexus and prepared for yet another ruthless breach into the unknown. Much like Dark Souls, each fallen foe rewards you with souls that can be used to level up, purchase items and upgrade equipment.

Fall in battle and you’ll drop your souls. Fail to receive them and die again, and they’re gone forever. This balance of risk and reward has been translated into countless games since the debut of Demon’s Souls, but nobody does it quite like the original. Here, it’s a wondrous mechanic that reinforces the need to explore and push beyond your own boundaries. 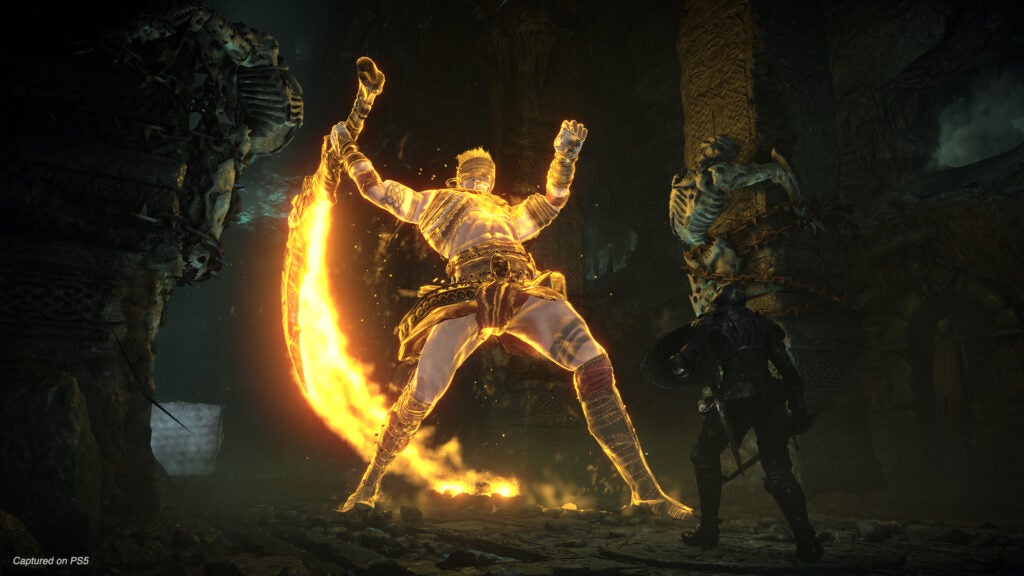 I lost 25,000 souls in the Swamp of Sorrows and felt they were lost forever – but perseverance allowed me to march forward and claim them once again. The elated feeling that accompanied such a feat was immeasurable, even if it was little more than a small piece of the wider puzzles I had spent dozens of hours solving.

Demon’s Souls is filled with such moments, instances where your own personal story of triumph and loss is formed before your very eyes. The freedom given to your character and the range of disciplines you can adopt simply by speccing in a certain way only adds to this idea of building your own legacy. You’ll select a starting class in the opening moments, but this is merely a vague blueprint.

I began as a knight, but by the end I was a light-footed rogue with a selection of shortswords and spells at my disposal. I could hold my own in battle against daunting adversaries, but I could also roll away in defeat if things proved too overwhelming. Even though its fights are brutal gauntlets of aggression, the ability to adapt to each new situation means you never feel hopeless, even if the world around you is drenched in sorrowful apathy. 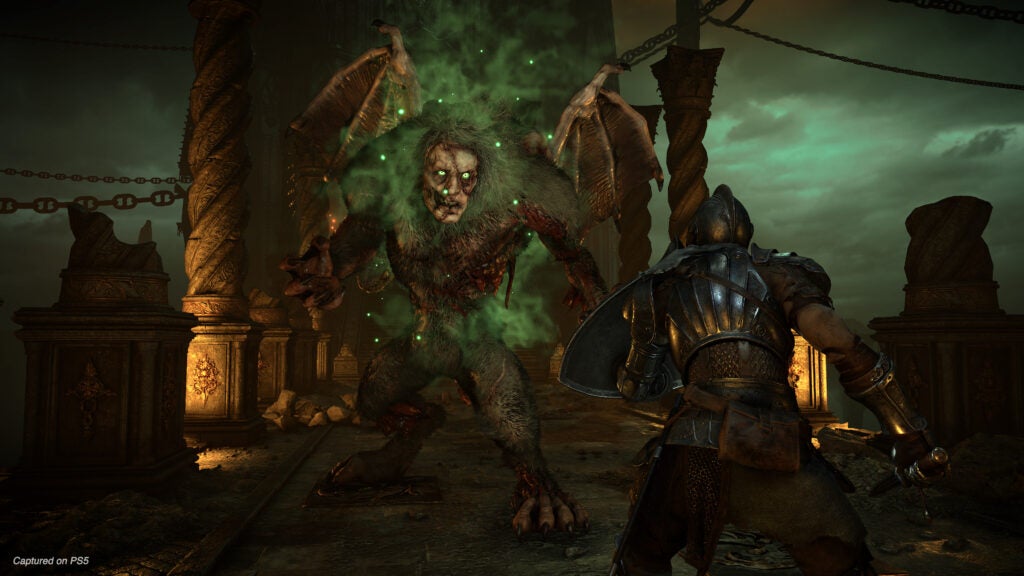 Bluepoint Games has crafted a visual treat in Demon’s Souls. It’s one of the finest-looking games I’ve ever seen, with each creature, surface and character awash with untold detail. You can feel the anguished emotion of the faces of friends in The Nexus as they reveal their tales of plight, or the sneers of contempt from shopkeepers as you walk away without buying a thing.

You can enjoy Demon’s Souls in modes that prioritise either graphical fidelity or performance. The former is stunning and runs at a decent frame rate, but I spent 99% of my time with the performance mode purely because it felt so much smoother to play. Combat encounters require razor-sharp reflexes, and it’s far harder to perform parries with fewer frames on-screen. It’s a small sacrifice to make – because Boleteria is enchanting, regardless of which you opt for.

Those hoping for the RPG to make creative use of the DualSense might feel somewhat disappointed, as the act of swinging axes and deflecting blows with your shield is seldom reflected in the haptic feedback or adaptive triggers. Contextual moments such as the soaring of dragons overhead or the pouring of lava into an abandoned mineshaft are conveyed with more than enough impact, but it isn’t the show-stealer I expected going in. 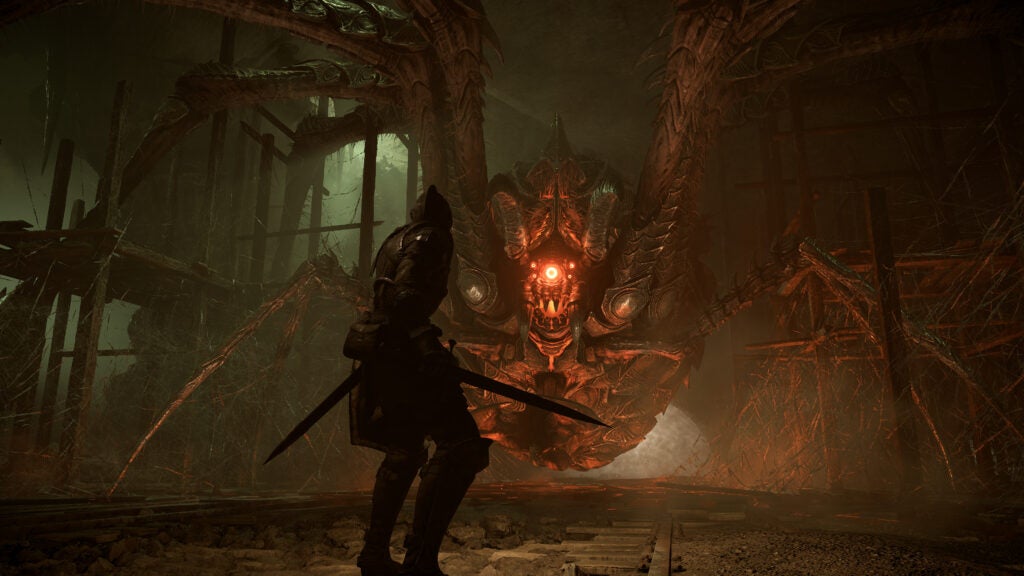 Demon’s Souls is a triumphant remake from Bluepoint Games, introducing the original masterpiece to a whole new generation of players with astonishing results. It’s an unparalleled showcase for the PS5, and easily one of the finest launch games the medium has ever seen.

This uncompromising pilgrimage into the Kingdom of Boletaria won’t be for everyone. It’s incredibly harsh, unforgiving at every turn as you stumble into otherworldly monstrosities who want nothing more than to witness your demise.

But such barriers are worth overcoming, since beyond them is one of the finest RPGs I’ve played in years – and one you need to experience. It more than lives up to the lofty legacy of its progenitor, proudly taking its place alongside the likes of Dark Souls and Bloodborne as one of the genre’s all-time greats.