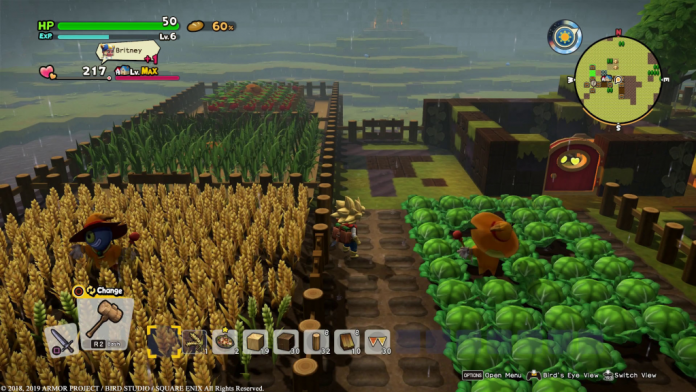 Dragon Quest Builders 2 is a lovely little game, building upon the vanilla experience with a plethora of worthwhile improvements. It all feels better, emboldened with an intuitive edge that overcomes cumbersome issues that brought the original down at times.

There’s so much to do, whether you’re tackling the lengthy solo campaign or playing alongside friends to stake your claim in this fantasy world. It’s also a worthwhile love letter to the long-running series, filled with adorable references and easter eggs hardcore fans will adore.

At first glance, you’d be forgiven if you labelled Dragon Quest Builders 2 as a rather shameless Minecraft clone. Its world consists of endless cubes making up sprawling deserts and dense forests, filled with iconic monsters from decades past that the series has come to call its own. Fans of the franchise will feel right at home here.

The idea of building your own place of belonging is eerily similar to Mojang’s effort, but the JRPG flavouring that surrounds it is what sets Dragon Quest Builders 2 apart in so many brilliant ways. Outside of constructing buildings, farmlands and bathhouses you’ll embark on an epic world-spanning journey, making plenty of friends along the way while completing quests and other missions.

It’s carried by a sharp variety of dialogue and oodles of tutorials, some of which drag on a little too long if I’m honest. It can take a while before you’re unleashed into the thick of things. That aside, Square Enix has crafted yet another fun, accessible journey of creativity I was more than happy to embark upon. 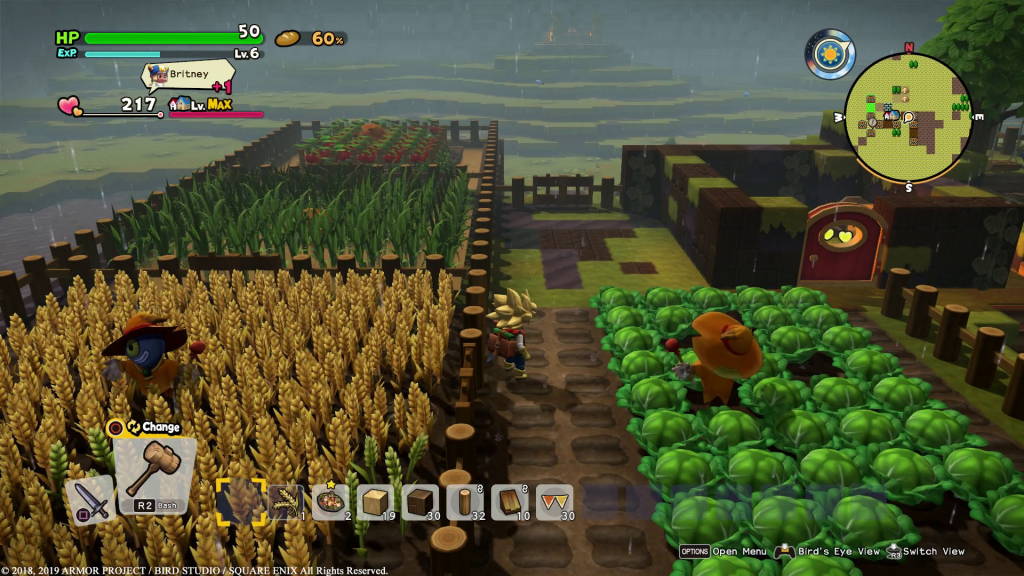 One of your first major tasks will be planting dozens of essential crops. Cherries, anyone?

My adventure in Dragon Quest Builders 2 begins as a prisoner aboard a ghostly pirate ship. A crew of skeletons, bats and other nasty creatures have taken me into captivity, fearing the one thing I was born to do – build. The art of building is forbidden in this world, with its inhabitants content with living in misery as their crops wilt and farm animals fail to produce anything.

It’s a fairly miserable existence when all is said and done, so when I waltz out of my cell to confront my evil captors, they’re less than pleased with my identity. Fortunately, they soon need my assistance as water begins flooding inside the ship, as a looming storm threatens to sink us all. But that’s nothing that a few well placed blocks couldn’t fix – so after a bit of work, the day is saved.

Well, almost. The ship inevitably succumbs to oblivion as the wreckage and its unfortunate inhabitants wash up on the shore of a nearby island. As I arrive at the beach it’s riddled with remnants of the vessel and, surprisingly, a bunch of corpses. It’s laughably grim given how lighthearted everything else appears to be, giving Dragon Quest Builders 2 an edge amidst all the jolliness.

I’m alone on the shores of death as I meet a fellow survivor. This warrior is fun, friendly and ready to fight, acting as one of the first permanent party members you’ll come across on this adventure. After meeting with the locals and learning how to build the basics, it’s time to venture to one of multiple land masses I came to call my own over the next several hours. 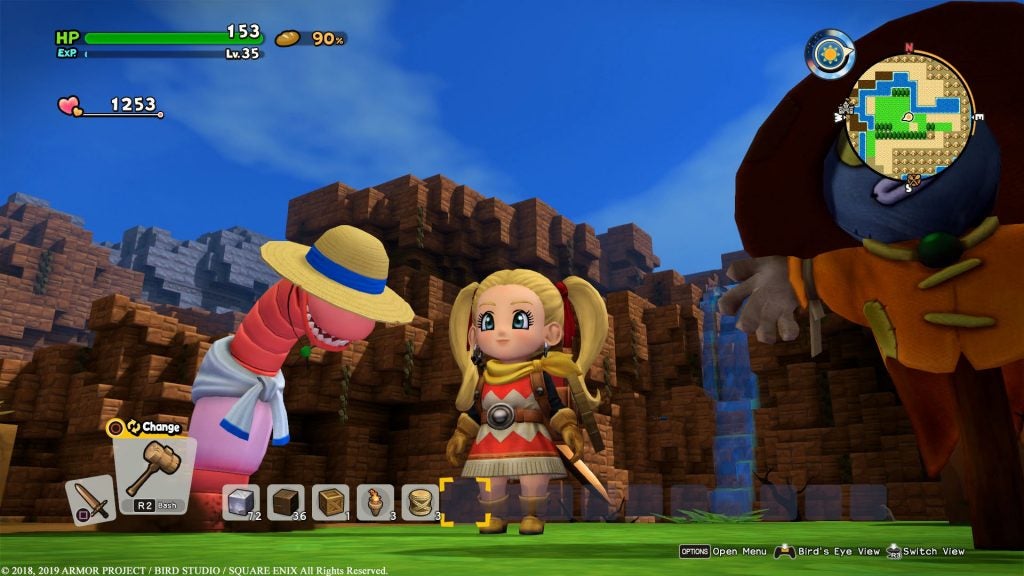 This snazzy looking worm fellow is repsonsible for making soil fit for use, and boy does he look dashing

My humble abode is Furrowfield Farms, which begins as nothing more than a mixture of rotten soil and broken buildings. Perhaps most depressingly, a few hopeful souls still call this place home. So, it’s time to bring this adorable town back to life. But, like everything else worth having, it’s going to take a bit of work.

This is where Dragon Quest Builders 2 really comes alive, handing you free reign to build whatever you like while abiding by a rather linear mission structure. Story progression has you completing objectives that involve building the settlement’s agriculture or simply creating a place that people are content living in.

Some occupants might require specific housing filled with trinkets that fit their progression. A farmer may love a small apartment complete with a straw bed and sets of tools, while a soldier might prefer a bathhouse to relax in after a hard day’s work. Every mission is an exercise in creativity, teaching me something specific while simultaneously building my overall knowledge of this world.

You’ll level up towns as you progress, collecting hearts from townspeople before ringing a bell in the city centre. Doing so unlocks all forms of new items to create and increases the efficiency of workers. No longer did I need to plant seeds or water crops, leaving behind busywork as I focused on more ambitious endeavours. It’s all really good fun, although the slow pace of progression might turn some players off.

Dialogue is plentiful, and the majority of quests are filled with character and story development as you befriend new individuals and follow the overall narrative. Events themselves aren’t too important, providing a fun context for all my shenanigans with an utterly splendid localisation. Depending on where you meet them, people have distinct dialects. I couldn’t help but lose my mind when a cutesy warrior starting shouting out the likes of ‘fam’ and ‘cray cray.’ 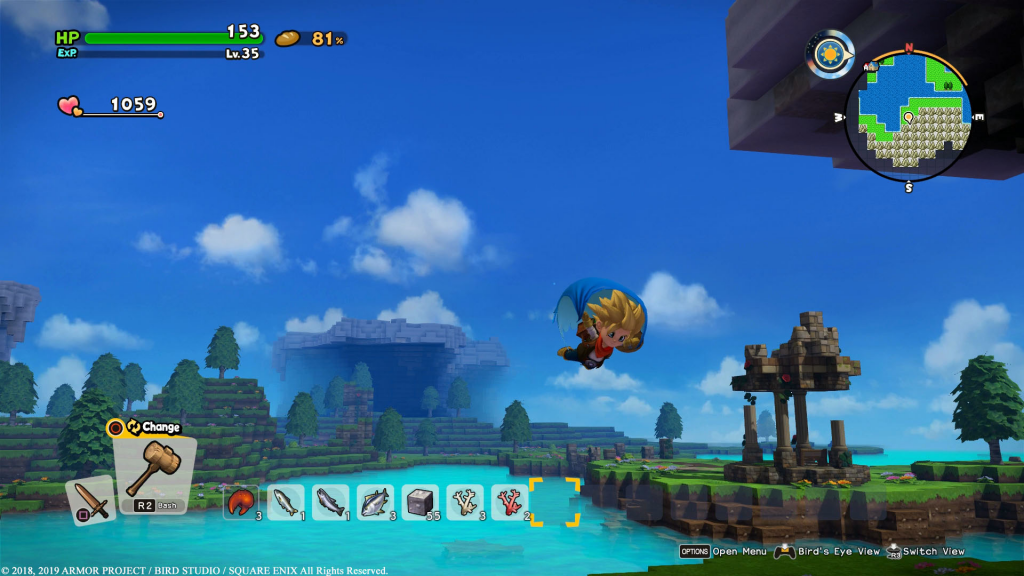 Later into the game you can yeet yourself into the air with ease, making navigating the environment a breeze

The potential of Dragon Quest Builders 2 only grew further as I progressed through the campaign, filling my mind with ideas and really making each new environment I unleashed myself upon a display of ludicrous experimentation. I had so many tools to play around with, many of which took some getting used to. But practice makes perfect, and learning what makes this game tick is part of the fun.

The simplicity of combat is a small flaw, tied to one button and a small array of unlockable attacks. Unless I was after specific resources or fighting optional bosses, I’d often avoid confrontation or leave it to my fellow party members. However, it’s impossible to avoid spontaneous attacks on villages, where monsters will seek to destroy crops I’m trying desperately to grow. Most of the time, they’re dispatched within a matter of seconds.

A variety of craftable weapons and other goodies also spice things up nicely alongside a number of features not found in the original, Many hours into the game, players can discover the ability to fly and travel underwater, adding a valuable additional dimension to the world not seen before. It’s a newfound sense of freedom that gives this world, despite being made of blocks, a rather comprehensive scale. You can play cooperatively with four friends in multiplayer too, if you’re keen to tackle projects together. 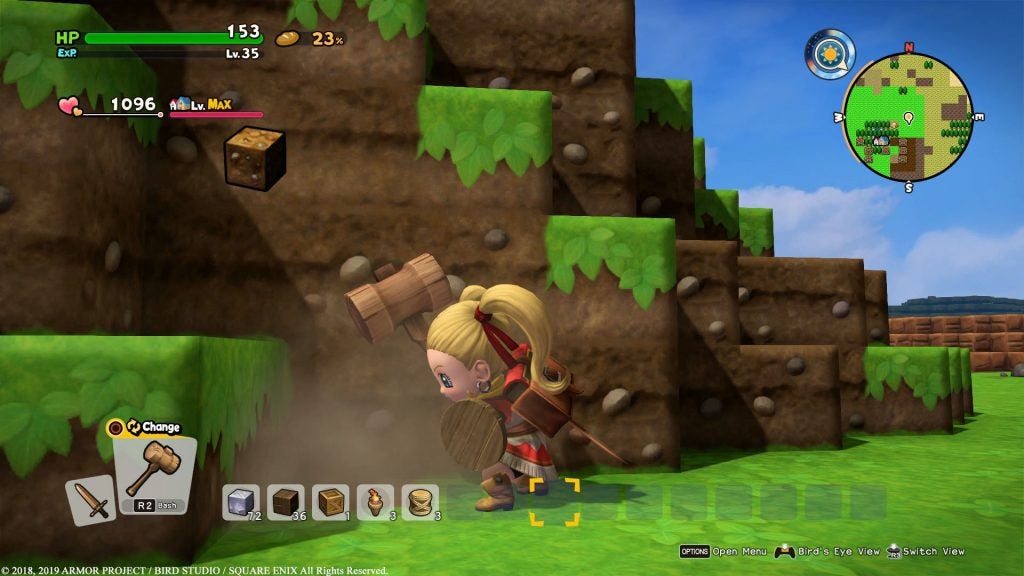 Despite being filled with blocks, this is far more than a Minecraft imitator

Exploring the world either alone or with some fellow builders is a blast, providing enough surprises that I was creating my own stories when encountering ruins of a world that was something more in the past. People touched this island long before I did, leaving behind spoils for me to discover in the form of treasures, secrets and even a few dastardly foes to deal with. Once you gain additional means of movement, traversal only grows more enjoyable.

Dragon Quest Builders 2 is a lovely little game, building upon the vanilla experience with a plethora of worthwhile improvements. It all feels better, emboldened with an intuitive edge that overcomes cumbersome issues that brought the original down at times.

There’s so much to do, whether you’re tackling the lengthy solo campaign or playing alongside friends to stake your claim in this fantasy world. It’s also a worthwhile love letter to the long-running series, filled with adorable references and easter eggs hardcore fans will adore.

You can also recruit a dog to join your party and pet them whenever you like, and if that doesn’t sell it to you I’m not sure what will.