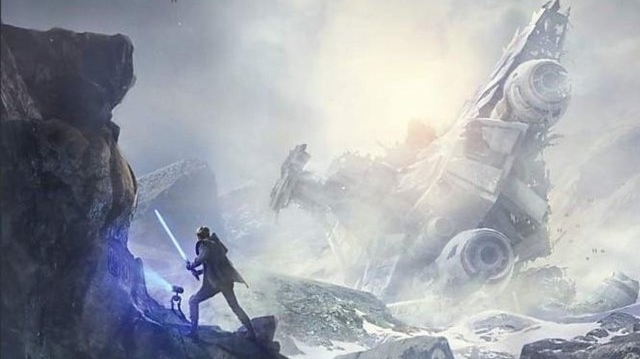 Video game leaks often come from fairly unexpected places, and this time we have one courtesy of an Amazon T-shirt listing. I imagine someone’s getting a dressing down for this.

Thanks to the ever eagle-eyed Wario64, who spotted the accidental image, we now have our first non-teaser look at Respawn’s Star Wars title. Judging by the rocks and moss, I’m getting some serious Ahch-To vibes from the concept art. (Aside from sounding like a sneeze, Ahch-To is the name of the planet seen in The Last Jedi where Luke Skywalker goes to retire after his Jedi school gets burned down. It’s also the birthplace of the Jedi Order, FYI).

Another important feature of note is the little droid companion next to the Jedi. It seems to be scanning something on a rock wall – ancient Jedi texts, perhaps? It would certainly fit the Ahch-To theory.

During the initial E3 announcement for Jedi: Fallen Order, Respawn CEO Vince Zampella confirmed the game would be set in the Dark Times period, at the end of the Clone Wars when the last of the Jedi were being hunted down. This explains why we see so many TIE fighters looming overhead and buzzing around the downed Republic ship – it looks like this Padawan was one of the lucky few to escape Anakin’s… er, visit to the Jedi Temple. A teaser image shared earlier this week was accompanied by the words “don’t stand out”, further illustrating the theme of avoiding the Empire. Perhaps stealthy gameplay will be order of the day.

Not a lot else is known about the upcoming title, aside from the fact Chris Avellone worked on some of the writing, it’s releasing at the end of this year, and will feature single-player, third-person gameplay. Thankfully, new details are set to be revealed at the Star Wars Celebration event in Chicago tomorrow (which you can watch via livestream at 7:30pm GMT). Oh – and in other Star Wars news, the Episode 9 title and trailer will likely be announced during a panel today, so it’s shaping up to be a big weekend.