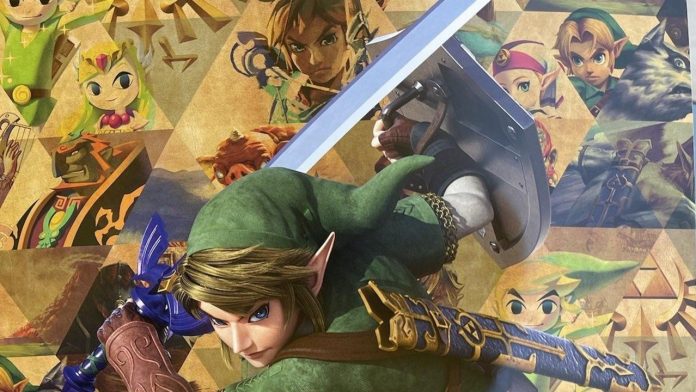 The Legend of Zelda turns 35 this year, so where are all Zelda-related announcements from Nintendo? Right now, there’s the Age of Calamity DLC Season Pass and Skyward Sword HD to look forward to, but beyond this not much else.

Industry Insider and VentureBeat journalist Jeff Grubb previously explained how Nintendo wanted Skyward Sword HD to be the sole focus in the lead-up to its release and would then reveal more later on in the year, which connects back to a rumour about the return of Wind Waker and Twilight Princess. VGC’s Andy Robinson also previously said these older 3D entries are “100% coming this year”.

With all of this in mind, there’s now a Zelda poster that is apparently being handed out in GameStops across the US. The promotion is due to start next week, but according to insider NateDrake, it’ll begin on Sunday this week (and you might have to spend a certain amount on certain products to get it). Here’s how ResetEra user Rareware was able to get their hands on it early:

“So I just went to GameStop to pick up Ratchet & Clank and asked the manager while I was there if they “started the Zelda promotion yet where you get a free Zelda poster when purchase Zelda merchandise”. He says it “probably won’t start until sometime next week”. But then he reaches into drawer and gives me the Zelda poster anyway along with my Ratchet game!”

apparently a Zelda poster will be given out at GameStop sometime next week for some kind of promo https://t.co/jNTwC5VZTY pic.twitter.com/fAiRvitxK8— Wario64 (@Wario64) June 11, 2021

As can be seen above, it’s double-sided and features all sorts artwork from different Zelda games. Notably, Windwaker and Twilight Princess are both featured.

It’s of course raised speculation about the classic Zelda games on these posters returning. In saying this, it appears at least one side of the graphic has been recycled from the 30th-anniversary celebrations of Zelda, as highlighted by ResetEra user GJ. Others have also noted similarities to the banner featured on the official Zelda website.

Please note, we’re not suggesting anything here ourselves – at the very least, consider this a heads up that GameStop might be handing out free Zelda posters over the coming weeks. What we will say is that it’s interesting timing and nice to know Nintendo hasn’t completely forgotten about Link’s big year.