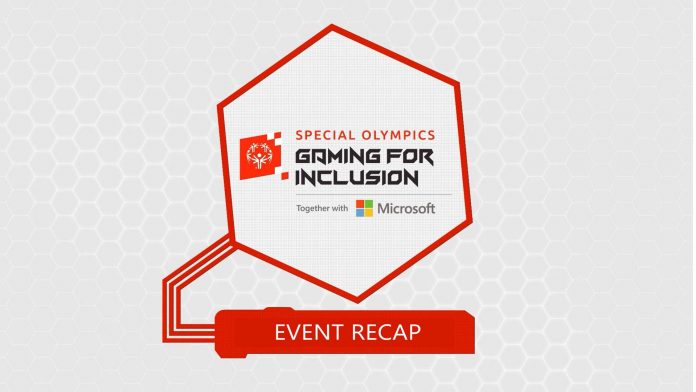 Last weekend, the inaugural Gaming for Inclusion esports experience came to an exciting end. A partnership between Special Olympics and Microsoft, the purpose of this virtual, multi-day esports tournament was to showcase the power of inclusion through gaming and to connect people of all abilities from around the United States. The event brought together more than 90 Special Olympics athletes from 16 states for an action-packed week of esports competition in Forza Motorsport 7, Madden NFL 22, and Rocket League.

“Gaming for Inclusion was an incredible success this past weekend. We are so proud of our Special Olympics athletes who trained hard for this moment to compete and play alongside our celebrity ambassadors,” said Prianka Nandy, Chief Information and Technology Officer at Special Olympics. “We were impressed with everyone’s passion and commitment to good sportsmanship within the virtual competitive gaming space.”

Over the course of the weekend, more than 550,000 viewers watched the competitors battle it out. In the Rocket League tournament, Jackie Nash, Isaac Myers, Billy Seide, and Evan Pikscher were crowned champions of the arena, while Chris Santacroce and Colton Rice burned up the track to take home the gold in Forza Motorsport 7. Finally, the Madden NFL 22 trophy was lifted by Tommy Crocco after leaving it all on the field to get the win.

Of course, there was much more at play here than just wins and losses. Creating an environment in which Special Olympics athletes and their Unified partners – athletes without intellectual disabilities – could have fun through friendly competition was of paramount importance.  This event was the perfect opportunity to bring people together through the power of gaming and forge friendships that would last longer than just a weekend.

“It’s clear that gaming and esports are a valuable way to connect with others, compete, and have fun. Many athletes will leave the tournament with new friendships, and we hope to bring this experience to more people in the future,” said Jenn Panattoni, Head of Xbox Social Impact. “We believe that gaming is for everyone, and the Gaming for Inclusion tournament is a step forward in making esports more accessible and welcoming of all players.”

One example of the unifying power of esports is the friendship between 16-year-old Stephanie Lopez from Chicago Ridge, Illinois and Reese Smith, 17, from Bartonville, Illinois. Stephanie was one of the first of four athletes to participate in esports competitions in Illinois, while Reese has been participating as a Unified partner in Special Olympics Illinois’ esports program for over a year and was one of the first ever Unified partners to compete in an in-person Special Olympics Illinois esports tournament.

Stephanie and Reese are both passionate about Special Olympics’ esports program, where they get to share their love of gaming and build connections with people of all abilities in a virtual setting. “It gives me something to look forward to every day after school, like being able to join our Discord server and have a lot of people to challenge in fun games,” said Stephanie. “It fills my day with fun!”

Stephanie’s experience as a Special Olympics esports trailblazer has also helped her grow to be a leader at her school and in her community, serving on the Youth Activation Committee for Special Olympics Unified Champion Schools.

Meanwhile, Reese is so committed to Special Olympics esports that the only night he requests off work is Wednesday night so that he can take part in Special Olympics Illinois’ gaming night. He feels like competitive gaming is getting more accessible and has high hopes for the future of accessible gaming. “I think different websites are starting to make it easier to get registered to play,” said Reese. “I hope that one day it will be easy enough where everyone will be able to play.”

In the Gaming for Inclusion Rocket League tournament last weekend, Stephanie was paired up with Patrick McDonald, a Senior Program Manager at Microsoft. Patrick and Stephanie had the opportunity to get to know each other outside of the tournament, as Patrick and his wife extended an invitation to Stephanie and her family to join them for a pro wrestling event so that they could connect and have fun together ahead of the tournament. Special Olympics and Microsoft hope to bring people of all abilities together through gaming, and Stephanie and Patrick’s story is showing us how people of all abilities are already gaining so much from the connections they build through esports.

Most of all, Patrick was impressed by the hard work and dedication that Stephanie put forth to get herself in a position to win. “Stephanie is definitely a firecracker,” he said. “She lives to compete and puts in the training and practice to become better. During our time playing Stephanie moved up a couple of ranks in competitive and the work that she put in to get there shows.”

Events like Gaming for Inclusion and competitors like Stephanie prove that everyone has a burning desire to compete and have fun. Gaming is for everyone, and Microsoft is committed to creating accessible gaming experiences to empower people of all abilities to compete. “We’re thrilled with the results of the inaugural Gaming for Inclusion tournament. The competition was fierce, but so was the teamwork between Special Olympic athletes and their Unified partners,” said Panattoni. “When we partnered with Special Olympics, our goals for the tournament were to showcase the power of inclusion and provide Special Olympic athletes with a new way to compete.”

The partnership between Microsoft and Special Olympics started in 2014 and the success of the inaugural Gaming for Inclusion event is not only proof that our relationship is stronger than ever, but that there will be a lot more opportunities in the future. “I want to personally extend my gratitude to the Microsoft and Xbox teams and their volunteers who helped make this event possible,” said Nandy. “Through this experience, we were able to engage athletes and help them forge new friendships while also showing the world what people with intellectual disabilities are capable of, on and off the field.”