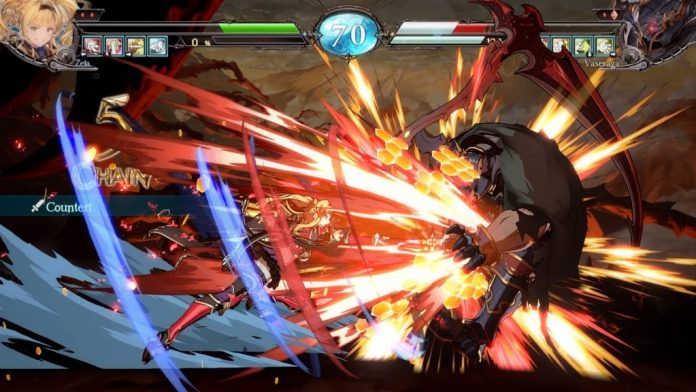 A lengthy story mode, a host of characters to play as, and numerous online modes to fight your way through ensure Granblue Fantasy Versus definitely won’t leave you wanting in terms of content. Learning through playing locally and online is distinctly better than relying on the game’s own resources. But if you’re looking for a casual, relatively simple fighter to play then it definitely fits the bill. Character designs may turn off a few people, but existing Granblue fans will definitely want to see their favourites brought to life through Arc System Works’ fantastic engine.

For many, the name Granblue Fantasy won’t mean much. Overseas, though, the series has gathered an incredible fanbase, stemming from the mobile game that was originally released in 2014 yet never saw the light of day in the UK or US.

Now the series is looking to branch out with various Granblue-related projects in the works. The first spin-off from the original to be released is Granblue Fantasy Versus, a traditional 2D fighter made by pedigreed fighting game experts Arc System Works – the minds behind classics such as Guilty Gear, Dragonball FighterZ and BlazBlue. It’s goes without saying, this studio knows exactly what it’s doing.

Not wanting to stray too far from its origins, in addition to the traditional Arcade, Versus and Online modes, Granblue Fantasy Versus also has a fully featured RPG campaign. You take control of central character Gran, as he makes his way through the story of the original game. With a mission-based structure, these “RPG levels” have you making your way through hordes of nameless foes, as they face the mighty wrath of Gran’s extremely overpowered boot.

Outside of missions, you’re able to craft and equip different weapons and unlock recoloured costumes to customise your experience as you see fit. While this is a very nice distraction from getting beaten senseless online, it does feel like a slight bolt-on. There’s simply not much substance to it.

Missions can get pretty tricky, introducing interesting mechanics to ensure you don’t get bored as you make your way through the campaign’s myriad encounters. Enemies will occasionally require you to combo them to be beaten, and navigating your way through the decidedly small stages can present much senseless fun – but it all feels just a little bit hollow.

This is down to the fact that it can feel pretty stripped-down at times, making the “RPG mode” moniker a little bit misleading. With Granblue Fantasy Versus’ eye-catching graphics, the RPG mode sails on its in-engine cutscenes for key moments. Most of the time, however, you’ll be seeing static characters and text-boxes pop up as if it were more a visual novel than a fully fledged RPG – which is disappointing, to say the least.

Aside from RPG mode, Granblue Fantasy Versus also has an Arcade mode, where you face-off against the cast of characters as well as taking part in a special boss battle at the end. This uses Arc System Works’ classic dynamic difficulty, where if you clear a stage and find it too easy or too hard, you’re able to switch up the difficulty after the battle.

You’re also able to face-off against your friends or the computer in the traditional Versus mode, with all of the standard round/timer options and the ability to select the side you want to play on. It’s something nearly every fighting game has, so it’s a welcome addition here.

Training mode is also well-featured, and you’ll be able to drill combos or inputs without problems. One interesting feature of this mode in Granblue Fantasy Versus is that you can also play with an “input delay” timer, if you’re wanting to adjust your play for online latency.

In the traditional 2D battles, Granblue Fantasy Versus does pick up the slack where it matters. With 11 characters to play as, the game leaves nothing to the imagination – they can vary wildly in style. Ladiva is a hulking grappler, similar to Zangief in Street Fighter, for example; others, such as Lowain, bring their own unique take to the fight.

There’s something here for everyone, with almost all of the traditional fighting game archetypes covered. While this is fine and dandy, we’d love to see Arc System Works try something different when it comes to the DLC characters, as the game can come across as pretty vanilla in comparison to Dragonball FighterZ, for example, which just increased in complexity with a new patch, two years after its original release.

It’s pretty clear that Granblue Fantasy Versus is trying to rope in players who may not have played any fighters before, and this is further exemplified through the use of auto-combos, where you’re just able to mash a button, and your character will do a basic combo. The same goes for cooldown-based special moves, which can be executed through trivial inputs, but that have a longer cooldown and are less potent than if you were to execute them traditionally.

These efforts to appeal to new players are admirable, but if you hop into one of Granblue Fantasy Versus’ well-presented online lobbies – which are fashioned with a chibi character running through a cute airship with little arcade setups – then you’ll quickly be beaten down. These auto-combos and easy inputs will not get you too far when it comes to facing off against other players. 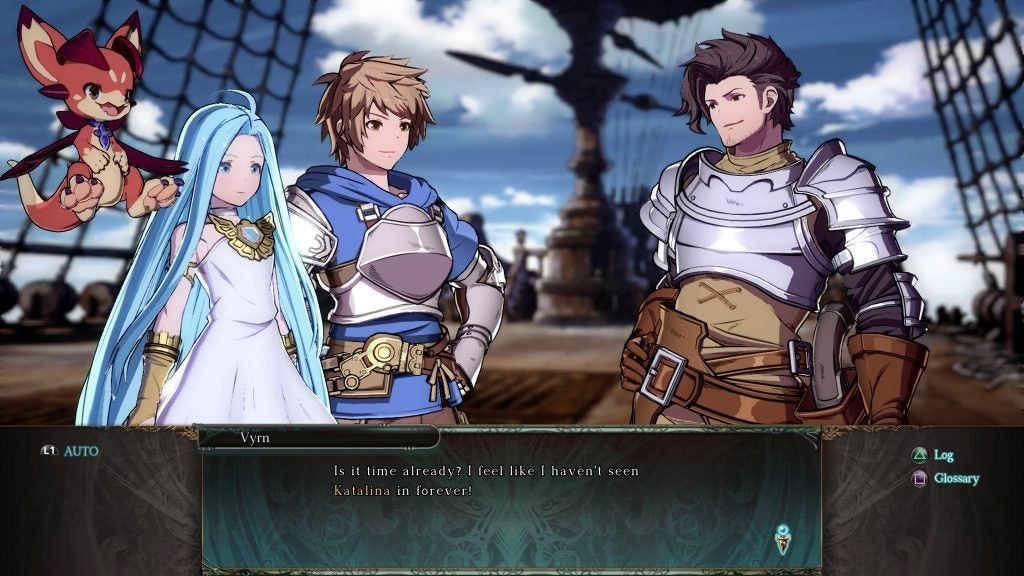 Tutorialisation has always been difficult for fighting games, but titles such as Killer Instinct managed to pull them off well. The end result of things like easier (but nerfed) inputs and auto-combos is that many new players will fall into bad habits. Without the learning tools to support them, they will bounce off of the game if they do not seek external resources in the fighting game community.

Should you buy Granblue Fantasy Versus?

With a lengthy story mode, a host of characters to play as, and online modes to fight your way through, Granblue Fantasy Versus definitely won’t leave you wanting in terms of content. Learning the game through playing people locally and online is distinctly better than relying on the game’s own resources.

But if you’re looking for a casual, relatively simple fighter to play then this game definitely fits the bill. Character designs may turn off a few – they can be pretty gratuitous or eccentric – but existing Granblue-series fans will definitely want to see their favourites brought to life through Arc System Works’ fantastic engine.