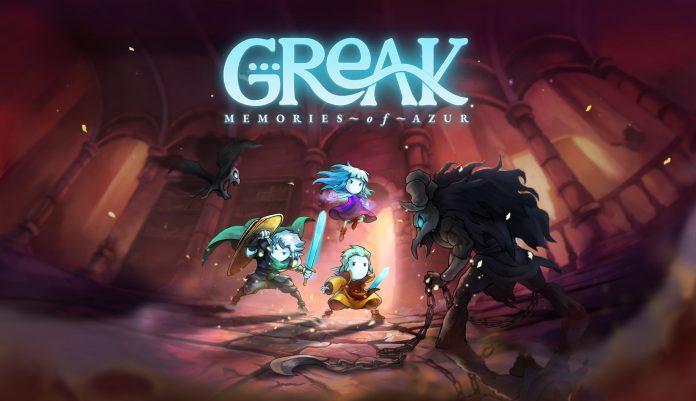 Featuring enchanting hand-drawn art and animation, a mesmerizing orchestral soundtrack, a unique and engaging gameplay mechanic, and a wonderfully captivating narrative, single-player platformer Greak: Memories of Azur launches today on Xbox Series X|S and is an unmissable title for fans of indies, platformers, and games in general.

War rages across the beautiful and hostile Azur, a twisted and unrelenting race known as the Urlags have descended on the tranquil lands, destroying everything in their path and leaving the peaceful Courines no choice but to flee their home.

Fortunately, the Courines are not entirely defenseless against their bellicose invaders; young siblings Greak, Adara, and Raydel have abilities that are prime examples of the magic the race has at their disposal to fend off their aggressors… and combined there is nothing that can stand in their way.

Each of the siblings uses their abilities in a unique manner: Greak is small but mighty and is able to squeeze into places the others cannot, unveiling secrets that would otherwise be missed; Adara is proficient in the arcane arts and uses her magic twofold, it can be used to help propel her through the air, enabling her to reach far off ledges, but alternatively it can be unleashed as a weapon, causing devastating damage to her unfortunate foes; Raydel is the oldest and largest of the siblings, his armor allows him to defend against attacks, protecting them against the enemies.

The Urlags are not the only threat the trio will face in Azur; you’ll need to alternate seamlessly between all three siblings to traverse the hostile landscape and solve the specifically crafted puzzles that await. Starting off with Greak in your party, venture deeper into the world to find his lost siblings, reuniting the scattered family and aiding in the Courines’ escape efforts to build an airship and flee their home.

The evocative narrative of Greak: Memories of Azur is played out against a hand-drawn backdrop, with each of the areas explored more breath-taking than the last. Complimenting the meticulously designed art and animation is an orchestral soundtrack that sets the tone of the adventure with charming, yet haunting, melodies and tunes to truly immerse players into the world of Azur.

Greak: Memories of Azur is a tale of family and of unity. A story of three siblings uniting in the face of unspeakable evil amidst uncertainty to save those they love – and their home – and looks stunning while doing it. 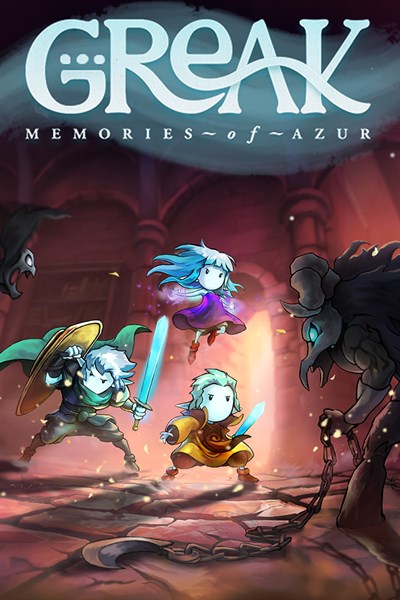 ☆☆☆☆☆
2
★★★★★
$19.99
Get it now
Greak: Memories of Azur is a side scrolling single-player game with hand-drawn animations. You will take the role of three siblings: Greak, Adara and Raydel to guide them through the lands of Azur. Alternate control between them and use their unique abilities to escape from the Urlag invasion.

Greak is the name of the main character, and the smallest brother of three. He belongs to a magical race called the Courines, which are currently under the attack of an enemy invasion from a faction called the Urlags.

This battle has been going on for a long time, and the Courines are starting to flee their own lands. Greak's goal is to reunite with his brother (Raydel) and his sister (Adara) and then escape the lands of Azur by Building an Airship piece by piece.

Throughout the game, you will find each sibling in different scenarios, and once you do, they will join the adventure and help you progress through the game.

Hand-Drawn Art and Animation: Enjoy a captivating story line about family, home and union in difficult times while you discover colorful and expressive scenarios.

Specially Crafted Puzzles: Solve specially crafted puzzles to find and collect the missing pieces of an Airship through an Interconnected and World.

Unique Gameplay: Alternate between the three characters and use their different abilities to explore the Magical lands of Azur.

Fast- Paced Combat: Discover new areas and fight against a wide variety of enemies to rescue the Courines from the Urlag invasion.

Related:
Myst is Coming to Xbox for the First Time on August 26 with Xbox Game Pass
Fairytale Puzzle Game Tetragon Available Now for Xbox One and Xbox Series X|S
Getting Nostalgic About Developing the ‘90s-themed The Big Con