ZemaGames
Home Game Releases Hands On: NEO The World Ends With You Has Us Caught In... 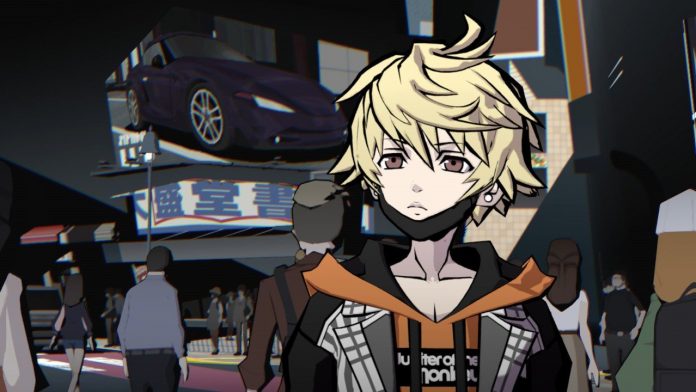 If you were a Kingdom Hearts kid back in 2008, you probably played or at least had ambitions to try out The World Ends With You on DS. Between its sharp, stylized visuals, pull no punches attitude, a bopping soundtrack, and the way it utilized touch and button controls, there’s plenty of reason it sits very high on our Best DS games list. Without going into spoiler territory, the story takes some interesting turns and left fans eagerly wanting more even after it was over. Back in 2010, the game’s character designer Tetsuya Nomura mentioned in an interview that he’d love to make a new game in the series when the time is right.

So 13 years on, after character appearances in Kingdom Hearts 3D: Dream Drop Distance and a remake, we’re finally getting the full-on sequel we’ve been dreaming of with NEO: The World Ends With You.

Ever since its reveal late last year, we’ve been clamoring to learn more about this new entry. Will this new cast of characters even compare to the likes of Neku, Shiki, Beat, Rhyme and Joshua? How can you top the soundtrack of the original? Since the Switch remake sort of missed the mark in the controls department, how will NEO’s combat work on the big screen?

Well, Square Enix was kind enough to invite us to go hands-on with a PS4 build of the game, and even though we would have preferred to see it running on Switch instead, we can still say that so far things are looking zetta fresh.

Another Day, Another Game of Death

Anyone who’s unfamiliar with the world of The World Ends With You (TWEWY for short) will be happy to hear that even though NEO appears to take place in the same world as the original game, you might not need to know the source material to keep the story straight. Our demo started us outright at the beginning taking control of the new main character, Rindo, who’s hanging around the streets of Shibuya, playing some new Pokémon GO-like AR game on his phone (aptly named Fan GO.)

After meeting up with his bestie, Fret, through an unfortunate set of events they wind up becoming a part of the Reapers’ Game, a life or death challenge that takes place in a somewhat alternate version of their own world. If they don’t form a team to take down the enemies known as Noise and solve whatever puzzles the Reapers set up for them, they’ll face permanent erasure. But if they can manage to pull in the highest score amongst all of the other teams on the 7th and final day of the Reapers’ Game, they can have one wish granted.

You’ll learn fairly quickly how Rindo and Fret’s team — the “Wicked Twisters” — managed to get themselves locked in this mess, but even then you’ll still be left with plenty of questions that can only be answered by playing through this death game. Each in-game day, you’ll be given a task by the game master and the first two days involve solving a riddle or finding a set number of landmarks in the overworld, which has gained a nice 3D but somewhat cel-shaded facelift in comparison to the original.

The camera always seems to be locked at a particular angle when you’re roaming around the city, and while you’ll eventually be given full reign of the land as the game progresses, you won’t be able to explore this like a sandbox. Shibuya is broken down into sections, and while the areas we explored didn’t seem to offer much to do beyond listening in on the thoughts of the NPCs or checking out what’s for sale in the shops, the views are still enjoyable.

How do we stay in sync without touch controls?

If you’ve played the original, you’ll need to understand that NEO: TWEWY is a very different kind of game than its predecessor. It still shares many similarities — there’s a confused and somewhat emo kid protagonist, you collect and fight with magical equipment called Pins, and there’s a solid soundtrack with a mix of industrial metal, punk, and EDM — but the combat is what had us most curious and concerned.

The combat did feel a bit button mashy at first, but after we realized we could layer each character’s different attacks together it got us curious about how we can take advantage of it to pull off some wicked combos

Square Enix remastered the original TWEWY for Switch a few years back, and while it was the full-featured game, its controls were a bit finicky if you were playing docked. The DS original utilized both screens of the handheld to allow you to take control of two different characters at the same time. One character was controlled with the touch screen and the other with the control pad or the opposite face buttons. Thankfully, you could play the Switch remake in handheld mode to utilize the touch screen, but it still wasn’t a perfect recreation.

NEO’s combat is more of an evolution of the principles and abilities found in the original game. When in the overworld, you can use a Scan ability that allows you to see enemy Noise the normal pedestrian can’t spot. When in battle you’re able to roam around in a 3D space as one of your party members — beyond jumping and dodging, you’ll attack with whichever pin your characters have equipped. Since you can no longer tap the screen to control your characters, each pin will have a particular controller button mapped to it. Some pins work as projectiles and some get you up close and personal with your enemies. If you manage to switch up and link your party members’ attacks together with the new “Drop The Beat” mechanic, you’ll raise your Groove meter and will eventually be able to pull off a special attack or ability in battle too. 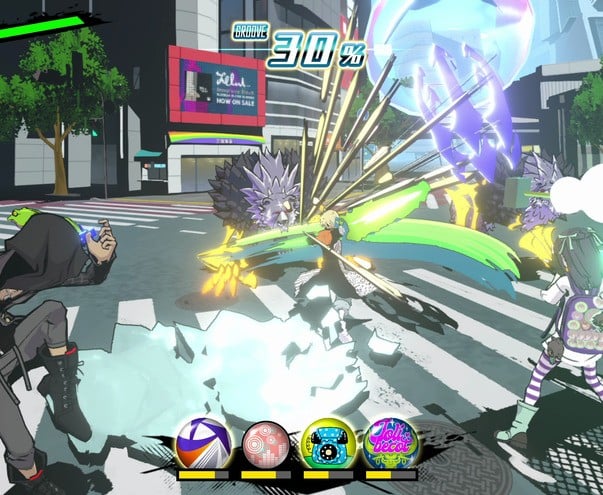 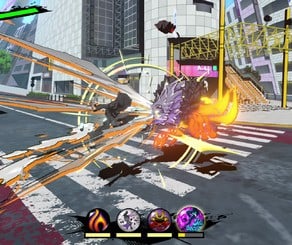 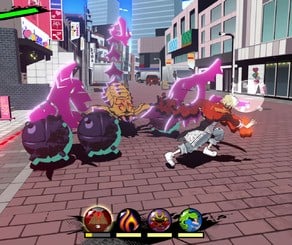 The combat did feel a bit button mashy at first, but after we realized we could layer each character’s different attacks together it got us curious about how we can take advantage of it to pull off some wicked combos. It felt natural having Rindo engulf an enemy with the classic Pyrokinesis pin, then send in Fret to bombard them with Force Rounds and have Sho charging up and at the ready with his Angelic Kick. You’re given a wealth of possible attack combinations and this should lead to the overall gameplay rarely getting stale. Your pins can level up and evolve just like in the original, and you’ll collect new pins regularly through battle, at shops, and during moments in the story.

How does this tie in with the original?

Returning players will recognize a few familiar faces, like Sho Minamimoto, who join your party early on to show you the ropes. Thanks to a trailer that released a month or so ago, Neku, seems to make an appearance at some point as well, but he never showed his face during our demo. Regardless, we’re unsure how another Reapers’ Game even started up in the first place but we’re eager to get to the bottom of it and win that wish!

Rindo and Fret may take a bit to grow on you, but after just a few hours with them and the rest of the crew, we’re already pleased with their character direction.

A good majority of the original development team appear to have their hands in NEO as well, including Tetsuya Nomura and Gen Kobayashi as character designers and Tatsuya Kando as the Series Director. A lot can change in a decade, but so far, NEO is already carving out a nice plot on our shelf of “Most Anticipated Switch Games”. Rindo and Fret may take a bit to grow on you, but after just a few hours with them and the rest of the crew, we’re already pleased with their character direction.

Even though NEO has the ability to use 3D character models for its cut scenes, the majority of them are still propelled by the gorgeous hand-drawn art the series is known for. Each animation is expressive and full of life, and we think it was the right decision in the end. Some scenes are voiced too, with excellent direction and a cast of voice actors who give an extra layer to their characters.

Takeharu Ishimoto, who gave us classics like “Calling” and “Twister” has also filled the composer role, as well. We’re sure we heard a new rendition of the song “Someday” during a heated battle with some Noise, and it was such a comforting feeling to recognize it. Not every song was an absolute banger for us, but there are still some great tracks fans will likely dig deep-ly.

As eager as we’ve been to run NEO: The World Ends With You through the wringer, we’ve been a little worried about how it would all play out. Thankfully, the combat, in particular, seems to have made a successful leap from the controls that we thought were wedded to the DS. Fans have been asking to return to Shibuya for years, and so far we’re genuinely impressed with the glimpse we’ve been shown.

There was a point during our demo when we instantly felt the same chills the original Kingdom Hearts gave us, thanks to a sense of mystery and curiosity about what’s to come next. The soundtrack is spicy, the art is flashy, the combat is quick and slick, and the story has us intrigued but we need to learn more. This new Reapers’ Game is being built for a new generation, but returning fans could have a lot to look forward to after all these years as well. Our time with the game flew by like a feather in the breeze, but after a 13-year wait, we can hold out another month to explore Shibuya again, probably.

NEO: The World Ends With You drops on Nintendo Switch worldwide on July 27th. Let us know down below if you plan on taking part in the Reapers’ Game yourself.