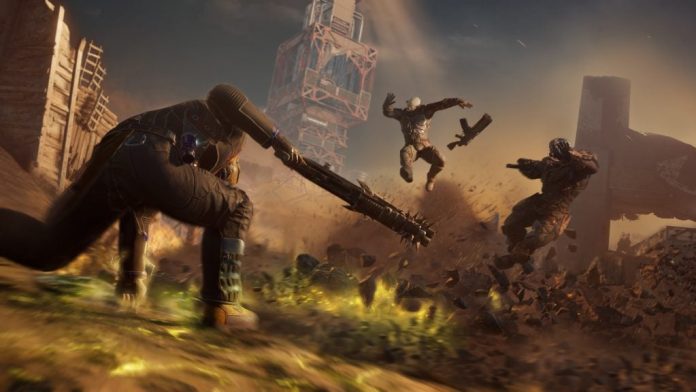 Outriders has an excellent grasp on what makes combat satisfying, giving players an endless array of tools to play with across increasingly chaotic firefights. It feels wonderful in motion, and bodes well for a rewarding shooter experience. Sadly, everything outside of it is under baked and lacking in creativity.

Loot shooters are a dime a dozen nowadays, with the genre packed with titles that grow and expand over time with new content. It’s become impossible to keep up. Outriders seeks to override that notion.

It pitches itself as an experience with none of the live-service trappings to which we’ve become so accustomed. It will have a beginning, middle and end at launch, refusing to hold back content. Despite this, it’s frighteningly similar to its contemporaries on the surface.

It has the loot system of Destiny, luscious planet of Anthem and colourful, rebellious colour palette of Rage 2. The comparisons are hard to ignore, and aside from its excellent combat, Outriders doesn’t do a huge amount to stand out beyond the pack.

Outriders follows humanity’s search for a new home on the planet of Enoch. The Earth is too far gone, depleted of resources and a natural environment capable of sustaining life. So the human race abandons it, constructing a ship in orbit, forcing themselves to find a new planet to colonise. As expected, this new venture doesn’t go exactly to plan.

The opening moments of Outriders feel surprisingly rushed, failing to convey a sense of attachment to its world before you’re thrown into a wild conspiracy of paranormal abilities and warring factions that you really aren’t given a reason to care for. Your wise-cracking avatar walks through a small encampment talking to fellow settlers, all of which feel laughably positive about the situation.

After deciding to expand, you’re immediately attacked by a hostile storm known as “The Anomaly”, which either absorbs people into nothing or curses them with dangerous, unusual powers. It’s basically weather that eats people, with random storms emerging across the landscape that humanity must learn to tackle. If I’m being brutally honest, it’s a striking yet achingly predictable opening.

In a state of panic, you’re hurled back into cryosleep, remaining there for 15 years. The world you emerge to is drastically different, having transformed into a dark, hostile place where different factions of humanity fight for survival. Seconds after emerging it’s straight into the fight, as hidden powers surface, as does the hugely impressive combat system. 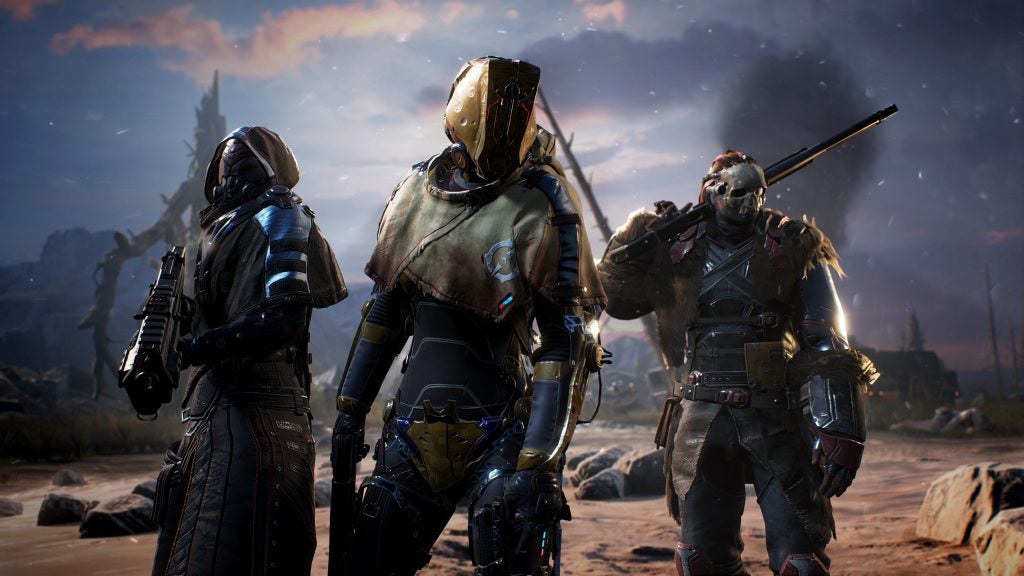 Outriders feels like a novel combination of People Can Fly’s previous efforts, Bulletstorm and Gears of War: Judgment. The cover-based, third-person shooting of Gears is combined with Bulletstorm’s fast, gory and satisfying focus towards aggressive tactics. Despite convenient cover locations being plastered across every battlefield, I seldom found myself using them.

It’s far more enjoyable to incapacitate enemies before rushing out from cover and blowing them into nothing with your myriad powers. Outriders will launch with four distinct classes, three of which have been revealed in the form of Pyromancer, Trickster and Devastator. I spent some time with all three, finding my personal favourite with the Trickster’s absurdly satisfying use of time manipulation.

By pressing both shoulder buttons you can expel a spherical field that slows down anyone and anything trapped within it. Bullets whizz hypnotically through the air, while severed limbs float towards the sky before crashing down the second your field disappears. The Trickster can also zip through the world to ambush enemies and slice them with a long, ethereal sword – it’s brilliant for taking out multiple foes. 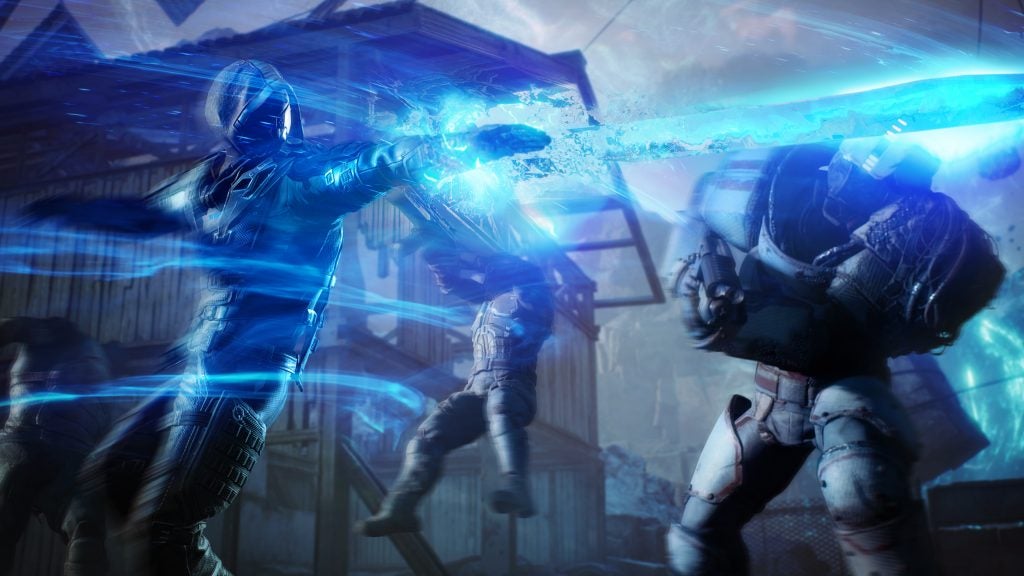 Pyromancy is similar, albeit with a focus on flames with a bunch of ranged and localised effects. You can light enemies ablaze, zapping health from them as they burn alive. It looks incredibly cool, albeit a bit grim. Devastator is the final class, placing a focus on the earth’s physical properties to craft elemental armour and slam those around you into the ground with a pulp.

Each occupation has a vast, uncompromising skill tree filled with unlockable skills and abilities, only a slither of which I saw during my playthrough. I imagine this is where the true depth of Outriders will rear its head, since firefights veer into the realm of repetition far quicker than I’d like. You follow the same rhythmic sequence of attacks to get the job done, filling rival mercenaries with bullets until they crumble.

It’s working alongside other players that brings each firefight to life. Watching as the abilities from each class combine to create a flurry of bloody fireworks is borderline euphoric, presenting a sense of dynamism you rarely see in the genre. Gone is the necessity for cowering behind cover, waiting to take potshots.

Firearms almost feel like an afterthought, but are varied enough that picking up new ones is a meaningful part of progression. Outrider’s loot system is solid, rewarding you with more armour components and equipment after each major conflict – although collecting them could be refined, since it’s currently difficult to determine the difference between ammunition and valuable drops on the field. 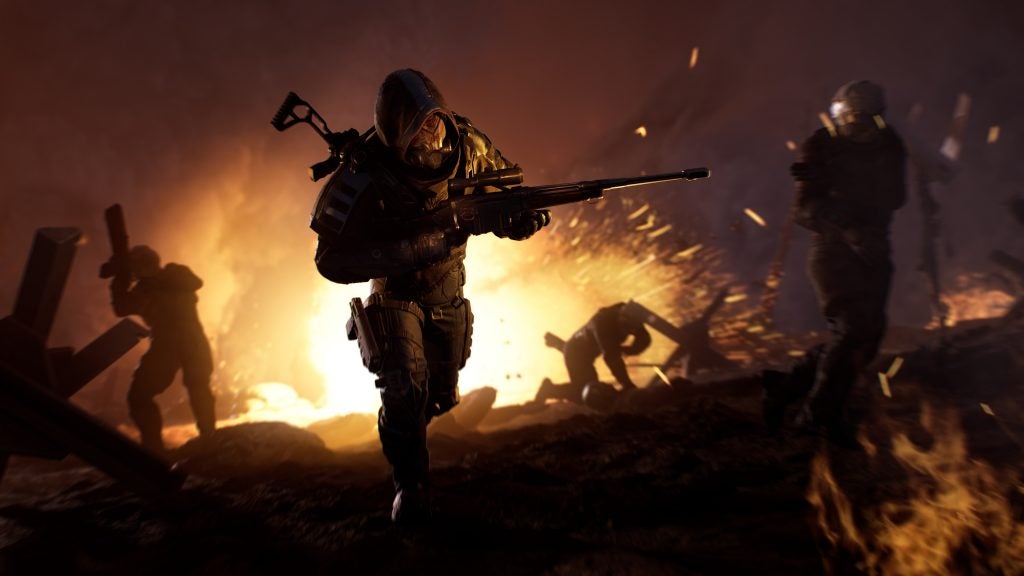 People Can Fly was quick to stress Outriders isn’t open-world; it will split missions across a variety of large, distinct areas. You’ll find checkpoints scattered throughout into which you can slam a flag, claiming the territory as a fast travel point for future adventures. I played through the same handful of missions with each class, having learned the opening area like the back of my hand.

In the full game you’ll likely do the same, recycling levels in the hope of landing better gear. This cycle has defined live-service games this generation, with each scenario being designed in a way that remains enthralling over multiple playthroughs. You’ll find yourself ploughing through them again and again in search of experience, loot and class upgrades. But remember, this isn’t a live service.

Between missions you’ll return to a hub area, but during the opening hours it feels lifeless. There aren’t many characters with whom you can converse, and shopkeepers are devoid of personality, feeling little more than lifeless husks hurling upgrades at you in exchange for spare parts. It doesn’t feel like The Tower in Destiny or Anthem’s Fort Tarsis. While they aren’t without flaws, its inhabitants reacted to your existence, engaging in conversations and pushing the narrative forward in unexpected ways. 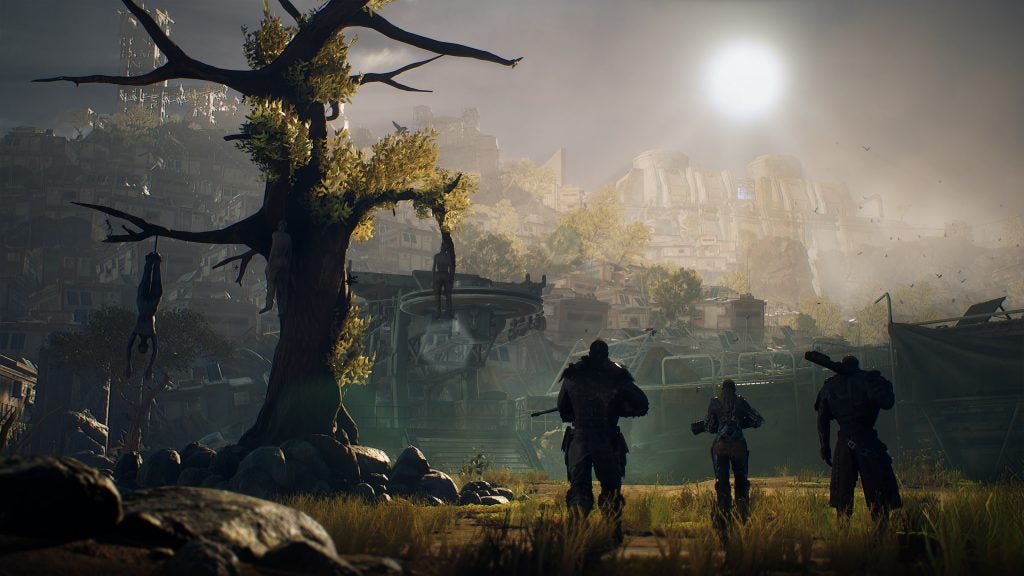 From my experience, Outriders has none of this. Ensuring its world and personality can capture the attention of players in a matter of minutes will be key to its success. The medium is packed with novel, engrossing shooters in which it’s well worth investing, and penetrating that arena shouldn’t be taken lightly.

LawBreakers and Battleborn are just a few casualties of such ambition, glancing up at giants and biting desperately at their knees. It takes something special to enter this fight and stay standing, and time will tell whether Outriders has what it takes.

Outriders has an excellent grasp on what makes combat satisfying, giving players an endless array of tools to play with across increasingly chaotic firefights. It feels wonderful in motion, and bodes well for a rewarding shooter experience. Sadly, everything outside of it is underbaked and lacking in creativity.

Its world, characters and overall tone have been done elsewhere multiple times, and from what I’ve seen so far, People Can Fly has failed to imbue the game with anything new. I zoned out of cutscenes, dismissed dialogue and waited impatiently before I was hurled into the next battle, since that’s all that really matters here. But this mindset shouldn’t be the case, and I hope that changes with the full game.

A ’hands on review’ is our first impression of a product only – it is not a full test and verdict. Our writer must have spent some time with the product to describe an early sense of what it’s like to use. We call these ‘hands on reviews’ to make them visible in search. However these are always unscored and don’t give recommendations. Read more about our reviews policy.