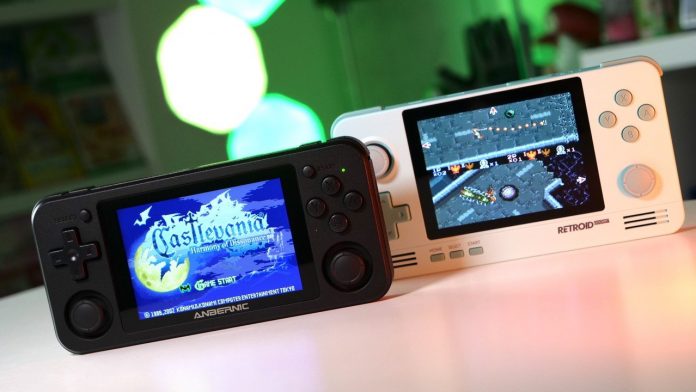 As portable technology has progressed over the past decade, we’ve seen a host of gaming handhelds that don’t run physical games but are instead focused on emulation, replicating the performance of consoles like the Game Boy, SNES, Mega Drive and even Nintendo 64. We’ve covered quite a few of these on the site – including the Pocket S30, RK2020 and BittBoy – but more recently, two examples hit the market and caused more of a stir than most.

The Anbernic R351 and Retroid Pocket 2 are two very similar machines with the same focus, but the way they look, feel and operate is more different than you might imagine. So which is best? There’s only one way to find out…

Editor’s note: It’s worth pointing out that neither of the machines featured here come with any ROMs loaded as standard. The nature of obtaining ROMs online is naturally quite a grey area, and we’d recommend you source your games legitimately, either using ROM-dumping devices or turning your own CDs into ISOs, rather than using sites online. Beauty is, of course, in the eye of the beholder, but in terms of pure looks, the Retroid Pocket 2 is the clear winner here, at least in our opinion. That’s not to say that the R531 is ugly; it’s just a little too ‘functional’ for our tastes. The Retroid Pocket 2 looks and feels like a piece of Nintendo hardware; we love the different colour options and the plastic is wonderfully solid. It also comes in a wide range of cool colours, including one which apes the look of the SNES with its coloured face buttons.

It’s worth noting that the R351 comes in two variants – the R351P (plastic case, no built-in WiFi but comes with a WiFi dongle) and the more expensive R351M (a gorgeous metal case and WiFi built-in). The R351M is utterly lovely from a design perspective, but there’s a huge caveat to consider, which we’ll come to shortly (by the way, we’d like to thank Brandon from Retro Dodo for kindly supplying an R351M for us to play around with).

The R351 has a 3.5-inch IPS screen with a resolution of 320 x 480 pixels, which makes it ideal for running pretty much any console which launched before the HD era took off. However, the display isn’t quite as punchy as the 3.5-inch panel seen on the Retroid Pocket 2, which, while being brighter and more colourful, also boasts a higher resolution of 640 x 480. It’s worth noting that the R351P we reviewed had uneven levels of brightness and a dead pixel right on the left-hand side of the display (which thankfully didn’t impact gameplay and was almost impossible to see unless we were playing in total darkness).

Both of these machines offer a similar control configuration, but there are some interesting quirks to note. The R351 places the D-Pad above the left-hand analogue stick making it easy to use for prolonged periods, while the Retroid Pocket 2 has it below – which makes it a little more awkward to reach. While we prefer using digital input for our retro gaming, you might find that having the analogue stick in a higher position suits you better. However, we prefer the D-Pad on the R351 because it has more travel, and it’s worth noting that while the R351 offers dual analogue support, the Retroid Pocket 2’s right-hand analogue stick is, in reality, a four-way digital pad. The four shoulder buttons on the R351 are arranged side-by-side in two pairs, while on the Retroid Pocket 2 they’re one on top of the other (the more traditional arrangement).

Now for that R351M caveat we mentioned. For some reason, the D-Pad on this model makes it really, really hard to hit diagonal inputs – which is strange because the R351P’s pad doesn’t suffer from this issue. Some R351M owners have mused that it could be due to the fact that the metal casing has less ‘flex’, and have even opened up their machines to mod the D-Pad. We’d recommend you avoid doing this and simply opt for the R351P unless you prefer using the analogue stick; while the lack of onboard WiFi on the plastic version is irksome, the bundled dongle does the job perfectly well anyway.

Both machines use MicroSD cards for storage, and while they ship with 64GB variants (the ones we reviewed did, at least), we’d recommend purchasing something larger. The R351 places both the OS and game files on the MicroSD card, while the Retroid Pocket 2 has a small amount of internal storage for the OS and other files, but you’ll want to keep most of your games on the SD card.

Both machines offer a similar level of battery life, and both last for around 4-5 hours between charges (there’s a USB-C port for this). These figures are naturally likely to change depending on several factors, such as volume level, screen brightness and the nature of the games you’re playing. While both of these systems have the same end goal – to run emulators and play ROMs – they’re quite different under the hood. The R351 is running an OS called EmuELEC, while the Retroid Pocket 2 is packing Google’s Android operating system (version 6.0, specifically). This means the two systems have a very different ‘feel’ when it comes to everyday use and their interfaces.

First up, with the R351, we’d highly recommend you ditch the stock OS and install 351ELEC instead (there’s a guide on how to do that here). With this OS installed, using the R351 is an absolute breeze. The main menu is slick and fast to navigate and makes stuff like ‘scraping’ the web for game titles, screenshots and box art almost entirely painless. We say ‘almost’ because it still took us a while to get everything in order, but it was well worth the effort. With 351ELEC installed, the R351 just ‘works’ out of the box – it feels really polished and hassle-free, with stuff like button mappings and save data all handled with ease.

Comparatively, the Retroid Pocket 2 is a little harder to get to grips with, mainly because it uses Android. It’s a double-edged sword; Android is a much more versatile OS than EmuELEC and 351ELEC, and allows the Retroid Pocker 2 to do a bunch of cool things that the R351 can’t – such as streaming video and installing Android apps and games – but it also has some of its own annoyances. Because the hardware inside the Retroid Pocket 2 is quite modest by Android standards, moving around the UI is often sluggish, and you have to constantly switch between the analogue stick (which acts as a touch-screen pointer) and the D-Pad (for playing the actual games). This is done by long-pressing the ‘Home’ button. Both machines can run Retroarch, which means you get a very similar experience across both when it comes to performance and features

While it takes longer to get comfortable with the Retroid Pocket 2 and it never feels as instantly accessible as the R351, the extra scope is appealing. For example, you can play the Android port of the fan-made Metroid title AM2R, which runs brilliantly on the device. While the hardware is relatively weak, it’s capable of handling quite a few Android games, although the lack of a proper touchscreen interface does put some titles out of reach.

In terms of actual performance when it comes to playing retro games, there’s not a massive amount of difference between the two, in all honesty. This is because both support RetroArch, which is pretty much the de-facto standard when it comes to software emulation. Dreamcast and PSP emulation are possible on both systems, but they’re so hit-and-miss that you’ll likely want to stick with older consoles, such as the 16-bit and 8-bit generations (although it should be noted that PlayStation emulation is excellent and N64 emulation is also good, depending on the game).

Unfortunately, one thing the Retroid Pocket 2 would have been really good for – Xbox Cloud gaming – refuses to work, at least for us. While we were able to download and install the dedicated Android app, it crashed every time we tried to open it, while trying to access the Cloud Gaming Beta via the Xbox.com site simply caused the browser to hang. However, steaming is possible, it’s just that we haven’t been able to test it personally ourselves. Nonetheless, it’s another example of how the Retroid Pocket 2’s Android OS allows it to do some really neat things. While the focus of these systems is very similar, you should perhaps consider what you want from a handheld retro device before picking one, as they both have their good and bad points. If you value a slick and speedy interface with a brilliant D-Pad and aren’t too fussed about pushing the hardware in different directions, then the R351 is the best bet. However, the fact that the Retroid Pocket 2 runs Android means it can do a lot more – although this is balanced out by the lack of dual analogue and a slightly weaker D-Pad.

In terms of cost, there’s not a lot of difference between these devices, so it’s really down to the kind of user experience you’re after. The R351 is the kind of device that, once you’ve got it up and running, is a breeze to use, while the Retroid Pocket 2 can arguably be exploited in other ways due to its Android architecture – which means you can potentially install new front-ends or download Android apps which broaden the horizons of the device. It really depends on how adventurous you want to get, but in all honestly, either device will serve you well if you’re looking for a pocket-friendly way of connecting with gaming’s past.

Thanks to DroiX for supplying the R351P and Retroid Pocket 2 featured in this review.