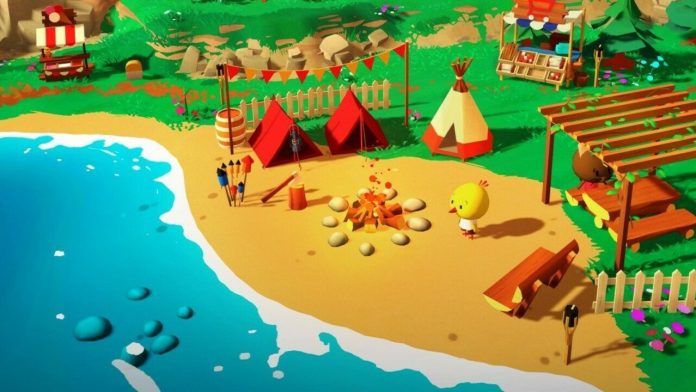 Exploration is a big ol’ deal in some video games; you only have to look at something like Breath of the Wild or A Short Hike in order to see that. Haven Park leans heavily into that idea, and shares some DNA with the latter game we mentioned. Not least of all because you play as a bird.

Haven Park sees you controlling Flint, a young bird who’s been tasked with repairing and maintaining an island that seemingly belongs to his philanthropic grandmother. It’s chock full of points of interest, natural beauty, and most importantly for the gameplay, campsites. You’ll be gathering supplies in order to build up shelter and food sources for eager campers looking to impose themselves on your hospitality for coin as you peruse and hike your way through the scenery on offer. This side of things is fairly basic, but it does provide a fair degree of freedom and much-needed respite from the otherwise potentially aimless wandering.

And the wandering really is the jam in this gaming doughnut if we hadn’t made that clear already. Finding campsites, scouting for truth about rumours you hear from campers, finding the mushrooms necessary to build a working radio (yes, really) — everything funnels you down a new path or three to discover something new. It’s certainly a pleasant surprise to hear about some hidden treasure from one person, only to have another camper provide further details that lead you to being able to discover the promised booty, but sometimes Haven Park doesn’t quite hit the difficulty mark. 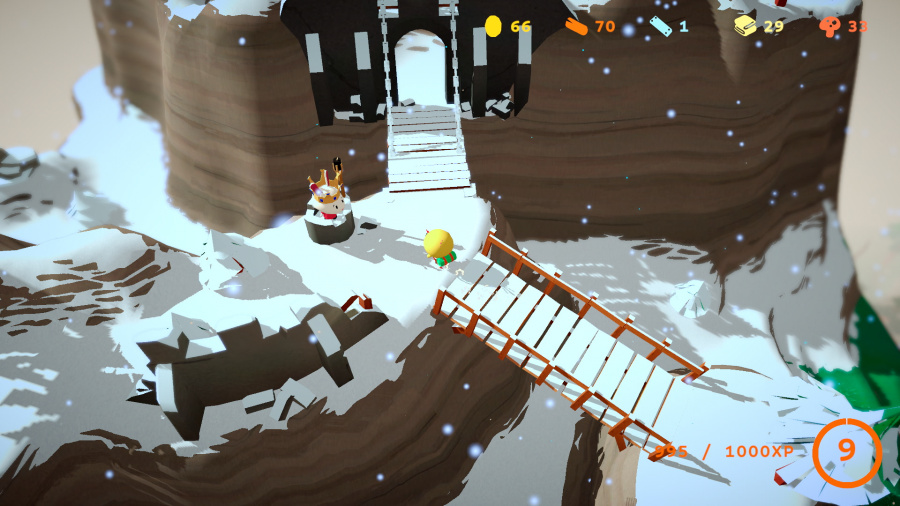 At times puzzles or objectives are laughably simple, which would absolutely be fair enough if some others weren’t uncharacteristically obtuse. One of the highlight subquests had us reading a sort of Choose Your Own Adventure book and, at one point, requiring us to retrieve an in-world shovel in order to progress. Despite not making much sense, Flint also exclaimed that he saw a shovel in ‘a construction area’, but without giving any other indicators of where it could be on the island. We eventually found it embarrassingly close to the book we were reading, but to call two warning signs, a shovel, and a pickaxe in a small dip a ‘construction site’ felt a little bit unclear in the moment, and with no note about what we were looking for or way to re-read the book we started double-guessing if we hadn’t misread or misinterpreted the entire thing.

Movement is also in need of a bit of a tweak in our eyes. For some reason if you so much as brush against a tree or a rock you’re brought to a near-standstill as though the object were supremely sticky. Most games would simply have your character skirt around the blockage or even pass through it completely, and considering how many blinking shrubs scatter the picturesque landscape, it can be a bit tiresome to have to navigate so precisely. Eventually we started jumping and running all but constantly to circumvent this.

But despite all this we still very much enjoyed our time with Haven Park. The visuals are well-realised with some ambitious depth of field and particle effects (which do put a dampener on performance but we think it’s worth it), and slowly but surely making our way to the higher portions of the island felt just taxing enough to be rewarding.

Haven Park is a lovely game that suffers a bit from strange movement choices and a partially underbaked camp construction system. These cons aren’t dealbreakers by any stretch, but they do somewhat sour what could’ve been a truly stand-out example of a bite-sized, wholesome little game. We’re still glad to recommend it, but don’t expect the same level of polish as other bird-based island exploration jaunts you can find on Switch.

Oh, and if you press ‘A’ with nothing to interact with in front of you, Flint says ‘Pew’. 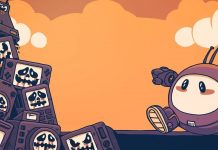 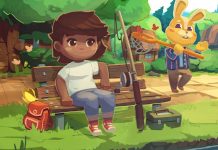