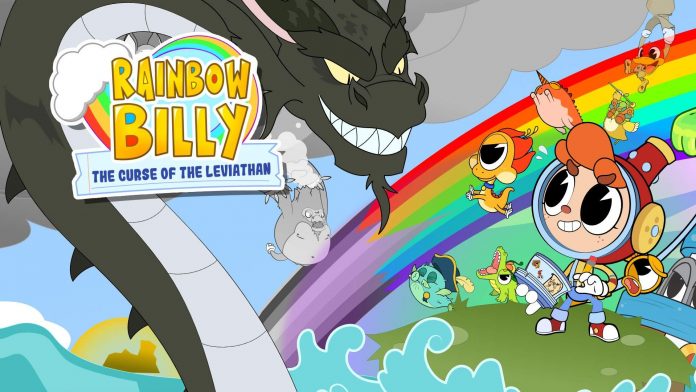 It’s been a long time coming, but the whole team at ManaVoid (myself included) are thrilled that Rainbow Billy: The Curse of the Leviathan is finally out on Xbox One. And with the last year or so being especially rough for most of us, we figure there’s no time like the present to release a non-violent game that champions acceptance, inclusivity and compassion.

Saving the world from a giant monster by fighting enemies and recruiting party members is pretty familiar RPG territory. But in Rainbow Billy, things play out a little differently… And not just because you’re bringing color back to a black-and-white world.

Instead of all-out slugfests where you beat the stuffing out of adorable cartoon critters, “battles” play out like emotionally puzzling heart-to-hearts. Your goal isn’t to defeat your enemies, but to listen to their worries, choose the right words, and bring color back to their hearts to befriend them. Plus, you don’t grind fights to level up: you offer moral support (and candy) to get to know your allies better, strengthening your bonds of friendship.

This decision to create compelling, non-violent “confrontations” came from a decision we made as a team to stand out from the vast majority of combat or violence-oriented titles on the market. Plus, it made a lot more sense for a story about accepting ourselves and others for who we are to revolve around empathy.

Likewise, we didn’t want that message of accepting others to ring hollow. We partnered up with Skybound Games and the non-profit RAD to make sure we found a sweet-spot between wholesome cartoon hijinks and earnest, accurate depictions of mental health struggles, particularly in regards to characters with specific gender identities.

We also wanted to extend those in-game themes of acceptance and inclusivity to our players too, so a big part of development revolved around making the game accessible to as many people as possible.

Our art team took special considerations with designs, shaders, and color palettes, so even colorblind players can feel the visual satisfaction of recoloring the world bit-by-bit! We also took special care to develop multiple customizable difficulty settings that wouldn’t reduce the strategic complexity of confrontations or puzzles.

On top of that, we included a localization-wide dyslexia-friendly font option and tactical text boxes to make dialogues easier to follow! We also made adjustments to subtler elements camera movement, animations and respawn locations that make the game easier to pick up and play for everyone!

If you want to learn more about these features, our Technical Director Alexis Lessard created a Twitter thread detailing some our accessibility initiatives in greater detail. You can check it out right here!

It’s been genuinely heartwarming to see Rainbow Billy resonate with players of all walks of life and their support has been integral to making the game what it is. I think I speak for the whole team when I say I can wait for everyone to finally experience the same cuteness-overload squeals and tearjerker moments as those who experienced our demo!

Rainbow Billy: The Curse of the Leviathan is out for Xbox One and Xbox Series X|S. Here’s hoping it fills your world with a bit more color too!

Rainbow Billy: The Curse of the Leviathan

☆☆☆☆☆
★★★★★
$29.99
Get it now
HEROES COME IN ALL COLORS.
Rainbow Billy: The Curse of the Leviathan is a wholesome, creature capture, 2.5D Adventure-Puzzle-Platformer with RPG elements. It is a family-friendly and openly accessible adventure in which you must save whimsical creatures by bringing back color to the world you once knew!

Rainbow Billy tells a universal coming of age story about dealing with changes in the world and accepting ourselves and the others around us! Sometimes it only takes a conversation, empathy, and a new point of view to make a world of a difference.

EXPLORE A WONDROUS WORLD!
From dark caverns on secret islands to hidden coves off in the stormy seas, explore a rich world filled with treasure, fish (because every great game has a fishing minigame!), friendship and… danger!

SOLVE ENVIRONMENTAL PUZZLES!
Each world is filled with clever challenges and secrets that unlock new areas to explore!

BEFRIEND CURIOUS CREATURES!
Meet over 60 strange, lovable creatures and help them with their problems in non-violent encounters! Create your own unique team to save the day!

RECOLOR THE WORLD!
Restore color to a monochrome world and help your friends find the courage to be their true selves in a story about empathy and growth.