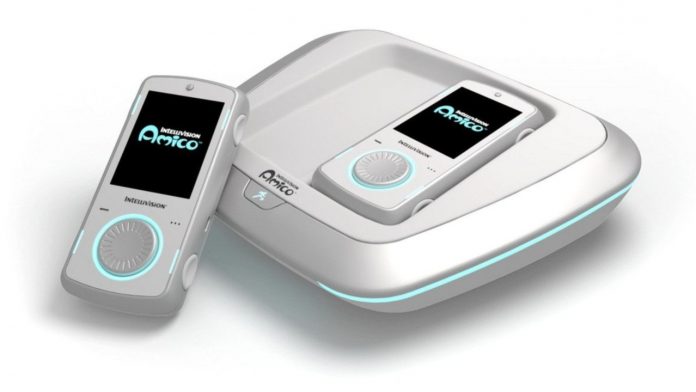 Those who pre-ordered the much-delayed Intellivision Amico console have been told via email that they’re going to have to wait a little longer to get their hands on the machine.

The system – which features Wii-style motion controls and a unique Wii U-like controller – was supposed to launch in October of 2020, but the ongoing COVID-19 pandemic saw this date get pushed to April 2021. This was then changed to October 2021 before this third delay.

Here’s the statement that was sent to those who have pre-ordered the console (thanks, VGC):

The team at Intellivision has been working tirelessly to bring Amico, our family-focused entertainment system, to eager households around the world.

We’ve grown to a strong and stable company of more than 60 passionate team members spanning three continents, representing some of the industry’s best talent. All of us are extremely excited to share Amico with you.

We originally planned to launch Amico in the Fall of 2020 but had to adapt during the midst of the global pandemic disrupting our production.

Despite our best efforts, and now facing new unprecedented international component supply and logistics challenges beyond our control, we want to apologise as we are forced to push our desired launch date yet again.

In spite of these supply hurdles hampering our ability to fill all orders, we are focused and determined to deliver pre-ordered units by the end of the year. This will also allow us more time to optimise our operating system for future game development.

We want to ensure that those who have anticipated the Amico for so long, get a chance to enjoy it as soon as possible. Of course, we will keep all of our customers and interested parties informed and updated on our continued progress.

Intellivision adds that those who have pre-ordered will get a “very special thank you gift via email next week” as an apology.

The final hardware is completed and we’ve passed almost every compliance test around the world (over 50 tests) and for the most part, we are ready to go into production. But there are over 700 different parts that make up an Amico and over 100 of them are electronic components. Unfortunately, because we have touch screens on our controllers, as a small company we are finding it extremely difficult to secure 4 of those 100+ parts. We started securing components last November. We’ve been spending millions in order to achieve this and be ahead of the game. But so many things have been changing so quickly and all of this stuff comes from China. That is how Playstations, Xboxes and Switches are made. No exceptions, but that is the reality of electronics right now.

At the end of July, Intellivision even published a video showing “50,000 physical products” being packed in the factory, ready for the proposed October release.

A family-focused revival of the Intellivision brand which was popular during the early ’80s, the Amico has come under fire recently following the publication of documents from the Amico developer portal, as well as the fact that its games look rather uninspiring when compared to titles running on consoles like the Switch (the Amico’s price puts it in competition with Nintendo’s hybrid system). However, Tallarico has assembled a pretty robust team at Intellivision – including former Nintendo executives – and he’s adamant there’s a place for another Wii-style home console in the market, even with the Switch selling almost 90 million units.

Were you one of the people who pre-ordered the Amico? What are your thoughts on this latest delay? Let us know with a comment below.