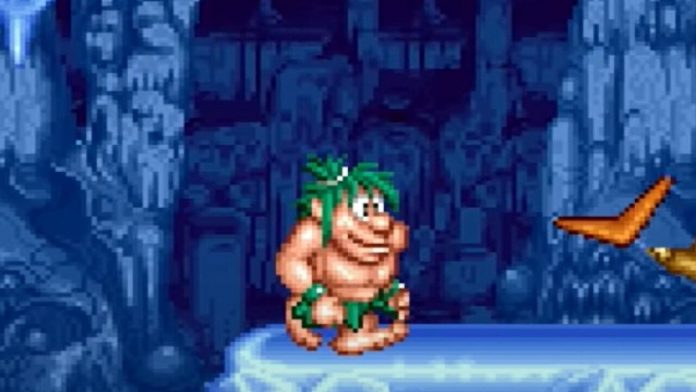 With five new additions to Nintendo Switch Online’s catalogue of NES and SNES games arriving today, we decided to review these new/old releases to help you decide which to play first. Enjoy!

There was a period in the early 1990s when the video game industry was in love with caveman characters – after all, an executive somewhere thought that the TurboGrafx-16’s Bonk was a suitable mascot to face off against Mario and Sonic. Among one of the most prolific of these games was Data East’s Joe & Mac, a conversion of the arcade game known as Caveman Ninja. In this game, a duo with brightly coloured hair fight back against a rival tribe of Neanderthals, who’ve kidnapped all of their women, while also facing off against a horde of dinosaurs and other prehistoric nasties like woolly mammoths. Our heroes are equipped with a variety of period-appropriate weapons, including bone clubs, stone wheels, flint (to throw fire) and boomerangs.

Like many Data East titles, the action lacks the polish of other more well regarded companies. But the comical visuals, goofy expressions of the characters and strange sound effects create a silly atmosphere that makes the game fun to play, in spite of its floaty controls and annoyingly designed boss encounters. It’s also gloriously weird, as the final stage takes place inside of a dinosaur’s body, where you face off against some kind of devil that’s apparently controlling it from within. It also offers two player simultaneous play, and since the difficulty is more forgiving than, say, Contra III, it’s certainly more suitable for co-op play.

The SNES conversion of Joe & Mac mostly duplicates the look and feel of its arcade original, though it’s missing some of the effects and animations, and the framerate and action is more sluggish. But unlike the other home ports it’s actually expanded quite a bit with more levels, as well as a Super Mario World-style map that connects them. Some of the levels themselves are also a bit longer too, which include some keys that let you unlock doors on the map screen that lead to bonus goodies.

Conversely, some power-ups are missing, like the hot sauce that lets you breathe fire, and you can no longer charge up attacks. While your life meter is generous, each new life starts you off with a default, short-ranged club weapon, which makes it difficult to attack effectively until you find a power-up. Despite some of these issues, it’s certainly a richer game than the (somewhat brief) arcade experience, so it sets itself apart from the Caveman Ninja arcade game already on the Switch eShop as part of the Johnny Turbo’s Arcade series.

Joe & Mac isn’t a classic – in the grand scheme of prehistoric caveman games, it sits below Bonk but above Prehistorik Man and Chuck Rock. But it’s a mildly amusing diversion, particularly with a friend.