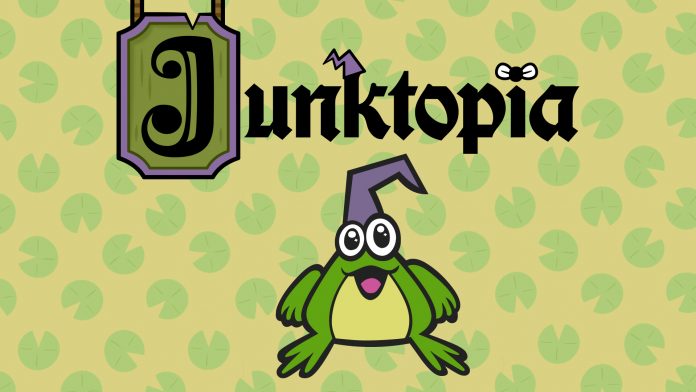 In Junktopia, coming this fall in The Jackbox Party Pack 9, one person’s trash is another person’s more expensive trash! We’re excited to share the game’s introduction today with Xbox fans looking for their next favorite party game.

At the beginning of Junktopia, players are unlucky humans turned into frogs by a deranged wizard. He may have put you in a bit of a pickle but he’s also rooting for you! This wizard needs your help. He loves weird old human things but he hates their boring backstories. That’s why he needs you to make up some funny facts about them.

Our human/frog heroes embark on a quest where they must buy a strange and mysterious item, give it an amusing backstory and then get it appraised to resell. The player who nets the highest profit margin wins the right to get transformed back into their human form.

In making Junktopia, the team wanted players to have creative freedom without it feeling overwhelming. Whether you’re a player who prefers guidance when writing silly stories or you prefer total freedom, this game is designed with you in mind.

The items themselves are pictures of mostly real-life objects that are curated by the team. During the game, you are selling your object by giving it origin stories and fun facts. The game sets you up to do this by giving prompts where you are filling in blanks to help you get started, such as:

There’s also an option to write your own fact from scratch if you’re so inspired.

According to Editorial Lead Liz Anderson, items that made it to the game are familiar, like one would actually find at an antiques auction, but slightly “off”- evocative, weird, or wild enough to push the player to justify why that thing is the way it is.

As with other Jackbox titles like Patently Stupid, you have the ability to present your item for bidding firsthand or let the game share your facts for you. If your item is deemed to net the most profit, POOF, you’re human again. Although, based on how cute these frogs are, is a loss really a loss?

The idea for this game came to Game Director Spencer Ham two years ago. An avid antiquer, he was inspired to create a Jackbox game centered around the truly bizarre items he’d see at various antique malls throughout the midwest.

Junktopia exists in a world of magical moments and spells that flop. The game is set in a ramshackle shop of curiosities that’s held together by powerful magic and duct tape. Lots of duct tape.

To create the environment where the wizard is both your foe and your friend, Lead Artist Owen Watson looked to Zelda: The Wand of Gamelon, Merlin from The Sword and the Stone, Ren & Stimpy, and Fuzzy Lumpkins from The Powerpuff Girls for inspiration. To balance out the roguish nature of the wizard, Artist Steff Egan created his extra-cute frog sidekick and the frog avatars representing the players.

Players won’t be able to stop grooving along to the music in the game by Elise Wattman. The music was inspired by John Hartford, Jaco Pastorius, First Aid Kit, Flatt & Scruggs, and Bela Fleck. What results is what we’re calling “enchanted bluegrass”! We’re excited to bring Junktopia to Xbox players this fall! Other titles already announced in The Jackbox Party Pack 9 include Roomerang, Fibbage 4, and Nonsensory. Follow Jackbox Games on Twitter, Facebook, Instagram, or TikTok to be the first to see our final game announcement later in the summer. 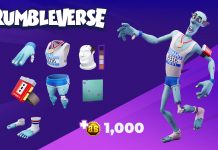 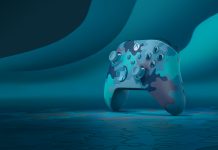