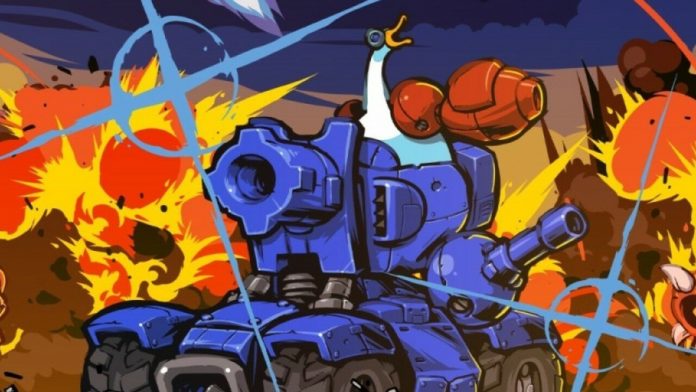 Geese are really going from strength to strength, aren’t they? After conquering the indie scene in House House’s Untitled Goose Game, the species is now taking to the sky with Mighty Goose, a side-scrolling shooter that offers a flavour of games like Metal Slug and Mercenary Kings. With minimal plot to back up the chaotic gameplay, you’re tasked with simply going from level to level in a variety of locations to unleash destruction upon waves of enemies. That’s really all there is to it.

Starting off with a standard hand cannon, Mighty Goose feels reasonably well equipped from the start, but it’s not long until you begin to pick up new weapons like shotguns, machine guns, and rocket launchers. These weapons have a finite amount of ammo, so you go right back to the hand cannon once you run out, but thankfully weapon pickups are incredibly frequent throughout the game.

Actual gunplay feels slick and responsive, and you can shoot either horizontally or vertically; jumping and then shooting down actually lets you hover in the air for a short while, as the kickback from the guns keeps Mighty Goose airborne. This works even better with more powerful guns like the shotgun, and is incredibly satisfying to pull off when you encounter an enemy with a front-facing impenetrable shield.

Although the gameplay feels great for the most part, the action can often get a little too chaotic. Mighty Goose isn’t the most resilient of protagonists, with a measly four chunks of health keeping him going at all times; when you’re up against dozens of enemies coming from every direction, don’t be surprised if you get hit by a projectile you never even saw coming. Keeping track of all the action can be tough, and the game almost feels a bit unfair at times as a result.

To exacerbate this issue, the checkpoints throughout can be needlessly harsh, and actually seem to get wider apart the further along you progress. Thankfully (well, in a way), the steep difficulty curve comes pretty early on, so once you get to grips with how attacking and dodging works, you’ll find your ability to stay alive gets much better as you get into the later levels.

The game also comes with an Armoury option within the main menu; here, you can toggle various abilities to aid you in battle, such as the ability to increase your movement. You can also select your secondary weapon, which rather hilariously starts off with a simple “honk” that accomplishes nothing other than a cheeky giggle.

Other than the overly chaotic nature of the action, Mighty Goose is a visual treat, oozing style with its character and environmental design. The companions are also well realised, and can actually be played by a second person via co-op, although their abilities are arguably far inferior to Mighty Goose itself. Regardless, whether you play on your own or with a friend, Mighty Goose is a blast, and while it’s a bit short-lived at three-to-four hours, it’s definitely worth a shot if you’re up for some over-the-top run ‘n’ gun action.