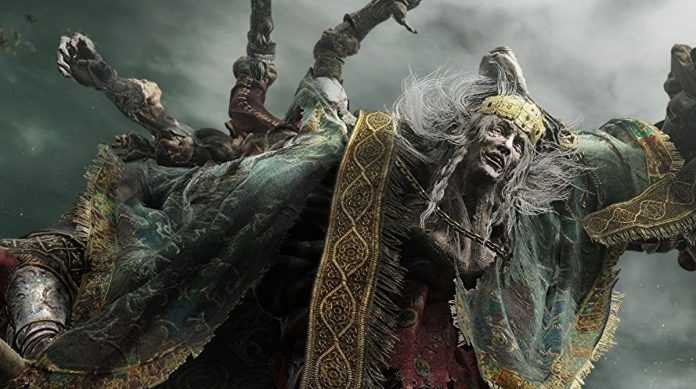 At long last, we finally got a proper look at Elden Ring during Summer Games Fest last week, and all of a sudden we now have a flood of information about what to expect in the upcoming game. In an interview with IGN, legendary director Hidetaka Miyazaki gave plenty of information on the background lore, along with some discussion of abilities, multiplayer and the game’s structure.

One of the first topics discussed was Elden Ring’s setting, The Lands Between, which has been deliberately designed to give “an enormous sense of scale and this broadness and openness”. It’s split into six major areas, each of which is the domain of a demigod. These are lined up to suggest a specific order in which to tackle them, but the player can make their own decisions about which to do first. “You won’t be able to access everything from the start, but there are a lot of different ways you can approach each area,” Miyazaki explained. “And there’s a lot of freedom as to which order you tackle different areas as well.”

Players will be able to access a hub area a little later in the game, which you can “branch out from”, and also the six main areas of The Lands Between. “These will be the domains or the areas of the main demigod bosses,” Miyazaki explained. “From here, you’re able to explore not only these mainline dungeon areas, but also a wide variety of catacombs, castles, and fortresses, which are interspersed throughout the map. These have a range of scale and scope, but the main dungeons are these six – these are the ones that you’re going to be heading to on your adventures throughout the main world. “

This all sounds like a massive map, and thankfully, Elden Ring will indeed have a fast travel system for long distances.

In terms of gameplay, the player will be able to jump – which should hopefully help with dodging attacks from some of those massive monsters, and players will now be able to ride around on horseback (as the trailer suggested). New additions to combat include the ability to “summon the spirits of deceased enemies and use them as allies in battles,” which Miyazaki described as just one alternative to simply going head-on. “So we have a number of elements that let you approach different situations at a high level of freedom,” he added.

As for how you can acquire these abilities, Miyazaki mentioned that while some can be bought from stores or acquired from NPCs, they are generally “hidden throughout the game’s world for the player to discover through exploration, rather than unlocking them through a skill tree as in previous titles.”

Another difference from previous FromSoft titles (where skills and weapons were linked) is that players will be able to “freely interchange skills between a large variety of weapons” and also learn magic. And it sounds like there will be plenty to choose from, with 100 skills in total. “We think the build customisation is going to be even richer and even more varied than before,” Miyazaki explained.

The Elden Ring website previously detailed that the game would have some form of multiplayer, and Miyazaki explained this will take the form of summoning “fellow players for cooperative play.”

Miyazaki also went into a fair bit of detail on the game’s lore, which explains a bit about why the player is called The Tarnished:

“…In the world of Elden Ring, The Lands Between are blessed by the presence of the Elden Ring and by the Erdtree, which symbolises its presence, and this has given grace or blessing to the people throughout the land, great and small. What this represented in them is this sort of golden light, or this golden aura, that’s specifically shown in their eyes. And this symbolises the blessing or the grace of the Erdtree. However, after a time, there were some individuals who lost this grace, and the light faded from their eyes. And these are what are known as the Tarnished.

There’s plenty more discussion of Elden Ring’s lore and George R.R. Martin’s contributions in the full IGN interview, but another interview with Famitsu also provided extra details on the game. Like the Dark Souls series, players will create their own characters (rather than playing as a set character like Sekiro). There are multiple endings, and the path to each of these is apparently quite free – meaning you hopefully won’t end up stuck down a set path early in the game.

Multiplayer co-op will be possible in large open areas and boss battles – but you seemingly won’t be able to ride together in multiplayer. There’s also some asynchronous multiplayer, with players able to set up groups and keywords.

Miyazaki also confirmed that Elden Ring is the largest game ever made by FromSoftware, and that playing without many detours should take about 30 hours.

Phew, after years of silence that sure is a lot of info. And we haven’t even had Bandai Namco’s E3 presentation yet (where, assumedly, we may be able to see or hear about Elden Ring). For more details on how to tune in for that, make sure to check out our E3 conference guide.