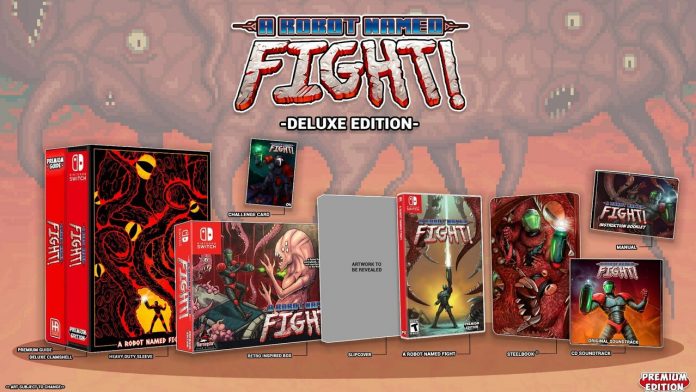 There are quite a few limited edition game distributors in the Switch market, with the enthusiasm of the collector’s market allowing eShop titles to find an additional audience – and a valued extra source of revenue. There are some well-known big players in this area, but Premium Edition Games is a smaller organisation that emerged last year and seems to be slowly growing into a solid outlet.

A bit of a twist is that Premium Edition Games often offers three bundles – Premium, Retro and Deluxe. Each has different standard goodies, and the publisher has even produced a ‘Retro Edition Upgrade’ for one of its original releases – Super Blood Hockey – that offers up some neat aspects of the edition but without the actual game, with a lower price to match.

In any case, the publisher has confirmed its next three major projects. Two will open for pre-orders on 15th June – there’s Demon’s Tier+, which is a fun twin-stick roguelike, and there’s procedurally generation sort-of-like-Metroid title A Robot Named Fight, another game we quite liked in our review.

Pre-orders are also open now on Sunshine Manor, an intriguing horror RPG that was only confirmed for a Fall release relatively recently. This was an edition that the publisher successfully funded via Kickstarter, which seems to be a spin-off (of sorts) from the main store releases.

Perhaps the physical publisher’s most notable release to date will be Cathedral, which will be part of its next ‘season’ of titles – the platformer had a bit of buzz when it landed earlier this year. It’ll come down the line, its announcement was just a ‘teaser’ at this stage.

Let us know if any of these games, and the rather neat approach to extras that Premium Edition Games follows, are tempting you into a pre-order.