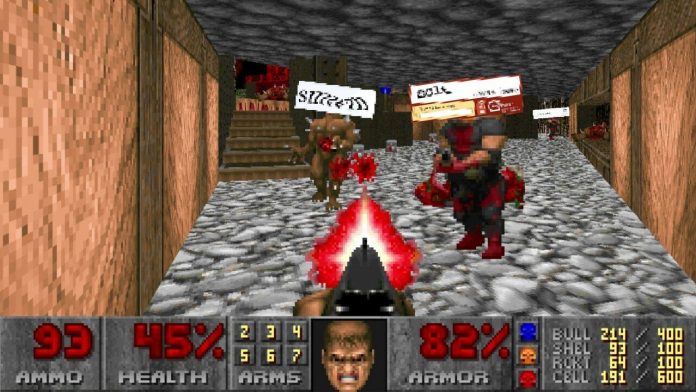 No one likes CAPTCHAs. We all understand that they’re a necessary evil, to stop evil robots from infiltrating our favourite Metroid fanfic forums and writing nonsense about Samus Aran and Mother Brain kissing, but do they have to be so terribly boring? It’s all, “click here to prove you’re human” and “please select all squares containing pigeons having an existential crisis”, and if anyone finds those fun, then they’re almost definitely a robot anyway.

Anyway, those boring days are behind us, because DOOM CAPTCHAs are here. Not officially, mind you — these are the brainchild of Vivir En Remoto, AKA Miquel Camps Orteza, a web developer from Spain. He’s also made his CV in Zelda, created this rather gorgeous Breath of the Wild parallax image, and a version of Super Mario Bros. that you can play with your hands. Not the normal way, with controllers, but your actual hands. Try it!

Miquel’s latest project is the DOOM CAPTCHA, which — much like one of those ads for tower defense mobile games — requires you to kill enemies in order to proceed. Everyone knows that bots are bad at shooting, so it’s foolproof, right?

Well, it’s not actually foolproof. As Miquel himself says on the website, “Don’t take this too seriously, this is a little project for fun, if do you know how to code it’s pretty easy to break the security of this.”

The project was highlighted on Product Hunt, and after one businessman asked whether the DOOM cheat code IDDQD would bypass the CAPTCHA, Miquel decided to add it as a feature. If you install the desktop version, you can type in IDDQD to skip the entire thing. (Fun fact: most CAPTCHAs do not include a “skip” button, because it’s not great for security.)

If you want, you can grab the code for yourself, which will give you the power to change how many enemies you have to shoot in order to pass the test. At that point, though, you might as well just boot up DOOM.

You can give the DOOM CAPTCHA a try on Miquel’s website, but say goodbye to your productivity. Don’t say we didn’t warn you.

And then Samus Aran from Metroid took out her ponytail and Mother Brain said “wow you are pretty with your hair down!!!” and Samus blushed so hard that her whole face turned red and Mother Brian said “oh no are you dying of asphyxiation? I know that’s a thing for people in space sometimes” and then Samus kissed Mother Brain on the brain-cheek and

Get out of here, robot! Shoo!