ZemaGames
Home Game Releases Random: N64 Sleuths Are Trying To Figure Out What Game This Old... 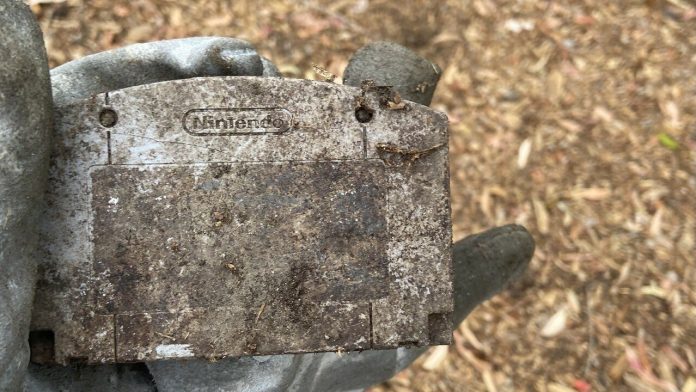 We thought the GameStop stock saga couldn’t get any weirder, but the latest drama in the dedicated subreddit is… trying to find out the identity of a dirty N64 cartridge.

Reddit user salemxbanks was picking up trash in a local park (what a sweetie) when they stumbled across an old, rusty, dirt-encrusted game cartridge, with no discernible title. Putting aside the question of “who leaves an N64 game in a park” and “is this evidence from a video game-related murder that should be turned into the police”, we can’t help but wonder if there’s a chance it still works, or at the very least, if it can be saved.

Unfortunately, it might be a little difficult to figure out what game is (or used to be) stored on the cartridge — salemxbanks attempted to clean off the label, only to find that it had long since been removed — either by weather or anti-game squirrels, no doubt. All that remained was “a little piece that looks blue which fades to a creme color”, and that’s not much to go on. There is a glimmer of hope, though: salemxbanks is going to send the cartridge to a friend who collects N64 games, so maybe they can help.

But for now, it’s up to you, dear readers! Take a closer look at that grubby plastic — if anyone’s going to solve the mystery, it’s the kind of people who read a Nintendo-focused website, right? Let us know your theories in the comments.