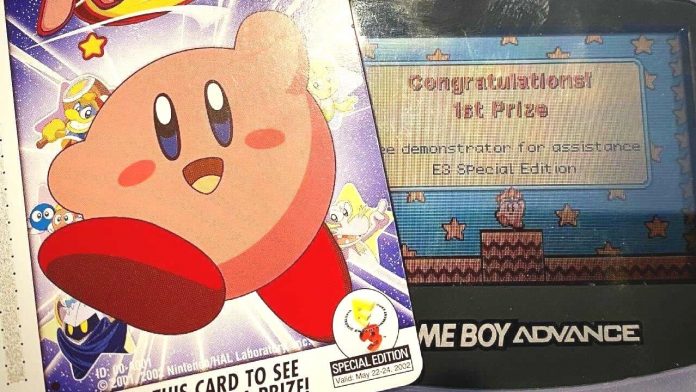 Mr Anderson has updated us on the latest around this incredibly rare e-Reader card, confirming that it now has an eBay listing for any eager – and maybe rather wealthy – collectors that want to give it a good home. A couple of early bids – at the time of writing – have already hit the $1000USD mark, so it’s definitely one for the most serious of collectors.

There’s also a video of the card in action, below, showing that it is indeed a winner from E3 2002!

Over the years there have been many rare game-related cards produced by Nintendo and its partner companies. Whether we’re talking about amiibo cards (the Sanrio X Animal Crossing crossover cards were trading hands for silly money recently) or a host of physical Pokémon TCG cards, they always seem to be in high demand, with certain cards becoming collector’s items almost instantly.

There’s another breed of card, though, that is genuinely, incredibly rare; one-time productions that have long since been discontinued and won’t be getting a reprint. This story concerns perhaps one of the very rarest: a winning Special Edition Kirby e-Reader promo card produced as part of a pack exclusively for industry show goers at E3 2002. And Nintendo Life reader @robertjanderson has apparently found one!

He contacted Nintendo Life about the recent discovery and appears to be in possession of a fully-functioning — and winning — card, as you can see via the image below:

The winning card (only valid to redeem from 22-24 May 2002) appears to have survived redemption and the following nineteen years in fine condition. Why don’t we have a super-rare, incredibly valuable card or three lying around the house, eh?

Three versions of this card were produced for E3 2002 — an industry-only event at the time, remember — with ‘no prize’, ‘second prize’ and ‘first prize’ variants which went into blind promo packs including Pokémon and Game & Watch cards. Using a GBA and e-Reader to scan them at the show, winning cards could then be exchanged for prizes, although we’re not sure exactly what the prizes were — we’ve heard rumour that a GBA Pokémon Gold NYC Edition may have been top prize, though. Not too shabby, certainly, although we’d wager it would be much cheaper to pick up one of those consoles these days than one of these Kirby cards, and a winning example, no less!

Not only were a very small batch of these cards ever produced (100 second-prize cards, and just ten ‘winners’, apparently), but any card exchanged for a prize was promptly torn up by Nintendo reps to prevent double redemptions — which explains the extreme rarity.

E3 2002 promotional Kirby e-Reader cards were distributed on the E3 showfloor. Each card was printed in 3 variants – no prize, 2nd prize, and 1st prize. Scanning the card would result in confirmation if you’ve won a prize or not. All winning cards were later destroyed. pic.twitter.com/w06lyeIpNa— Kirby: Star Facts (@FactsKirby) February 27, 2019

Various promotional cards were made for the Game Boy Advance’s short-lived e-Reader accessory in the early-2000s, but as a small batch of single-event cards, this winning example has a decent claim to being one of the very rarest pieces of Nintendo ephemera in existence.

Do you know of any other examples of winning Kirby cards that escaped destruction at the hands of Nintendo reps on the E3 2002 show floor? Got a couple knocking around in the bottom of a drawer, have you? Or do you have one of the prizes that were on offer? Feel free to let us know and make us incandescent with jealousy below.