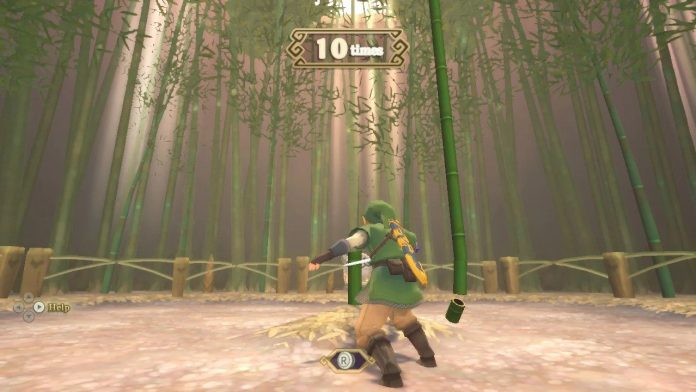 Many people, ourselves included, thought that Skyward Sword would never come to a non-Wii console because it would mess up the controls. We were wrong, but also, we were a little bit right, too.

The new Switch version of Skyward Sword came out last week (we quite liked it) with some updated controls for players who don’t fancy swinging their arms around their living rooms. You can now use the sticks to swing your sword, thank goodness, and that comes with a few minor gameplay changes, the most important of which is ‘Clean Cut’, the bamboo minigame.

The minigame is located on one of the small islands around Skyloft, and it’s an absolute bastard. The idea is that you have to slice this big stalk of bamboo at least 28 times, and if the bamboo hits the ground, it’s over — so your slices have to be very perfectly horizontal, which was quite difficult with the Wiimote.

Cutting the bamboo at least 28 times will net you rare materials: a Blue Bird Feather, a Goddess Plume, or a Golden Skull, each of which can be used to upgrade items. It’s not super difficult to get 28, but it may or may not have involved accidentally knocking things off shelves and punching your little brother in the face with the controller.

Now that players can use the sticks, though, the bamboo minigame has been declawed. One player on Reddit achieved 46 strokes by flicking the stick back and forth, while being careful not to accidentally trigger a spin attack. With each of the rare materials selling for 100 rupees, it’s a neat way to amass a tidy sum in a relatively short time.

Oh, and if you want to know how to beat every dang minigame in Skyward Sword, we’ve got a guide for that!

But tell us: what’s your Personal Best at Clean Cut? Let us know in the comments!