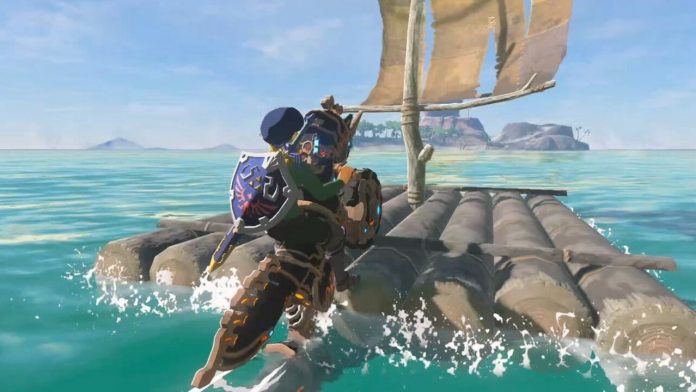 Anyone who’s ever played Zelda. Breath of the Wild will surely have noticed the various rafts sitting on shorelines around the kingdom of Hyrule. Personally, we never spent much time with them — too slow for our tastes — but it was entirely possible to navigate across the water using a Korok leaf to propel yourself and your vessel.

Well, things just got a bit easier, or at least faster. Twitter user Aycellin has discovered that by dipping the back wheel of the Master Cycle Zero off the back of a raft, you can turn your bike into a makeshift amphibious vehicle and speed across the water in no time.

Now our French is just about good enough to order a coffee and croissant at a Parisian cafe (while eliciting withering looks from the waiter, it should be said), so the original tweet showing the ‘motorboat’ proved a little beyond our abilities to translate. Fortunately, the included ‘instructional’ video makes things pretty clear, but using the magical powers of Twitter’s in-built Google-powered translation tool, we were able to decipher exactly what Aycellin is saying:

I add an engine to the raft in #ZeldaBreathoftheWild I’ll explain the procedure to you. Basically I just wanted to take my motorcycle on vacation, but I quickly found a tip provided by the developers it looks like to motorized this small boat.#zelda#zeldabotw#astuce 2021

As you can see, with some careful manoeuvring of your Master Cycle Zero, you’re able to turn any old raft into a proper boat with an onboard motor(bike). Handily, no mods were employed here, meaning you too can go boating with your copy of the game — assuming you’ve completed the DLC and got the bike, of course.

This is just the latest in a very long line of cool things that’s been discovered in ‘the game that keeps on giving’. We recently found out you can ride on barrels, and all manner of glitches have been discovered enabling you to ‘break’ the game in fascinating ways.

Let us know below if you’ve had success turning your common or garden variety raft into a speedboat.