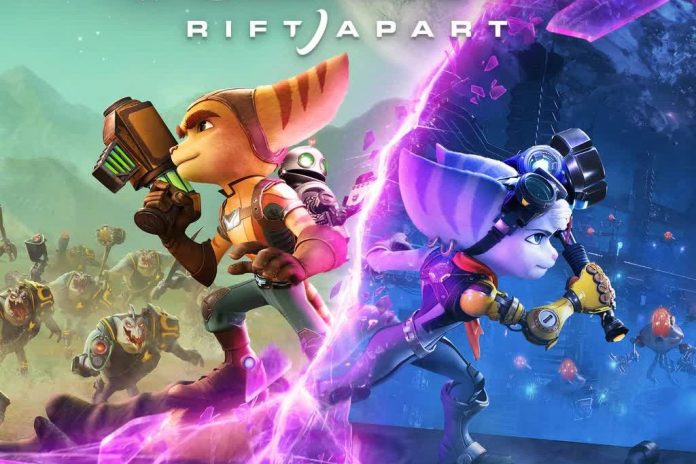 Ratchet and Clank: Rift Apart is one of the best entries in the series yet, with gripping chaotic shootouts, exhilarating platforming, and a charming story. Thanks to the extra firepower of the PS5 there are lots of next-gen upgrades to enjoy too, from the jaw-dropping 4K visuals to the immersive DualSense feedback. This is a must-buy for PS5 owners.

Ratchet and Clank: Rift Apart is a series high for PlayStation’s guardians of the galaxy, with more gripping shootouts than ever before and an endearing Pixar-esque story that will have you grinning right to the end.

Those who enjoyed the 2016 remake on PS4 will no doubt love Rift Apart, with Insomniac Games expanding on established foundations rather than making any sweeping changes. There have been a couple of new additions such as the introduction of pocket universes and portal jumping, but the core gameplay loop remains untouched: shoot enemies, hoover-up bolts, purchase new guns, repeat.

But Rift Apart isn’t merely a rinse-and-repeat job of previous Ratchet and Clank entries. It’s arguably the best showcase for the PS5 yet, with jaw-dropping next-gen visuals, unique DualSense feedback for every single weapon, and technical marvels thanks to the wickedly speedy SSD. If you’re looking for a true next-gen experience, then Rift Apart is the best PS5 game you can buy right now.

Ratchet and Clank: Rift Apart looks and feels like a Pixar movie. The visuals are outstanding as a result of the power of the PS5, with seamless transitions between cut-scenes and in-game action. Set to Fidelity mode, the game benefits from a super-sharp 4K resolution, while ray tracing support allows the likes of Clank’s body and towering, metallic structures to shine with dazzling detail. Rift Apart is one of the best-looking games I’ve played yet.

You’ve also the option of selecting a Performance mode, which boosts the frame rate from 30fps to 60fps for smoother visuals, but at the cost of the graphics quality. I personally preferred the Fidelity mode, but it’s still great to have the choice.

The outstanding writing made me fall in love with the (approximately) 14-hour story. Characters have surprising depth for a game that revolves around a gun-toting fuzzball, while a countless stream of jokes saw me laughing throughout, featuring both slapstick humour that children can enjoy and cheeky winks to more mature players.

The story is admittedly simplistic, with plenty of predictable twists, as Dr Nefarious opens up a portal to a parallel dimension where he has a better chance of taking over the universe. But it’s the hugely entertaining cast of characters that kept me engaged throughout, with Insomniac Games taking up the opportunity to introduce Rivet and a number of ‘alternate-reality’ friends and foes.

Rivet is a new playable character who assumes just as much of a lead role as the titular duo. While she is technically a parallel version of Ratchet, Insomniac has made sure to give her a distinctive personality rather than making her a mere female clone.

Since she’s lived in a more oppressed universe than Ratchet, she’s more cynical and less trustworthy, especially when it comes to robots. Despite her hardened exterior, Rivet remains very likeable, frequently chiming in with amusing digs and retorts with her various companions.

Dr Nefarious and his even more dastardly doppelganger also make up a terrific double-act. They don’t have the threatening presence of some of gaming’s greatest villains, but I always looked forward to their over-the-top performances in cutscenes.

As a big fan of the Ratchet and Clank series, I was relieved to see that Insomniac has kept the core gameplay mechanics intact. You begin your adventure with just a wrench and a simple plasma shooter, but throughout the game you’ll be able to spend ‘bolts’ on unlocking various zany weaponry.

There’s oodles of variety here, from a Topiary Sprinkler that slows down foes by coating them in weeds, to the ultra-powerful Negatron Collider that fires out a pulverising energy beam. And every single one of them was a joy to use.

With enemy combat encounters often involving waves of infantry, and ammunition generally sparse, I was encouraged to make use of my full arsenal of weaponry rather than just relying on a single, overpowered blaster. Every gun has a scenario-specific use-case, too, with grenades ideal for wiping clustered hordes and a sci-fi sniper handy for knocking jetpack-equipped grunts out of the sky.

For Rift Apart, Insomniac Games has cranked up the immersion by implementing unique DualSense feedback for every gun, whilst also adding secondary functions to the adaptive triggers. By pressing lightly on the trigger, the shotgun-esque Enforcer will only fire out of one barrel to save ammunition. Pull the trigger down all the way though and you’ll fire out of both barrels for more explosive damage. Some of these secondary functions weren’t always as effective as I’d have liked, but they did a fantastic job of heightening the immersion for combat.

The enemy behaviour has also been improved to make encounters feel more dynamic. Foes will cackle when they hit you with a plasma blast, fall backwards when struck with your wrench and even scream out the name of your gun in terror as you pull it from its holster. It all helps to give the impression that you’re playing through an animated movie, rather than just causing havoc in a shooting gallery.

Rift Apart also features a new Phantom Dash ability, improving your mobility across the battle arena. This makes it very easy to dodge an incoming projectile, but battlefields can become so crowded and chaotic that I never felt complacent.

I adored the fast-paced combat in Rift Apart, with a well-executed difficulty curve to accompany your growing arsenal. However, the second-half of the game wasn’t quite as enjoyable as the first, with recycled boss battles and a slower stream of new weapons dulling the charm.

I also found the process of upgrading weapons to be a bit of a chore, as you can spend Raritanium on various buffs via various upgrade trees. There are a lot of minor upgrades on offer, making it a bit of a slog to help your guns reach their max potential, and since upgrading is such a gradual process I was often underwhelmed when seeing a gun in its final form.

While the shootouts are top-drawer, Rift Apart would feel repetitive quickly if it relied solely on combat. Fortunately, Insomniac Games has added a variety of additional gameplay elements to keep it fresh and engaging throughout.

Platforming doesn’t require any tight controls like Super Mario Odyssey, but instead offers a breadth of cinematic escapades where timing is key. Ratchet and Rivet are often required to grind down a metal rail, wall-run across on the side of a vertical platform, and then swing across a chasm all in one seamless, breath-taking stunt – even Nathan Drake would be impressed.

In addition, each of the explorable planets usually centres around one specific mechanic to keep things feeling fresh. The open-world layout of Savali made it a great playground for speeding around in the hover boots, while the ruins of another planet require the gravity boots for some topsy-turvy platforming.

There’s an abundance of pocket-universe areas to explore, too, which are essentially mini-platforming challenges that treat you with a rare collectible upon completion. These pocket universes are spread across the various levels and can be hopped into without having to suffer a loading screen.

I also have to give a special mention to the wondrous utilisation of the PS5’s SSD here, since Rift Apart not only shuns loading screens and makes respawns instantaneous, it also enables innovative features such as travelling between dimensions in the middle of a boss encounter. Insomniac Games has implemented some really cool ideas here, which simply wouldn’t have been possible if this game was also available on PS4.

Adding to the platforming, there are also some Clank-centric puzzles and virus blasting mini-games scattered throughout Rift Apart to punctuate the pace and add some entertaining variety to the gameplay. Both mini-games were pretty formulaic, but were used sparingly enough that I always looked forward to completing another challenge.

Furthermore, Rift Apart also features an excellent Photo mode, challenging arena battles and various collectibles that can unlock cool optional ‘cheats’ inspired by the PS2 era. It won’t take you too long to see and do absolutely everything that’s on offer here, but I’m confident this will be a very fun game to platinum. Plus, a Challenge mode can be activated after you hit the credits, so you can carry over your weapons to a new save file to make repeated playthroughs even more enjoyable.

Ratchet and Clank: Rift Apart is arguably the very best entry in the series so far, with the main gameplay keeping to the original blueprint, but strengthened with additions such as the Phantom Dash move and portal-hopping platforming.

It makes great use of the PS5’s hardware too, with the 4K ray tracing visuals offering gorgeous detail, and the super-fast SSD allowing for innovative features that simply wouldn’t have been possible with a PS4. And then there’s the DualSense feedback, providing heightened immersion for your awe-inspiring arsenal of weapons.

It’s the charming Pixar-esque story that will most likely make the greatest impression though, with Ratchet and Clank proving to be as likeable as ever, Dr Nefarious providing plenty of laugh-inducing gags, and Rivet driving the story with an engaging character arc.

Rift Apart is unquestionably one of the best PS5 games available right now, and should appeal to both series newcomers and those who’ve followed the duo since their PS2 heyday.

Should you buy it?

You didn’t enjoy previous Ratchet and Clank games
Rift Apart feels very similar to older games in the series, just with a couple of innovative upgrades. If you disliked previous entries, then it’s highly likely you won’t enjoy this outing either.

Ratchet and Clank: Rift Apart is one of the best entries in the series yet, with gripping chaotic shootouts, exhilarating platforming, and a charming story. Thanks to the extra firepower of the PS5 there are lots of next-gen upgrades to enjoy, too, from the jaw-dropping 4K visuals to the immersive DualSense feedback. This is a must-buy for PS5 owners.

What is Rift Apart a sequel to?

Rift Apart follows the events of Into the Nexus, albeit many years later. However, you don’t need to have played the previous entries to be able to follow the story easily.

Can you play Rift Apart on PS4?

No, Rift Apart is a PS5 exclusive and is unlikely to ever come to PS4 since it requires the power of the next-gen SSDs for numerous features.

No. Despite featuring two playable characters, Rift Apart does not have any multiplayer, including co-op.