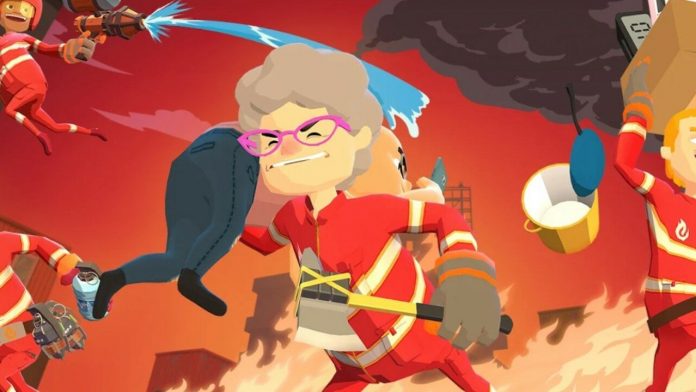 In the line of fire.

At first blush Muse Games’ Embr put us in mind of riotous slapstick comedy titles such as Overcooked and Tarsier Games’ excellent The Stretchers. This is a bright and colourful multiplayer-focused mess of firefighting carnage that also presents itself as a wry satirical take on the state of 21st Century capitalism. It’s got the wonky physics, silly voice-acting, ridiculous stage layouts and upgrades that scream “this is all going to be a lot of over the top fun!” However, in reality it’s all a bit of a damp squib.

The first thing we should mention about this Switch port of Embr is that we could not, over six full days of trying, find more than precisely two online games to join, both of which only had one other player in their lobby. Yes, you can arrange to play four player with a few Switch-owning friends — there is no splitscreen local multiplayer here — but the most immediate and easy option for finding other people to party up with in Embr is, judging by our experience, an absolute bust. Both the PC and Xbox versions (and we’re assuming the Stadia version) support cross platform play, but the Switch version is missing this feature and it hurts the experience big time.