ZemaGames
Home Playstation Shenmue 3 Review: Has it been worth the wait? 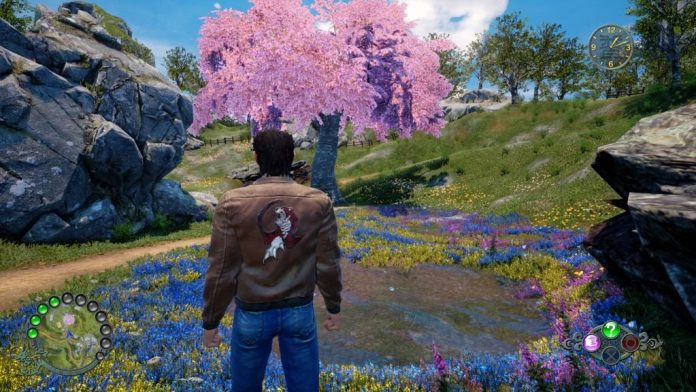 Shenmue 3 would have been well received in 2003, but we’re 18 years on from the last entry and Shenmue hasn’t budged an inch. If you weld your nostalgia goggles to your face, you’ll be able to slog through the story, but it really is a chore. Poor game design and a complete lack of innovation are the killers, but even the continuation of the story is a meagre offering thanks to ludicrous levels of padding.

A threequel nearly two decades in the making, Shenmue 3 once seemed like an impossible dream. Now it’s here… well, nightmare would be hyperbolic, but it’s certainly a disappointment. If you’ve had your nostalgia goggles surgically implanted into your face and you’re just looking for a continuation of the story, then Shenmue 3 will scratch that 18-year itch. But if you’re looking for a good video game then I’ve got bad news for you.

The story picks up right where Shenmue 2 left off, with Ryo and Shenhua in Bailu village. From here, you must investigate the kidnapping of Shenhua’s father and seek out clues to his whereabouts. As with previous titles, the story advances at an utterly glacial pace thanks to its constant goal-post moving. It’s not so much that your princess is in another castle, and more that she’s been to about 400 castles on the way and left you a breadcrumb trail to follow.

This leads into the classic Shenmue experience of talking to random NPCs until you find the one who will advance the plot. This is where Shenmue 3 falls at the first hurdle. The series’ almost legendarily terrible voice acting has been supplanted with something much worse – merely below-average voice acting. Ryo and Shenhua’s returning voice actors are the worst, while the rest of the cast offer spirited attempts to save the material they’re working with. At least in previous titles the voice acting was entertainingly awful, here it’s just sub-par.

But even the best voice actors in the world couldn’t save the atrocious dialogue in play. It’s a Japanese game, made by a small Japanese team, so you have to allow some leeway for imperfect translations and cultural differences, but, even so, the writing is shocking. Characters take forever to say nothing – there are entire conversations that could be condensed into a single sentence. Ryo himself is the worst culprit – 90% of his dialogue is just repeating what someone else just said back at them with a question mark on the end.

NPC: “The monks have trained here for centuries.”

Ryo: “Did you say centuries?”

It’s just so bloody tedious and leads to a phenomenally slow pace as you trudge through endless streams of poorly written and woefully delivered dialogue. But that’s not even the worst thing about the dialogue. You see, every line of dialogue – every single line – takes place within a cutscene. So, if Ryo and Shenhua are walking down the path towards the village and someone needs to say something, you get warped into the cutscene dimension. Every. Single. Time. Did I mention that this game is 90% people talking? It’s infuriating.

When you’re not talking to NPCs and being pulled into the shadow realm, Shenmue 3’s other main draw is the combat. Ryo is often tasked with defeating thugs or sparring with kung fu masters to advance the plot. It’s a basic but functional combat system based on combos learned from skill books. You can input combos manually or cycle through moves to be automatically triggered by the R2 button, rendering the entire system pointless but making it more accessible. Fights usually come down to spamming the same combo at foes and hoping they aren’t blocking. You can also train at the dojo to increase Ryo’s health and to improve his damage output. 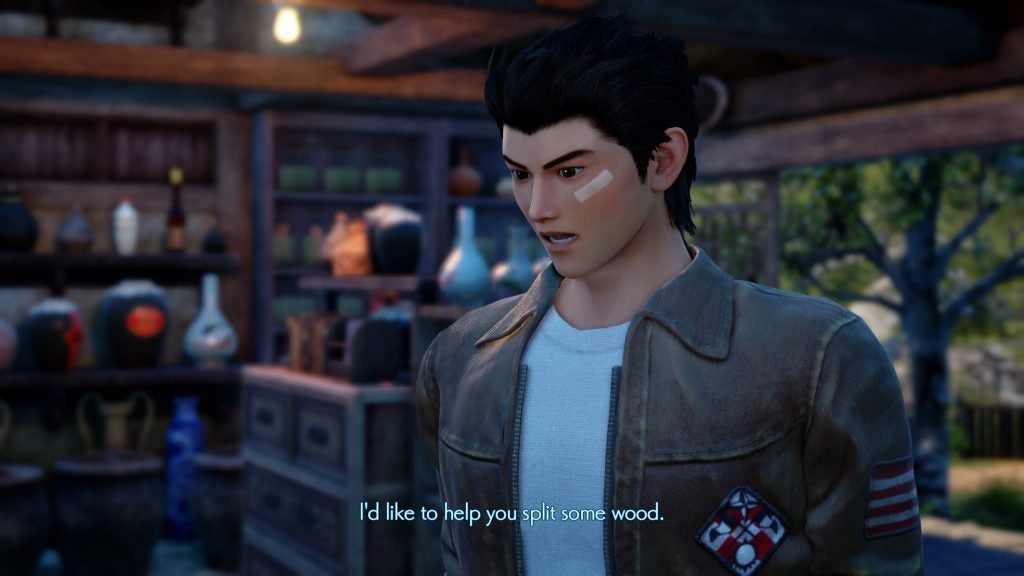 Training takes the form of incredibly basic mini games such as Horse Stance, which is basically a slow, easy, upside-down Flappy Bird. Incidentally, I tried doing Horse Stance in real life and managed about 10 seconds, so fair play to Ryo on some incredible thigh strength. Training can be a little tedious, but you get the sense that’s the point – you’re taking the slow path through the montage and when you’ve levelled up enough to beat whichever goon was giving you trouble, the victory will feel all the sweeter for your effort.

All the usual trappings that Shenmue made its name with are here too. The inexorable advance of time returns, and you’re often forced to wait until the next day to progress the story, which means heading home to bed. You also need to eat to keep your health up as it drains throughout the day, though Shenmue 3 takes the Skyrim approach to food and you’ll need to eat about 40 raw carrots before Ryo is sated. Your health is tied to your stamina too, so you can’t sprint if your health is too low – this can be rage-inducing when you get stuck hobbling your way to the nearest food stand to find a cabbage to scarf down so you can run home.

You’ll also need to pick up a part-time job if you’re going to be able to afford all those raw carrots. There are a variety of activities to choose from, from chopping wood to collecting herbs and fishing. All of these take the form of simple mini games which you’ll need to grind through if you want to buy new moves, food, and even pay your hotel fees later in the game. The iconic forklift driving job also makes a return in the second area in what is probably the highlight of Shenmue 3’s offerings. There’s just something bizarrely cathartic about moving boxes around a warehouse. 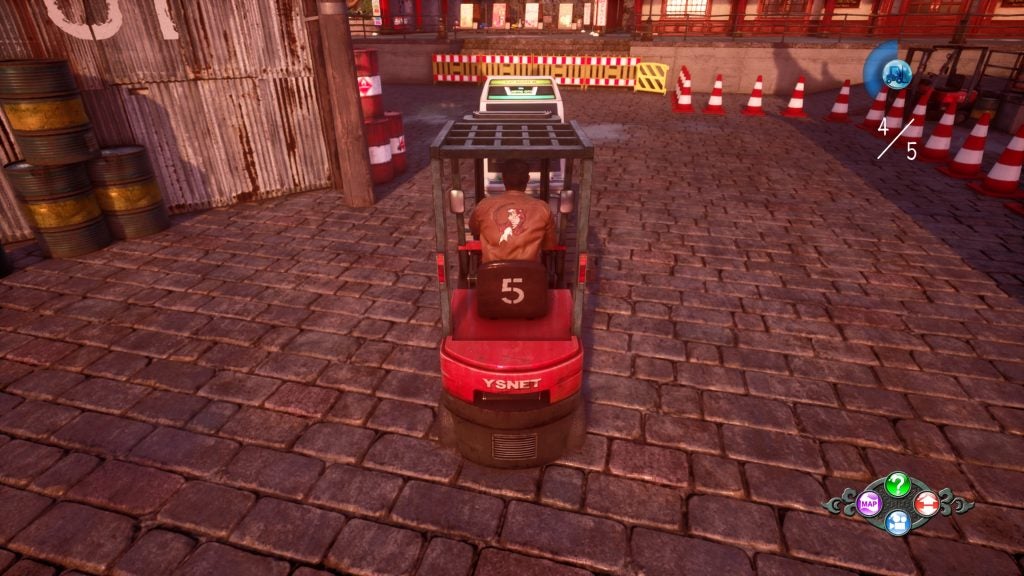 Quick-time events are also scattered throughout your playthrough and they manage to be both infuriatingly difficult and stupidly easy all at once. Call me a crotchety old man with the reflexes of a dead sloth if you want, but I found it almost impossible to hit the QTEs in the brief window before they disappeared. But there’s no consequence for failing them, since the sequence immediately resets and the QTE prompts never change, so you just learn the sequence rather than reacting unless you have the reactions of the Karate Kid. To be fair to Shenmue 3, failing all its QTEs did provide some fantastic slapstick humour and seeing Ryo get beaned with a fire extinguisher gave me a laughing fit.

The story itself advances at an absolute snail’s pace – it took me over 20hrs to finish Shenmue 3 and maybe three things of note happened during that entire time. Every task is so circuitous, so drawn out and padded. You need to find something, so you ask around and someone directs you to someone else that knows about it. Repeat in a chain for another four or five people before you finally find the person who can help you. Also, half of the people in this chain won’t help until you do some tiresome task for them.

As a result of this excessive padding, Shenmue 3’s pacing is a shambles. At one point I had to rescue some dude who was being held hostage by a bunch of thugs, but since I couldn’t beat their leader, I had to learn a new technique from a martial arts master. Of course, the old grouch wouldn’t teach it to me until I did a bunch of nonsense for him to prove my worth. That’s fine, proving yourself to grumpy old masters is martial arts story 101. But the kidnapped dude who was ostensibly in mortal danger was stuck there for like a week in game time while I ran around catching chickens. 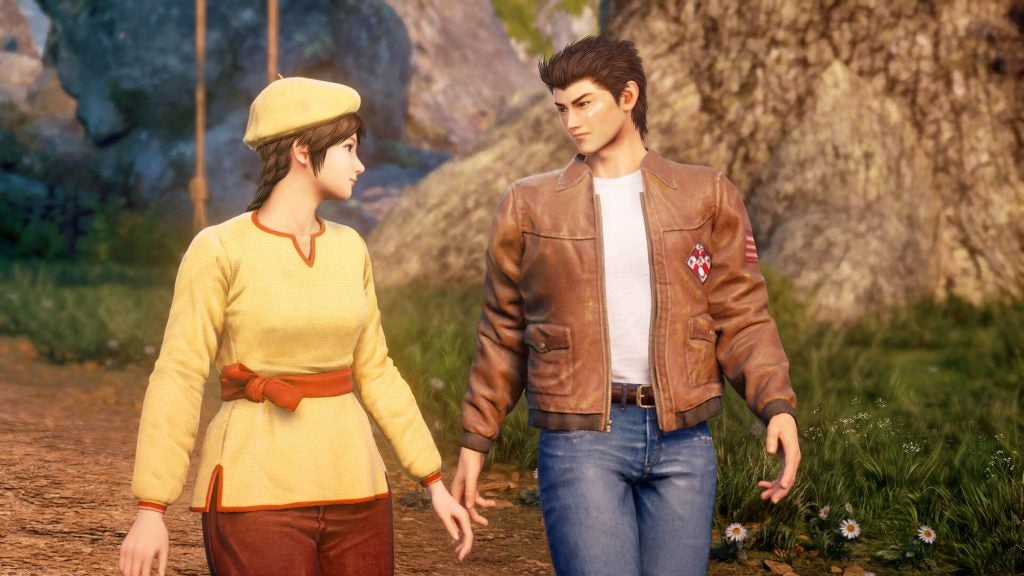 Beloved character are back with laughably charming voice-acting in tow

All of these issues, every single thing I’ve just moaned about, were present in the original Shenmue. The difference is that we forgave Shenmue its failings back then because it was an innovator. Shenmue broke new ground and laid the foundations for a lot of gaming’s current staples, so we didn’t mind that it had horrendous dialogue, shoddy voice acting, and a plot that went nowhere. Shenmue 3 is not an innovator; it wallows in nostalgia.

Shenmue 3 hasn’t advanced a single inch from the original game. And the truth is that this review is largely pointless: if you’re at all interested in Shenmue 3, it’s because you played the originals and, in that case, nostalgia will probably carry you through the way it carried me through. I’m glad I played it, I’m happy to see the story of Ryo Hazuki continue and I’ll probably play the planned Shenmue 4, 5 and 6 if series director Yu Suzuki gets his way. But Shenmue 3 is a bad video game and it’s important we recognise that. It’s OK to like bad things sometimes.

Should you buy Shenmue 3?

Shenmue 3 would have been well received in 2003, but we’re 18 years on from the last entry and Shenmue hasn’t budged an inch. If you weld your nostalgia goggles to your face, you’ll be able to slog through the story, but it really is a chore. Poor game design and a complete lack of innovation are the killers, but even the continuation of the story is a meagre offering thanks to ludicrous levels of padding.