ZemaGames
Home Game Releases Sky: Children Of The Light Is Now Available For Free On Switch... 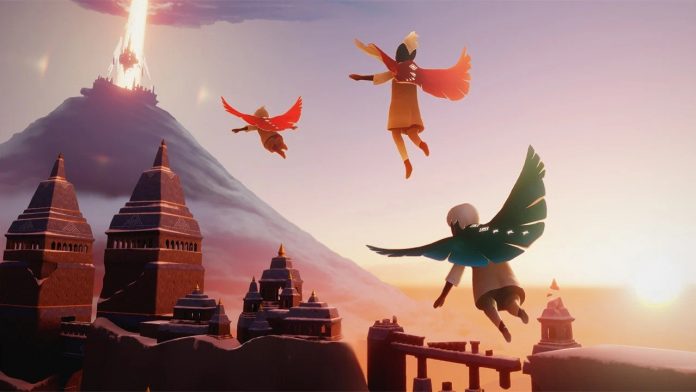 The team at thatgamecompany is renowned by many console players for PlayStation titles like Flower and Journey, but since setting out on their own they’ve been making a mark on smart devices with Sky: Children of the Light. It’s now available to download on the Switch eShop, and it’s free-to-play with a decent amount of content to get you started at no cost.

The Switch version includes a “free main story arc and offers up the ability for eight players to explore and play socially at any one time”, though as it’s free-to-play there are paid options for more content. For Switch owners there’ll be a Starter Pack at £28.99 (with regional variations), which includes “two new capes, a vessel flute, new hairstyle, 75 candles and an extra surprise”. Pleasingly, whether you’re planning to just try out the free content or pay for more there’ll be cross-play with Apple and Android players; mobile players will also be able to carry progress across to the Switch port.

It’s pitched very much as a friendly co-operative game, as outlined in the PR excerpt below.

Originally launched in July 2019 on iOS and in April 2020 on Android, players arrive in Sky as a child of light to unravel mysteries of the desolate kingdom, and return the fallen stars back to their constellations. Players can explore seven dreamlike realms with like-minded friends, where they can fly, hold hands and collaborate together around the world. With compassion, friendship and altruism as central elements of Sky, the game’s innovative experience has drawn both critical acclaim and awards. Since its debut, the game has been honored with Apple’s 2019 iPhone Game of the Year and Apple’s 2020 Design Award, as well as wins at the SXSW Awards 2020, the Game Developers Choice Awards 2020, The Webby Awards 2020 and 2021, Google Play Store’s Best Indie Games of 2020 as well as other awards.

The next ‘season’ starts on 6th July and will have a tie-in with Le Petit Prince (The Little Prince), which will have story set in a new “Starlight Desert” area.