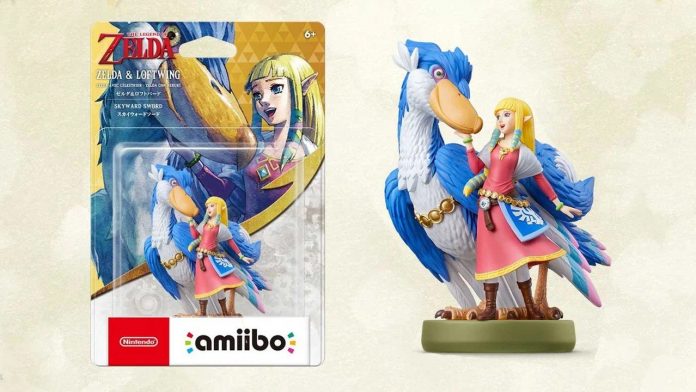 This week Nintendo unveiled a particularly charming amiibo that’ll tie in to The Legend of Zelda: Skyward Sword HD, and it’s arguably one of the most handsome figures yet. It’s also caused a bit of a storm on social media and in comments sections here on the site, with plenty of vitriol to go around. The source of the argument is simple – a quality of life (QoL) feature will seemingly only be available by scanning this particular amiibo. Rather than relying on heading to a save statue or jumping on a Loftwing to transition from the skies to the ground and vice versa, the figure will save you a little time and hassle by allowing you to transport at will.

The reaction has certainly been quite tasty; varied viewpoints are understandable, but the passion behind many of the views expressed has perhaps been surprising. It’s hard to disagree that it’s naughty in this day and age to lock a feature behind a collectible figurine, but then the counterpoint is simple – that’s what amiibo do, haven’t you noticed?

The strange thing is that this is not particularly close to being Nintendo’s most cynical application of the amiibo NFC technology. In the earlier years of the range there were entire games centred around the figures — who remembers Animal Crossing: amiibo Festival? — and the hard-to-find Wolf Link literally locked away a whole challenge dungeon in The Legend of Zelda: Twilight Princess HD; if you couldn’t get one of the bundle copies at the time, tough luck. In the original Splatoon the figures were needed to access specific challenge missions (and related gear), so there have been examples where on-disc gameplay content has been locked behind scanning a toy.

Perhaps some of the outrage is that people have partly forgotten that this is the role of amiibo. In the Switch era the range has primarily been used for Super Smash Bros., and figures like those for Super Mario Odyssey gave ways to find extra help and hidden items. A lot of the amiibo figures have relatively little impact on the game so that missing out isn’t necessarily a big deal. Some gamers will collect them all, others (like this writer) only those they actually want to put on a shelf. Plenty won’t buy any at all.

So, what’s behind the continued antipathy to amiibo, and why has some of the reaction to the Skyward Sword HD been so impassioned? We’ve seen varied arguments, and some are valid. One perspective is that — considering the precedent set by rival companies — full retail price for an HD remaster / re-release is rather steep; you add the pricey amiibo on top of that and things start getting downright expensive.

Others simply point out that they feel the original design choice of traveling from save points isn’t a good one, and improving it exclusively in an expensive add-on isn’t acceptable. We’ve also seen an argument that Nintendo gets ‘free passes’ for high prices and cynical products, and some have decided to draw a virtual line in the sand at this particular example.

Nintendo has always aggressively defended the value of its products, which is a business attitude very prominent in Japan particularly

In terms of the price of the remaster, you can undoubtedly argue both ways. Nintendo has always aggressively defended the value of its products, which is a business attitude very prominent in Japan particularly. That said, porting a Wii game to HD will have certainly been much more work than the numerous Wii U ports; some of those Wii U re-releases have definitely been cheekily priced, but transitioning an SD-era Wii title will have required some work and effort.

As for the argument of Nintendo getting ‘free passes’ where other companies wouldn’t, that’s one that is maybe in the eye of the beholder. Nintendo gets criticised plenty for a number of its products and policies, Nintendo Switch Online being an obvious current example, and being disappointed in something Nintendo does is practically a lifestyle. This writer doesn’t agree the company gets ‘free passes’ all the time, but if you feel that way then that’s your right, of course.

But the feature locked behind an amiibo point is interesting. As we said right at the top, that is basically what amiibo and ‘toys-to-life’ is. Even recently Nintendo got some heat for the relative scarcity of the Sanrio Animal Crossing cards (which give you characters, clothes and items), though at least that only needed one purchase rather than the blind packs from previous AC card ranges. That’s how the product fundamentally works – they’re optional extras with optional content, and whether particular amiibo or content are desirable enough to buy is up to you. It’s physical DLC, plain and simple.

The antipathy some have for amiibo has been there from day one, simply as an aversion to the concept. Perhaps it’s accentuated now as it’s the last ‘toys-to-life’ brand in town. Through a mix of over-reach and consumer apathy, previous booms like Skylanders and Disney Infinity bit the dust, yet Nintendo’s range lives on. This is likely down to their appeal as collectables as much as in-game content, and the big N also consistently produces inadequate stock that drives FOMO, a well known weapon of many a profitable company.

The ‘Disney Vault’ approach is cynical, it is designed to maximise profit. Well, that’s what Nintendo is there to do for its shareholders, just like Disney, Sony, Microsoft and many others. Its objective is to find the balance between maximising profits and keeping customers happy; sometimes it’ll tip more one way than the other. We don’t have to like it, but it’s the reality.

But is the Skyward Sword HD amiibo figure and related feature some sort of new low, a new level of cynicism? No, frankly, it’s pretty much par for the course. As we’ve highlighted above, Nintendo has done worse in terms of locking content behind little plastic figures or cards.

That’s amiibo, and the reality is that enough people are happy to participate because they like the figure and are willing to pay. At least those that skip on the amiibo aren’t missing out on actual gameplay content; that’s about as good as it gets.

Anyway, see you next time the internet decides to be surprised that amiibo is designed to make a very wealthy company more money.