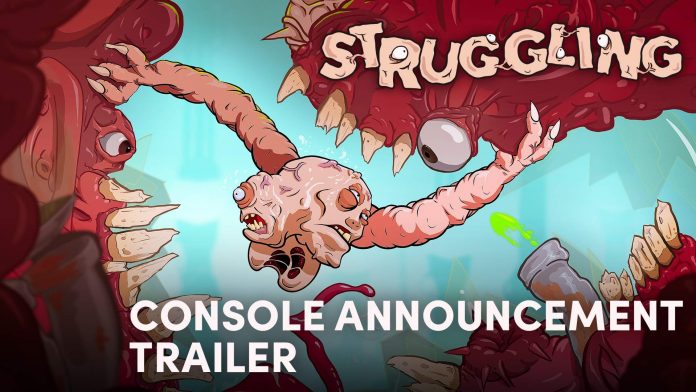 When you experience Struggling for the first time, one word will come to mind: chaos. The soundtrack is all over the place, ranging from dubstep to bluegrass music. Visually speaking, it’s as beautiful as it is disgusting… depending on who you’re asking. The game never takes itself seriously but brings in deep lore and epic scenes, like something out of Shadow of the Colossus. The gameplay is inspired by “rage games” such as Getting Over It with Bennett Foddy, but somehow includes a dating simulator as a boss fight. And yet, everything is calculated, every single random moment, every song that feels oddly out of place has intent behind its existence.  Struggling is an ode to everything that has ever caused you to say “What?” out loud.

Troy, our fleshy protagonist, went through many iterations trying to find its identity. Initially, Struggling’s main character was a plant, dragging itself with its vines to move around the pre-alpha levels. Very early on we figured that this wasn’t the hero that our game needed, we wanted something unique that would leave no one indifferent. The creation of Troy started with two core guidelines; firstly, the character needed to have only two limbs and a head. Secondly, the design of it needed to properly communicate that two players can control it at the same time. An ooze with two floating hearts, a robot controlled by small animals, a kaiju-inspired alien and a fluffy spider monster were but a few of the concepts we had floating around whilst working on what ended up becoming a meatball-looking pile of symbiotic flesh; an abomination.

Since Struggling was our very first game, both as a studio and as developers, we had plenty of ideas we wanted and needed to explore. We wanted to ensure the gameplay, which was intentionally frustrating, remained fresh and engaging, hooking the player back in despite moments of genuine anger. In-house, we called these “exotic moments,” fun and challenging sequences that really changed what you understood about the game. We’ve had, on more than one occasion, people say that Struggling fits into virtually every genre simultaneously and honestly, it’s not that far from the truth. Genres can be very limiting when trying to create a fun experience, we allowed ourselves to step out of that box more than once in order to craft a unique and entertaining game.

One of the very first “exotic” moments you encounter in Struggling is the Amadeus boss fight, an amalgamation of flesh, opera and… pinball. It is one of the most ambitious and unique parts of the game. Up until that point, players will have been painfully crawling from checkpoint to checkpoint in life or death scenarios while exploring the character’s control scheme. So, the only next logical step is to throw them into a fleshy (and quite frankly disturbing) pinball machine that uses gigantic arms instead of flippers. It’s almost as if they had been suffering for the past hour to prepare for this very moment, in which they must now play a completely different game, but using mechanics that are still strikingly similar to maneuvering themselves around with Troy’s oddly inefficient appendages.

No longer in control of Troy’s body, the players need to throw themselves into pus-filled boils while an enormous, disembodied head sings an opera that is synced with the pinball environment. The whole sequence is like a fever dream, it’s our take on what Struggling would be as a pinball game instead of a wacky platformer. We are still personally impressed by how wild and memorable that whole scene is, even when compared to the rest of this game.

A year after Struggling’s initial PC release, we can’t wait to bring this chaotic and beautiful creation to new audiences on Xbox. So settle in, grab a friend and buckle up for a wild ride unlike anything you’ve played before!

Struggling is launching September 8 for Xbox One and Xbox Series X|S.