ZemaGames
Home Game Releases This Ultra-Rare Copy Of The Original NES Zelda Is Already Going For... 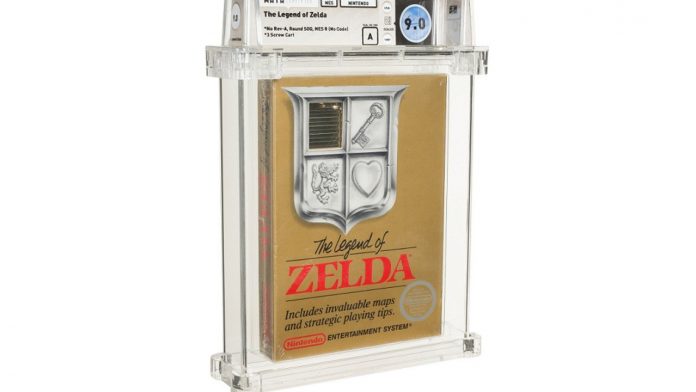 Not so long ago, a super-rare version of Super Mario Bros. sold for $660,000 at auction, and now it’s The Legend of Zelda‘s turn.

Yes, in the crazy world we now live in, people are buying hard-to-find retro game cartridges for insane sums of money. A 1987 copy of the NES classic Zelda – which is a sealed grade nine “Rev-A” early production version produced for only a few months – has already surpassed $110,000 in bids, with five days remaining.

Heritage Auction says it may be the only copy of this particular cartridge it will ever have the opportunity to offer. The only other Legend of Zelda cart that’s rarer than it is the “NES TM” version – which is the “true first production run”. It’s believed there’s only a single sealed copy of this that exists and there’s no saying it would even go on sale.

While many of us might not be able to fork out this much for a copy of the original Legend of Zelda, there’s no need to worry – for much smaller amounts you can always purchase a second-hand copy, or just boot up Nintendo’s NES library on the Switch and play Link’s original outing there.

Heritage Auctions also has a high-grade Nintendo World Championships cart up for grabs, too.

What are your thoughts about spending large amounts of money on video games? Leave a comment down below.