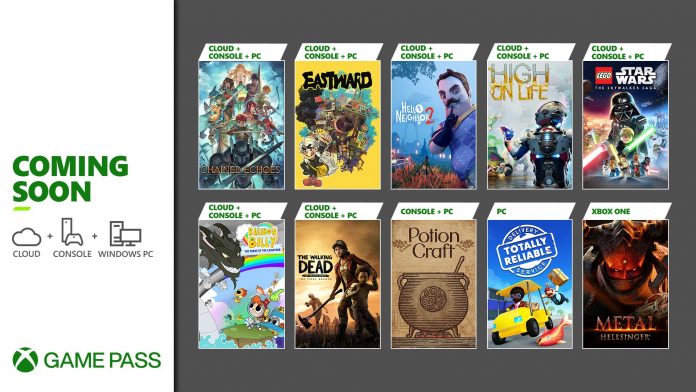 We have games available for you to play today, games “coming soon” (fake but should be real trademark here), and even something you can play now that maybe you didn’t know we slipped in last week! Let’s get to the games.

Eastward (Cloud, Console, and PC)
Welcome to the charming world of Eastward – population declining! Journey through a society on the brink of collapse, discovering delightful towns, strange creatures, and even stranger people! Wield John’s trusty frying pan and Sam’s mystic powers on an unusual adventure into the unknown.

The Walking Dead: The Final Season (Cloud, Console, and PC)
After years on the road facing threats both living and dead, a secluded school might finally be Clementine and AJ’s chance for a home. But protecting it will mean sacrifice. In this gripping, emotional final season, your choices define your relationships, shape your world, and determine how Clementine’s story ends.

Totally Reliable Delivery Service (PC)
Buckle up your back brace and fire up the delivery truck, it’s time to deliver! Join up to three friends and haphazardly get the job done in an interactive sandbox world. Endure cruel ragdoll physics, pilot your favorite vehicle, and complete the tasks at hand to the best of your ability. Delivery attempted, that’s a Totally Reliable Delivery Service guarantee!

LEGO Star Wars: The Skywalker Saga (Cloud, Console, and PC) – December 6
An unforgettable experience through the Star Wars galaxy with the biggest roster of LEGO Star Wars characters and vehicles to date, new immersive combat mechanics, a vast array of planets to explore, and much more! Players will relive the epic narrative of the Skywalker Saga told through the lens of hilarious LEGO humor. Choose the beginning of any trilogy, including Star Wars: The Phantom Menace, Star Wars: A New Hope, or Star Wars: The Force Awakens and start your journey on December 6 for Cloud, Console, and PC.

Hello Neighbor 2 (Cloud, Console, and PC) – December 6
Available on day one with Game Pass: Hello Neighbor 2 is a stealth horror game about uncovering your creepy neighbor’s secrets. Play against a complex opponent controlled by an advanced AI that learns from you and all the other players! As time passes and the Neighbor adapts to the players’ patterns, his own behavior will change and surprise you. Will you be the one to outsmart the Neighbor and find out what he’s hiding?

Chained Echoes (Cloud, Console, and PC) – December 8
Available on day one with Game Pass: Valandis is at war. The three kingdoms have been fighting for centuries. Peace seems to be no option. And yet, a magical weapon of mass destruction leads to a fragile one. One, which won’t last. Prepare yourself for an adventure in a world full of wonders, magic, mechs, charming characters, airships and vicious foes. Will you be able to make peace everlasting with your heroes?

Metal: Hellsinger (Xbox One) – December 8
Game Pass members will be able to jump into Metal: Hellsinger on Xbox One consoles on December 8! Previously released on Cloud, PC, and Xbox Series X|S with Game Pass, Metal: Hellsinger is a rhythm FPS brimming with diabolical enemies, powerful weapons, and metal music. Strike terror into the hearts of demons as you fight your way through eight Hells on an infernal journey to achieve the purest of goals: Vengeance.

High On Life (Cloud, Console, and PC) – December 13
Available on day one with Game Pass: From the mind of Justin Roiland comes High On Life. Humanity is being threatened by an alien cartel who wants to use them as drugs. It’s up to you to rescue and partner with charismatic, talking guns, take down Garmantuous and his gang, and save the world!

Potion Craft (Console and PC) – December 13
Potion Craft is an alchemist simulator where you physically interact with your tools and ingredients to brew potions. You’re in full control of the whole shop: invent new recipes, attract customers and experiment to your heart’s content. Just remember: the whole town is counting on you.

Rainbow Billy: The Curse of the Leviathan (Cloud, Console, and PC) – December 15
A wholesome, creature capture, 2.5D Adventure-Puzzle-Platformer with over 30 hours of gameplay! It is a family-friendly, openly accessible, RPG-infused adventure in which you must save whimsical creatures by bringing back color to the world you once knew!

Battlefield 2042 (Cloud, Console, and PC) EA Play – Available now
PC Game Pass and Ultimate members can now join the fight with EA Play! Battlefield 2042 is a first-person shooter that marks the return to the iconic all-out warfare of the franchise. In a near-future world transformed by disorder, adapt and overcome dynamically changing battlegrounds with the help of your squad and a cutting-edge arsenal. Learn more about Season 03: Escalation here!

Need for Speed Unbound: Early Access Trial with EA Play – Available now
Drivers, start your engines! PC Game Pass and Ultimate members can try Need for Speed Unbound for 10 full hours with EA Play! Race against time, outsmart the cops, and take on weekly qualifiers to reach The Grand, Lakeshore’s ultimate street racing challenge. Pack your garage with precision-tuned, custom rides and light up the streets with your style, exclusive fits, and a vibrant global soundtrack.

Conan Exiles: Chapter 2 – December 6
The online multiplayer survival game set in the savage lands of Conan the Barbarian continues to expand. After the arrival of sorcery in the massive Age of Sorcery Update, Chapter 2 now drops brand-new features and content into the simmering situation in the Exiled Lands. Hunt down sorcerer NPCs across the map and bring them back dead or alive for valuable rewards. Experience the new Witch Hunt Encounter as you explore, taking on several unique boss-level sorcerers.

The following games are leaving the Game Pass library soon which means it is the perfect time to shuffle your play list and hit these before they go! Remember to use your membership discount to save up to 20% to keep any Game Pass games in your library.

Remember that The Game Awards is just around the corner, and that many of the nominees can be played in Game Pass right now (check out our collection on the Xbox Game Pass mobile app)! As always if you want to get into the games with your friends, the first month is only $1, so that’s a very easy game night sorted. We’ll be back with more Game Pass updates soon!

Editor’s Note: “Hot Wheels Unleashed – Game of the Year Edition is no longer coming on Dec 15, 2022 as previously announced. We will update with a new date when we have more information to share.”