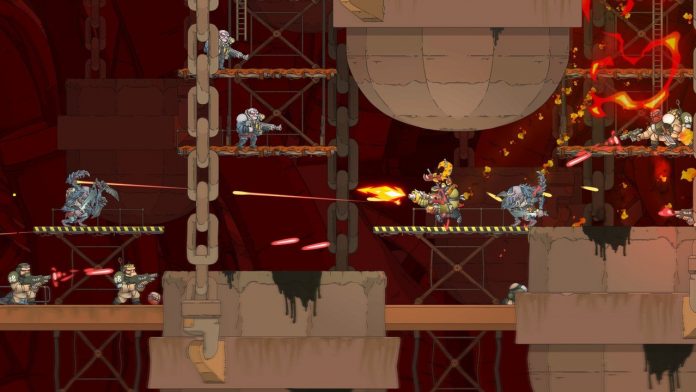 We’re had a number of varied Warhammer titles on Nintendo hardware in recent years, and now we have another one in the Warhammer 40,000 universe – to be precise – on the way to Switch.

The quirkily-named Warhammer 40,000: Shootas, Blood & Teef is a run and gun title due on the eShop (and various other storefronts) in 2022. If the art-style seems familiar in the trailer above that’s because it’s from the same team that brought Guns, Gore & Cannoli and its sequel to Switch. Back then they were known as Crazy Monkey Studios, but has since changed name to Rogueside; the team’s been busy on titles War Party and Hidden Through Time in the past few years.

This Warhammer 40,000 game is certainly a return to those shooter roots, and a bit of the official blurb is below.

Never enough Dakka! Destroy your foes using a great arsenal of weapons and rain destruction down upon them. No one can stand in your way! Massive explosions and flying body parts ain’t never been this fun!

WAAAGH! Feel the emotion and violence build up until it bursts out as a storm of bullets! Violence begets violence as the massive destruction you cause builds up into a full blown unstoppable WAAAGH! Because Orks are made for two things: fighting… and winning!

Orks together strong! Grab your friends and take on the forces of the Astra Militarum, the Genestealer Cults and the Space Marines together. Or you know, bash their head in instead and determine who is the fiercest Ork in the clan!

We think it looks like a lot of fun; let us know what you think in the comments.