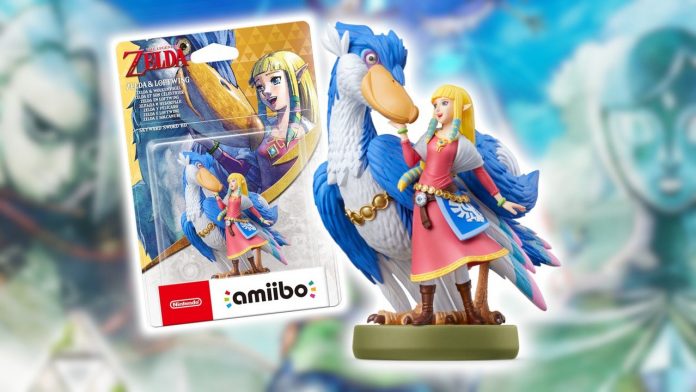 Update: The Nintendo Official UK Store now has pre-orders live for the Zelda Loftwing amiibo priced at £21.99 — cheaper than other retailers. They’re limited to one per customer, so grab ’em while you can!

While Zelda fans the world over wait patiently for more news on the upcoming Breath of the Wild 2, Nintendo is serving up a vintage helping of Zelda action this summer in the form of The Legend of Zelda: Skyward Sword HD.

Landing on the Nintendo Switch on 16th July, the release of this high-def remaster of the original Wii game is accompanied not only by a pair of new Skyward Sword Joy-Con, but also a brand new amiibo featuring Zelda and her Loftwing companion.

Launching on the same day as the game, this Zelda / Loftwing amiibo is the only figure confirmed to work with the new Switch version of the game. What does it do? Tapping the amiibo to the right Joy-Con enables Link to move between Skyloft and the world down below at any time without the need to find a specific location — a brand of ‘fast travel’, if you will. Handy! Response to the notion of ‘locking’ this feature behind an amiibo purchase has been mixed, to say the least, and as you can see below, this Loftwing amiibo also costs more than your average Nintendo-branded NFC figurine. Still, try as we might, we’re finding it difficult to resist.

If you’re looking to land a Loftwing alongside the Switch launch, check out the best Skyward Sword amiibo pre-order deals we could find below. We’ll update this article with new deals as they crop up, so be sure to check back.

ShopTo are the cheapest retailer in the UK for the Zelda Loftwing amiibo right now, although they’re sold out at the time of writing. GAME pre-orders are now live, too, although watch out for shipping and collection charges. The Nintendo UK Official Store is the cheapest option at the moment:

Pre-Order The Limited Edition Zelda: Skyward Sword Zelda Loftwing amiibo In The US

The Skyward Sword Zelda Loftwing amiibo is $25 in the US, although pre-orders have sold out from several of the usual suspects. Keep your eyes peeled on this page for restocks and new deals.

Do you plan on picking up this amiibo with the game? Let us know below.