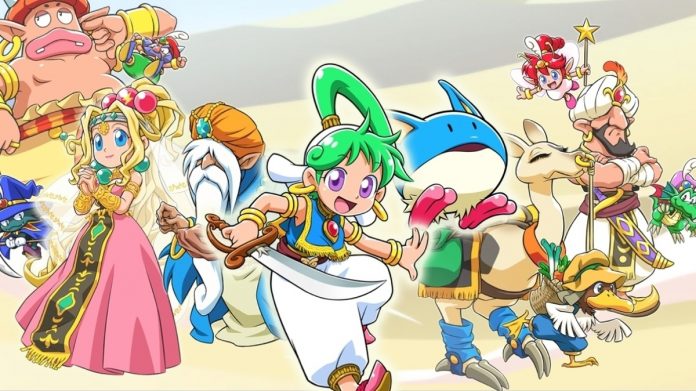 The coins were all it took. A sudden burst of them, twisting into the sky and then scattering along the ground. Thick coins and golden, edges wide enough to spin and spin and never fall flat. Mario has the best coins I guess, using dancing, dipping lines of them to lead and to teach. But Wonder Boy has my favourite coins, each downed baddy lobbing them into the air in greedy gouts.

Wonder Boy: Asha In Monster World is a remake of Monster World IV, a mid-1990s sequel to Wonder Boy 3: The Dragon’s Trap – a mid-1990s sequel that never properly got released in the west at the time. I am not a Wonder Boy expert by any means, and the history of this series seems dense and tangled. What I am is a Wonder Boy enthusiast, and particularly an enthusiast for Wonder Boy 3, which seemed, when I was eleven, to be a game so beautiful and rich that the world did not fully deserve it. It looked like a platformer, and you certainly jumped and raced around. But the world erupted in all directions – fall off screen, and you would land somewhere else. To ruin this with the dry bones of genre, it looked like a platformer but it thought like an RPG. I guess you’d call it a Metroidvania now, but back then it didn’t feel like anything other than a kind of magic: a world branching off all over the place.

It’s been a decent few years for people who love that game. Firstly we got a deft and loving remake of Wonder Boy 3. Then a spiritual successor, Monster Boy and the Cursed Kingdom, an original beast that took the ideas in Wonder Boy 3 and twisted them into strange and new – but oddly harmonious – shapes. Now, we get this remake of that bona fide sequel to the original Wonder Boy 3. A cheerful lead, a middle-eastern-tinged setting, a very minimal plot to worry about – you want to be a hero, and here are some elemental dungeons to go and be a hero in. This is the game I never got to play back in the day. And now it’s here.

Actually, if you buy the Switch physical copy, it’s here twice. The physical copy on Switch – and only the physical copy – comes with the original game and the remake. The original is a pixel-art joy to look at, a 16-bit treat in its chunkiness and its loving animations and rich sense of colour. The remake, which is the main event, opts for a 3D take on 2D game design. It’s bright and friendly, and it has moments of beauty in amidst the slightly generic cartoon look. There’s a lovely misty jungle at one point. There are some wonderful sodium-stained clouds against a darkened sky. And the coins still look wonderful, flying out of enemies and positively erupting from bosses. Greedy gouts.

I find it hard not to see this game through the lens of Wonder Boy 3. Apologies. What I would say in that regard is that its dungeons are more intricate, with an emphasis on puzzles – not always great – stuck in amongst the platforming. Also the platforming is more involved too. You have a pet for a lot of the game who grants you a double-jump and a sort of downward glide, and who gets you out of a lot of fixes, blocking vents, extinguishing flames, and generally being a bit of a pal. A pal even though you spend a lot of time sort of chucking them about the place.

Actually, the combat’s more involved too. Up and down-strikes – did Wonder Boy 3 have those? I genuinely can’t remember – and a super attack that is powered by doing more basic damage. Also, busier areas – which can sometimes tank the frame-rate on Switch, but I gather the other platforms are much smoother – will make you rely on a shield to block incoming stuff while you hand out justice elsewhere.

It’s very nice moment-to-moment, but it feels a little smaller in terms of imagination and a little more tightly organised than the wayward thrills of Wonder Boy 3. A shame. The sprawling way that the hub world connects to the rest of the world has been reined in, I think, though lazy summer holidays of slowly unpicking Wonder Boy 3’s secrets with schoolfriends may have lead me to think it’s more intricate than I remember it being. Instead, I think the hub is much larger here, and is home to a lot of intricate back-and-forthing as you work out how to open the themed dungeons, but then once you’re off to the dungeons themselves the whole thing feels a bit more traditionally hub-and-spoke. If Wonder Boy 3 was a world that sometimes felt like levels, Asha is very recognisably a game with different levels that is trying to feel like a world.

It’s a relatively short adventure, but incredibly tough in places and very dense with ideas – each dungeon throws a bundle at you, and several times I realised that this differs from Wonder Boy 3 in part because it was clearly created in a post-Sonic world. It steals a little from the Hedgehog, perhaps, and always cleverly. In terms of cleverness, there has also been a tweaking that goes beyond graphics themselves and into the systems. You can save wherever you want now, and there’s a little less need to meddle around inside menus. I think you can now return to previous levels to clear absolutely everything out. But the game still feels like it came from the mid-1990s, which is, of course, as it should be.

Asha doesn’t utterly blow me away in the manner that Wonder Boy 3 did, but it couldn’t really, given the magical circumstances in which I first encountered the earlier game. What I love about Asha, though, is spotting the things that would probably have blown my mind back then. Fans turning neatly in an early dungeon make things feel intricate and alive, then there’s the sheer number of those coins a later boss dissolves into, or a very nice palate-cleansing section with a bit of space to it. And mostly, the game’s big trick at the time, I suspect, the way you can move back into the screen, going into houses and shifting through stacked planes of 2D levels, as it were, giving a sense of density to the dungeons and turning a central building in the town into a proper wonder, built for exploration and lovely art design.

This is good nostalgic fun, in other words: a platformer where you can collect coins and buy better loot and work out the various nooks of the hub world before jetting off on a series of pretty adventures that all build pleasantly to a final boss. Asha is a decent platformer, handled with love and attention to the details, and it’s a part of one of console gaming’s most interesting lineages.